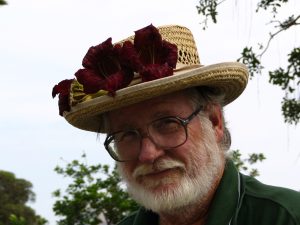 Sunset Boulevard … been there, done that. Twenty-six miles from the river to the ocean.

Los Angeles River … been there, done that. Fifty-two miles from Canoga Park to Long Beach.

Santa Catalina Island … been there, done that. Twenty-six miles across the sea. Not much of a walk, but we deserved it after walking every mile of the Los Angeles River.

So, what’s next? We need a project, just walking around your own neighborhood, the same streets over and over, gets old pretty quick. But you can’t let the moss grow on your back, nor the grass under your feet, or you’ll soon be ready for the rocking chair, then the wheelchair, then the Do Not Resuscitate sign on the foot of your bed. That’s the ultimate destiny of all of us unless we get run over by a truck, but you want to put it off as long as possible. 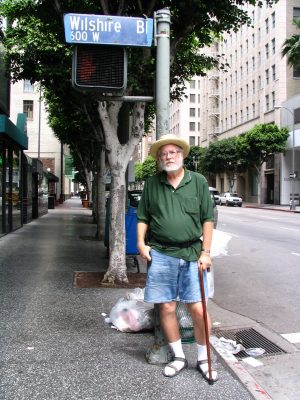 I briefly considered Mulholland Drive, which winds along the spine of the Santa Monica Mountains not far from us. It offers spectacular views of the Los Angeles Basin and the San Fernando Valley. But much of it is too up-and-down for my arthritic knees and hips to bear, and there are no sidewalks. I don’t think we want to face cars coming around mountain curves 100 times a day. That’s not my idea of fun.

So it’s going to be Wilshire. It’s about as cosmopolitan as a street can get, urban all the way except where it goes through a few manicured parks and country clubs. Until they built all the skyscrapers on Bunker Hill downtown, it also sported some of the bigger buildings in LA. From a high vantage point, like the Getty Center, you can pick out Wilshire by the clumps of tall buildings along the Miracle Mile, Wilshire Center, and Century City. Plus, it has excellent express bus service, so we can walk as far as I can stand it and then take the bus back to the car. I really hate backtracking.

Some have called Wilshire Boulevard “The backbone of Los Angeles.” The city used to pretty much end at MacArthur Park, which at the time was called Westlake Park. Then they built a causeway over the lake and extended Wilshire to meet the former Orange Street, which was re-named, and now reaches the ocean. It’s probably the busiest street in Los Angeles.

It begins at the south end of Bunker Hill, formerly the site of the mansions of the city’s rich folks, now the home to glass business towers and, increasingly, condos. Unlike the numbered streets that run east and west through downtown, Wilshire come to an abrupt stop at the One Wilshire Building. We parked near the 7th/Metro station, where the Blue Line trains meet the Red line, and walked a few blocks east and north to One Wilshire, and headed west. 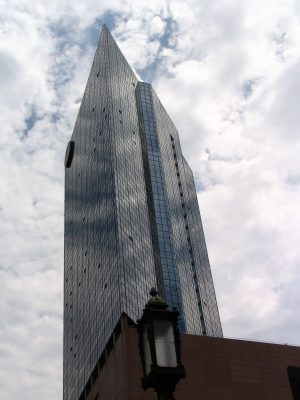 For the first four blocks there’s pretty much nothing but skyscrapers, though if you look north at the first block, Hope Street, you will see the beautiful and completely restored (after an awful fire in 1986) Main Library Building, which is definitely worth a visit. Not a lot to say about most of the other buildings except that they are tall. Well, some of them have some pretty nice fountains, but it’s basically an anti-human environment. But as soon as you cross the 110 Freeway things get down to a more manageable scale, though there are still some pretty awful buildings. One 40-or-so-story triangular glass sliver might as well have a sign on it: “Exactly The Sort of Place John and Lee Would Hate Living In.” Windows you can’t open? Ten stories of parking before you get to the condos? Sorry. Not even the pool on the roof would tempt me to live there, even if I could afford it.

We started off hungry, which is not our normal practice. Usually we walk, then eat. But soon we came to a place I’d been wanting to try, La Parilla (The Grill), which is in a very weird building that looks like it sort of just grew over the years. It might have begun as a house. It has conical turrets here and there, and some of the interior looks as if it might have been living rooms and hallways and such. They have a terrific menu and the food is much better than you usually get in American/Mexican places. A sign says the LATimes picked them as the best downtown-area Mexican restaurant, and I can believe it. (No way to pick a Best in LA Mex place, there are a billion of them.) Their specialties are molcajetes, which seem to be mixed dishes served in those stone grinders, and paradilladas (mixed grills), served for two, at around $30 and up! We had stuff off the regular menu, enchiladas suizas for me and barbecued ribs for Lee. 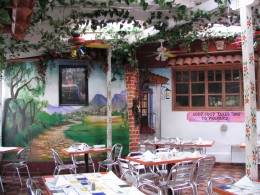 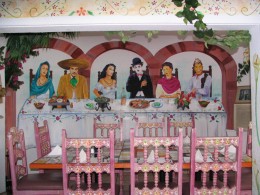 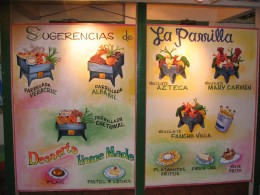 After we ate we went exploring the maze-like building. The interior is very pretty. There is an airy patio where they make the tortillas by hand. The walls are painted with the stuff you’d expect, scenes of small villages, senoritas in colorful skirts, and even items off the menu. But then there is the Charlie Chaplin Banquet Room. Now, there’s no reason why a Mexican restaurant shouldn’t honor the little tramp … but it’s not what you’d expect, is it? There is a mural of Chaplin sitting at a table with Frida Kahlo (have you noticed that ten years ago nobody knew who she was, and now you can’t visit an Hispanic establishment without seeing her picture?), Cantinflas, Pancho Villa, and … is that Rita Hayworth? I can’t tell who the other woman is, either, except she looks a lot like the Virgin Mary.

They served us an orange tortilla that was very good and tasted vaguely like pumpkin. We asked the waiter what was in it … and his English, it not so good, he no could esplain … so we said never mind. A few minutes later he was back with a lump of dough and a saucer of the excellent hot salsa we’d been eating. He started to mix the salsa into the dough, and presto! It turned orange. For going this extra mile for us we increased our already generous tip another 5%.

Pretty soon you come to what is probably the most downscale part of Wilshire: Westlake and MacArthur Park. Which is not to say it’s cheap. It used to be a real bad area, but it’s been cleaned up a lot. (When they drained the lake to construct the Red Line tunnel that now goes beneath it, guess what they found? Hundreds and hundreds of handguns, no doubt tossed in there because they were too hot to keep, having been used to murder somebody.) Signs at the park entrances today warn you that dealing in cocaine, cocaine base, heroin, etc., will get you an extra year in the hoosegow. Lee pointed out that that just means the dealers have to move across the street, which they probably did, but at least it keeps them out of the park. The sidewalks swarm with vendors and a continuous crush of pedestrians. Regular people, families, use the park now, not just thugs. They’ve even brought back the paddleboats. But I understand it’s still the place to go to buy phony ID, and there’s a thriving market in bootleg DVDs. 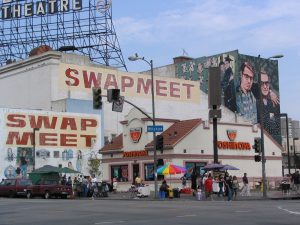 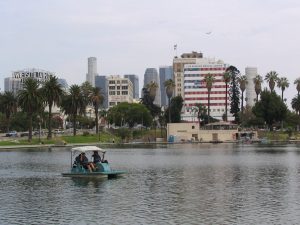 Westlake was originally a swanky area because of its proximity to downtown jobs, with big beaux-arts apartment buildings, most of which are still there, still looking imposing and gorgeous, though some of them have been subdivided into cheaper, smaller accommodations. There was a large Jewish population. Later a large Filipino community developed in the north part. Lately, it’s become home to Salvadorans and Guatemalans, and is the most densely populated neighborhood of LA. They still have jobs downtown, sweeping up and running parking lots and being security guards. 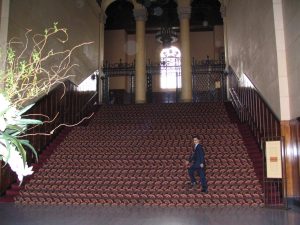 About a block north of the park is the Park Plaza Hotel, which apparently isn’t being used as a hotel anymore. It’s a glorious building, with terra cotta figures at all corners and a grand lobby with a wide staircase, and ballrooms off to each side and upstairs. Lee managed to snap a few pictures before a security guard told her there was no photography allowed. We’re running into that a lot these days. I guess I look like Osama, or something. 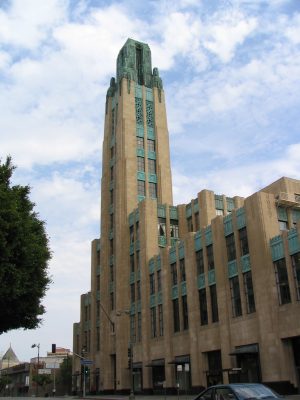 Next is Lafayette Park, right on the edge of the Wilshire Center neighborhood. The park is almost all playing fields of one sort or another. The landmark building in this area is the old Bullock’s department store, now a law school. This is where we rode up to the highest floor available to the public and saw Wilshire filled side to side as far as the eye could see in either direction with marchers peacefully protesting immigration policy. The estimates ran as high as half a million people, and I believe it. Probably half of those were here illegally. And you tell me you figure we can solve the problem by sending them all back home? What are you smokin’, dog? I just learned that at least 500,000 of these illegals in America work for … wait for it … the federal government! At least their SS numbers don’t match up. Oh, boy, you think you want less government, do you? See what happens when the brown people who do the grunt work all get deported. You ain’t even imagined chaos yet … 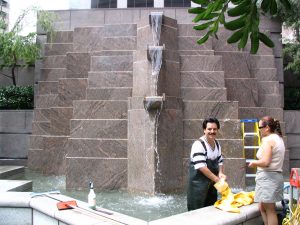 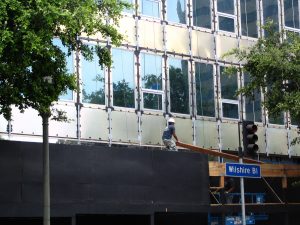 Enough of that. You gotta love old buildings like this. It has a tower that you can pretty much see right through. Looks like there are stairs in it. It really can’t ever have had much use, unless it was for Mr. Bullock’s office, where he could piss down on the peons below. But I think it was erected simply for the joy and beauty of the thing. It is made of real stone, with copper highlights the same color as the Statue of Liberty. This was the flagship store of the luxury chain that was looted, gutted, and dismantled by corporate raiders sometime in the ‘80s. They managed to run a highly profitable enterprise into bankruptcy, disastrous mergers with I. Magnin and Federated, and killed the whole thing off in just a few years. Capitalism at its finest! Not that I’d ever have shopped there. This was the kind of store where they’d sit you down in a comfortable easy chair with a glass of champagne while models paraded the outfits in front of you. 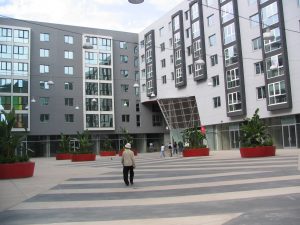 Pretty much right across the street from this magnificent old lady is the Red Line Wilshire/Vermont station, which is cleverly hidden (just on the off chance that an out-of-towner might try to find it) in a spanking new 7-story urban monad of astonishing sterility. Oh, all right, they spruced up one end with a colorful op-art mural that seems to show a thumb on the edge of cereal bowl. And okay, it’s pretty much empty right now, all the ground-floor shops vacant, no sign of life in the half-mirrored windows above … but after people move in, there will still be no sign of life. There are no balconies. What’s with that, architects? Here we are in one of the most hospitable climates in the world, and you keep throwing up these boxes for people to “live” in that take absolutely no advantage of that. Even the little postage-stamp balconies on so many SoCal buildings are better than nothing. There’s room for a couple of chairs and a potted plant or two, and you can sit outside in the sunshine and smog. How expensive could it be to add that little humanizing touch to your soulless cubes?

This is the eastern edge of the neighborhood known as Koreatown, where signs in Korean far outnumber the signs in English or Spanish, and the end of the line for us on the first day. We boarded the train and rode it back to the 7th Street station, and then home.