Getting off the road.

We were on our way to somewhere else, never mind where. We are always alert for stuff off to the side of the road. We have had some of our most interesting adventures just by happening on some event or location. 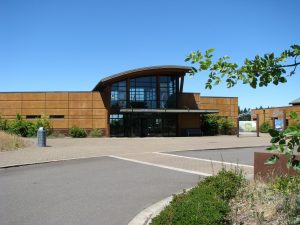 This time I spotted a small sign and looked off to the right and thought I saw a little building. The sign said something about a wildlife refuge. I like visiting places like that. Roadside observatories where you can see herds of elk grazing. Fish hatcheries a few miles off the main road. You can see literally millions of young salmon in long tanks, and adults swimming back there, to the place of their birth. But you have to get off the road. 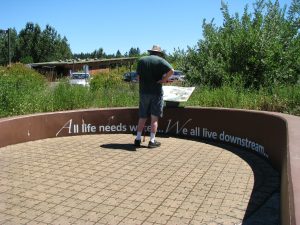 So I turned around, and we entered a driveway that led to the Tualatin River National Wildlife Refuge.

The visitor center is small, but beautifully done, staffed by enthusiastic volunteers. “Look! Look! A bald eagle!” A bank of windows looked out over a large wetland, and spotting scopes were positioned so you could look for birds. Just mallards and cranes, today. I didn’t see the eagle.

Then there was a room that showed the history of the area, and the story of the building of the wetland and center. Yes, they built the wetland. That area has had explosive growth, something like five times the population in ten years. This was a green, green, green project, in the best sense of the word. 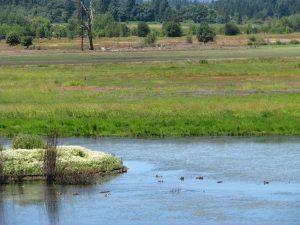 (As I regarded it from outside, I thought “There are some things that government does well.” I, too, often feel that the Gov is too big, but damn, leave stuff like this alone!)

One thing that was covered inside was something we had heard about before, but even in the Pacific Northwest I don’t think most people know. It is the Missoula Floods. Everything about them is so damn gigantic that it’s hard to believe, but they really happened.

It was at the end of the last Ice Age, between 13,000 and 15,000 years ago. The Cordilleran Ice Sheet reached south as far as present-day Spokane, and covered most of Puget Sound. Vast ice dams formed, blocking water that wanted to flow to the sea. It happened as many as 25 times over those years. Then they ruptured, for reasons too technical to get into.

And all hell broke loose … 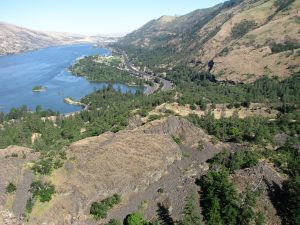 When a dam broke, the water coming down the Columbia Gorge was equal to ten times the flow of all the rivers in the world! The Amazon, the Nile, the Congo, the Ganges, all trickles compared to the Columbia!

The water traveled at 80 miles per hour! And deep? The highest waterfall in Oregon is Multnomah Falls. It is 620 feet high. There would have been no waterfall, it was that deep.

The water completely covered the future site of Portland. There was no Willamette River, it became Willamette Lake, and it extended all the way to Eugene!

See what you can encounter if you get off the road now and then?