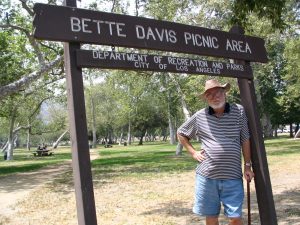 Burbank: Just across the river, between Riverside Drive and Rancho Avenue, is a little triangle of park land that bears the sign “Bette Davis Picnic Area.” You’re always running across stuff like that in the LA area. Last week we were in the Norton Simon Museum in Pasadena looking at 19th Century art, and Lee noticed two small canvases that said “Gift of Mr. Cary Grant.” Deeper into Burbank is Bob Hope Drive—the Burbank Airport was recently named after him, too—and Johnny Carson Park.

That’s nice, but it just seems to me that Bette ought to have something more substantial named after her. A park is fine, but it should be a more elaborate park. Think of the missed opportunities. The Whatever Happened to Baby Jane? playground, and The Little Foxes petting zoo. The Now, Voyager paddleboat rides on the Whales of August lake. The Corn is Green community garden. We could have the “What a dump!” public restrooms. Then you could name each of the picnic areas: The Virgin Queen, All About Eve, Dark Victory, Jezebel, The Petrified Forest, Of Human Bondage … just a thought. 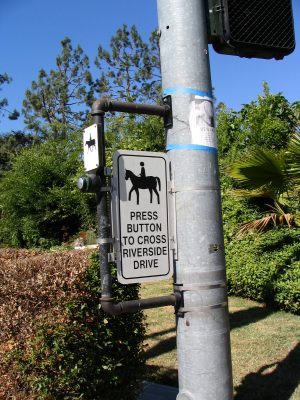 Here’s something I didn’t know. The southern edge of Burbank may contain more horses per acre than most comparable areas in the wide open countryside. There’s the huge equestrian center, which looks to have dozens of stabling businesses, big show rings, maybe a polo field. Our march outward brought us to the big gate that leads into the area, but we didn’t go inside. We turned north in search of the river (and I’ll get back to that), and found we were in an “Equestrian neighborhood.” It seems that everything east of Main Street, and south of Alameda Avenue and Victory Boulevard is horse friendly. And you might not even notice it at first, especially if you’re driving through. You might see horses here and there, and notice that as well as bike paths on Riverside Drive there are horse paths. You might notice horse trailers, and a lawn jockey or two (all white; in our horror of racial stereotypes we have gone so far in the other direction you might think that no black people ever handled horses), but the sheer number of horses all around you might very well escape your attention. 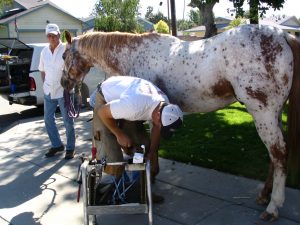 Not when you’re walking. Soon you see that many of these fairly ordinary houses have stables behind them, maybe even the majority of them. Room for one or two or maybe three horses back there. We saw at least one very large apartment complex that has not only a parking space for your car, but stable space for your four-legged friend. And there are a lot of horse trailers, some of them big enough for half a dozen nags, and a lot of lawn jockeys and horseshoes and horse heads and such used for decoration. You encounter more and more people on horseback, many of them women of that tall and thin variety that so often means “horse nut.” Most are riding English saddles, and all manner of horseflesh is on display. Here’s something I never expected to see in Burbank: An appaloosa (we had to ask; I can tell a Clydesdale from a thoroughbred, but that’s about the extent of my knowledge) named China Cowboy being shoed in a suburban driveway! The blacksmith operated out of a pickup truck that must have weighed three tons with the anvils and shoes and other hardware. It was such a delightful sight. 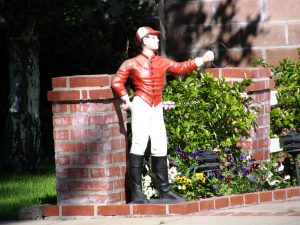 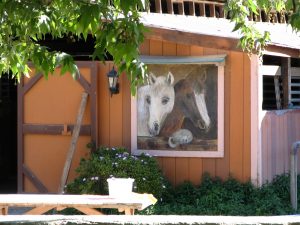 Now, about that river …

Shortly after leaving the Bette Davis picnic area the river curved to the north within its concrete banks. That seemed a little strange to me at the time, since I knew it flowed generally west to east, but I assumed it was just a kink. Surely it would curve west again after a while. At the same time it got quite a bit narrower. Well, that was to be expected, all rivers do that, right? I had somehow managed to misplace the Google map I had printed out, but it wouldn’t have shown the course of the river, anyway. For some reason, it was no longer included on the map from that point. (You can see I’ve had to draw it in, using satellite photos.) Later on, a smaller tributary branched off, and then vanished under a culvert, never to be seen again. I was at a loss. Which way? When we reached Main Street by the Equestrian Center gate I didn’t know where to go. 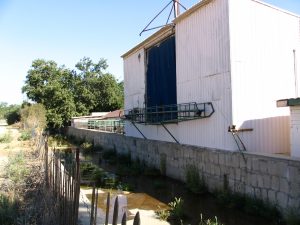 Now, we all know the Los Angeles is a trickle, a pissant compared to, say, the Ohio or the Monongahela, but still. I have a pretty good sense of direction. A time or two it has taken me a while to find a freeway entrance, but I’ve never lost one. I once lost my car keys. I lost my girlfriend in 1967, but she didn’t want to be found again. I’ve lost my patience many times, a few times I’ve lost my temper. But I’ve never lost a whole river.

We figured it out later. Lee had been walking along the river fence and I had been sticking closer to the horse trail. The trail emptied into a wide dirt area and I could see the fence curving north ahead of me, so I angled over that way. What I failed to notice was that there was a big confluence over there to the south, with the river going more or less straight and some nameless (so far as I can tell) channel curving to the north. We ended up following that, since I assured Lee that this was the river, and Lee’s sense of direction … how can I put this diplomatically? … is not the best. Soon we were hopelessly lost … well, wait a minute, I’m never actually lost, I always know where I am, but I sometimes don’t know exactly where I want to go is … we were casting about, let’s say, in the wilds of Burbank, surrounded by horses and horse droppings. We meandered to Victory Boulevard, then through a few side streets, and finally found our way back to Riverside and thus to Bette Davis and the car. So you see, if Lee had told me (well, maybe she sort of did tell me, but I was sure she was mistaken) that the river went straight we could have crossed on a horse bridge, of which there are many in that neighborhood (get it? neighborhood?), and continued on along the river. So it was Lee’s fault.

But what the heck. If we had gone on that way what we’d have mostly seen is more river and more horse turds, and the neighborhood around it was infinitely more interesting, and we got to watch an appaloosa being shoed. So it worked out for the best.