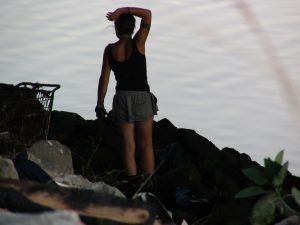 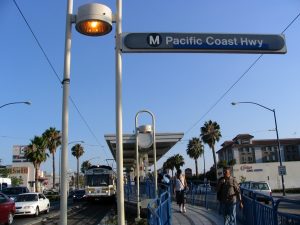 The title above is accurate in more ways than one. It would be the last leg of our epic riverwalk … and I was on my last leg. We had walked two days in a row, which we usually don’t do, and that turns out to have been a mistake. The next day my left knee was sheer agony. I could hardly walk at all, and just hobbled around the apartment when I had to, and spent the rest of the time with an ice bag on my knee. It helped, but only temporarily. Thus, we were becalmed for a day, with our goal tantalizingly in sight. I felt like Ahab spotting the White Whale, but unable to pursue it. Moses gazing into the Promised Land. Barry Bonds unable to get homer number 755. (Pop a few more steroids, Barry!) The Little Engine That Couldn’t. 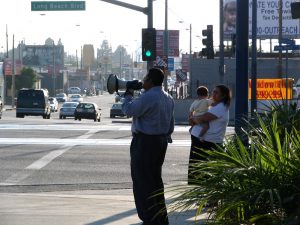 But the next day I was feeling better. I couldn’t do stairs, but as long as I walked along on the straight and level I was okay. We decided to chance it. So … the Red Line to the Blue Line … yada yada yada … off at the PCH station … bada-bing bada-boom … and a long wait for the 171 Long Beach bus, since I didn’t want to re-trace our steps the ten or twelve blocks back to the river and arrive there already pooped. It might have been better if we had, though, as for twenty minutes we were entertained by a sidewalk preacher with a bullhorn and no audience except the passing traffic and our miserable, trapped selves. I spent the time wondering if it would be worse if he was bellowing in English; probably, because then I’d be able to understand his insane bullshit about Cristo and taking Him into your corazon and all that doomsday Christian jazz. Standing beside him was his stoic, little round wife, holding their infant son and ready to pass out leaflets to anybody who wanted one, which was nobody.

It was way beyond irritating, and very sad. It brought up some vague memory of a book I had to read for some literature class in high school, I’m pretty sure it was Dreiser’s An American Tragedy, which had a scene of a young boy and his feelings of humiliation as his fire-and-brimstone street preacher father harangued the passing crowds. I felt very sorry for that little child, growing up with a father like that. Frankly, I wanted to kill him. I detest religious fanaticism. I think it is a blight upon the human soul, whether it is Muslim suicide bombers or believers in the Rapture.

Oh, well, on to more pleasant things, because this last walk was a doozy, almost making up for the last three or four snoozys. 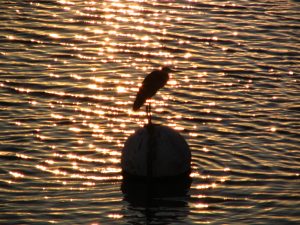 This stretch of the river was also full of trees, shrubs, and grasses, and really alive with birds. We saw our first seagull of the trip, and soon after … a pelican! Look, Lee, a pelican! Soon we were seeing dozens of them, many perched on a concrete embankment that stretched across the river and had become Seabird Central. There were red-beaked terns hovering, looking down with eyes that must be incredibly sharp to spot fish from that high. They would dive-bomb the water, or skim along it with only their lower jaws tracing a line in it, until they snapped something up. We saw a bird perched on a round float that might have been a heron, or might have been an anhinga, or might have been a bittern. It was hard to tell.

It was also Homeless Central. Never had we seen so many encampments of homeless people, and these were without a doubt far upscale from most of the folks we’d seen up the river. Most of them had tents, or at least tarps stretched between the trees. There were a lot with bicycles. They were located down a pretty scary slope of large rocks that I’d hate to have to pick my way over, but once down there if you spread a sheet of plywood and then pitch your tent it looked a lot nicer than a hole under a freeway bridge. There were propane stoves, and tables, and chairs, and just a general air of a lot more neatness than we’d seen before. One very determined gentleman had made a sort of fortress of stones around a single broad tree, and was sitting beneath a nice parasol. 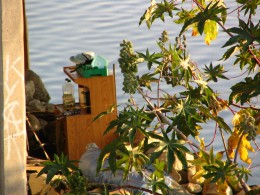 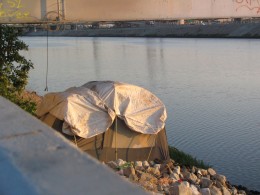 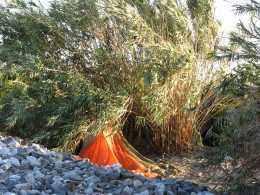 This was the day after the bridge collapse in Minneapolis, and wouldn’t you know it, we passed under more bridges this day than on any other I can remember. The one that carried Ocean Boulevard looked sturdy as Gibraltar, but I can’t say the same for the others. There were a lot of rusty bolts in evidence. You walk under one of those things in Southern California and you look up, and you think “Wouldn’t it be awful to be here if an earthquake struck?” Now we know it doesn’t take a quake. There are tens of thousands of bridges in the country that are in as bad shape or worse than the one that fell down up north, due to decades of neglect by governments that won’t raise taxes—which will have to be done—to pay for keeping the infrastructure in good repair. We’re going to be seeing more of this sort of stuff in the future, you can count on it. 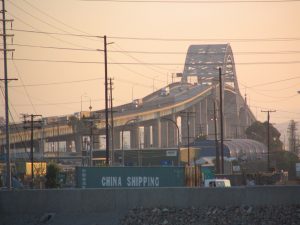 Soon we could see the Gerald Desmond Bridge, one of the few of the many LA County bridges that is actually high, for the cargo ships to get under it. (And which, by the way, was opened in 1968 and needs replacing. Glad we didn’t have to walk under it.) Then Lee spotted a cell phone tower masquerading as a palm tree. Why don’t they do more of that?

… It just occurred to me that maybe they do, and they’re so well-camouflaged that I just haven’t spotted them …

At the Golden Shore Marine Reserve—a mighty grand name for about an acre of marshy ground returned to the state all of the Long Beach shore used to be—we left the bike path, as it dead-ended a short way ahead. Then we were in the city itself, walking along the docks. The high-speed Catalina Island catamaran was docked there.

Then it was under the Queensway Bridge … and there she was, in all her orange-stacked glory. The Queen Mary. The end of the line. The bridge marks the fuzzy boundary between the Los Angeles River and Queensway Bay (though we’d been on a tidal estuary for some time), which is an arm of the Pacific Ocean, though it’s hard to see the sea from here what with all the breakwaters, moles, levees, and such of a modern port. Two huge tankers were visible at anchor out there, waiting to unload more oil for a thirsty America. 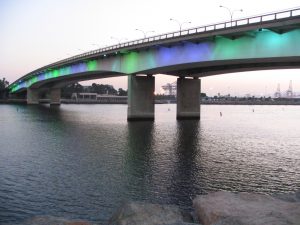 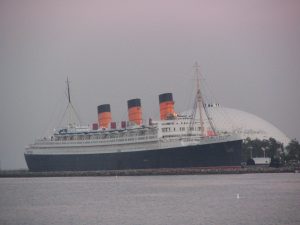 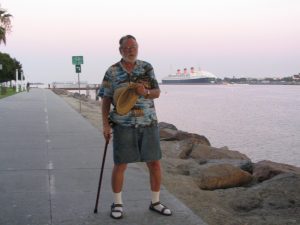 It was getting dark, and the bridge is illuminated at night by alternating green and purple lights. It’s quite pretty. My $5 Fashion District straw hat was already beginning to show its age, so I decided to chuck it into the river, as I’d done at the beginning of the river up in Canoga Park with a sweat-stained canvas Aussie hat. Lee was going to take a picture of it, try to catch it in the air … but there was a bit of miscommunication. I asked if she was ready, and she said no, and I thought she said go … so we missed the moment. (I swear, sometimes I think we both need hearing aids. What? I said … never mind.) As it turned out, the hat didn’t reach the water, but landed about halfway down the 45-degree slope made of boulders the size of Shetland ponies. I thought about easing my old bones down there, bringing it back up, and trying it again, like the flag-raising on Iwo Jima … no way! I’ve done a lot for you, my faithful readers, in furtherance of our motto, “We’re doing it so you don’t have to!” But this was beyond the call of duty. You’ll just have to imagine my hat flying off into space like a third-world flying saucer …

Onward, beside the excellent aquarium, to The Pike at Rainbow Harbor, which used to be just The Pike, a big amusement park famous for its two-track racing roller coaster. They tore it all down in 1980 and it stood empty for a long time, and they finally built this new area in its place, all cleaned up, ready for the tourists. It’s thick with restaurants, mostly of the medium-to-upscale variety, and night clubs … but no roller coaster. There’s a very large sculpture that’s meant to invoke the idea of a roller coaster, it even has blue lights flashing in sequence along the “track,” but it’s a poor substitute. They do, however, have a vintage Ferris wheel and carousel.

We stopped in at Bubba Gump’s Shrimp Company, which in spite of the over-cutesy décor serves up some pretty good food. (Forrest Gump is a bit of a puzzle to us. I thought it was pretty good, Lee liked it less, but neither of us could figure out why it became such a monster hit, or why it won the Best Picture Oscar over Pulp Fiction and The Shawshank Redemption, both of which I believe will still be classics when Gump is forgotten, or why Tom Hanks—who I usually love—won Best Actor. Neither of us much liked his performance in this one. Oh, well.)

Up the final hill. Onto the Blue Line train at the Long Beach Transit center. One hour and ten minutes later, we get off at Hollywood and Western.

Am I glad we did it? You bet. Would I do it again? Not for a million … well, come to think of it, I would do it again for a million dollars, but not much less. It will probably not go down in the annals of exploration alongside Norgay and Hillary on Everest or Armstrong and Aldrin on the moon, but hey, I’ll be 60 in six days, and Lee is … a little older (but in much better shape). I’ve got knees with no cartilage in them, bare bones grinding on bare bones, and neuropathy in my feet. I need to lose … oh, a little bit of weight. And I now have walked the entire 52 miles of the Los Angeles River—some of it twice, there and back—and I wonder if as many as 100 Angelinos who don’t work for the Army Corps of Engineers or the LADPW have done that?