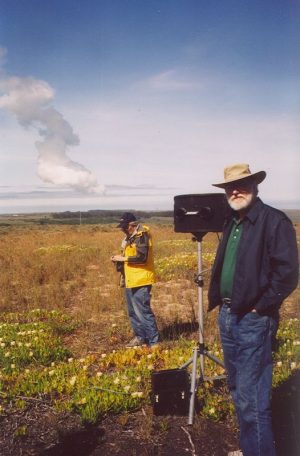 John Varley at Vandenberg after a launch

John Varley was born in Austin and raised on the Gulf Coast where he learned to run behind DDT-spraying trucks during heavy mosquito raids. Since then he seems to be immune to the bites of non-Texas mosquitoes.

His ticket out of the petrochemical stinks and hellish humidity of tiny Nederland, Texas, was a National Merit Scholarship to Michigan State University with plans to be a scientist. Science turned out to be boring. So did English and, shortly after that, school itself. He stopped going to classes except the ones where they showed classic movies. He once hitch-hiked from Detroit to East Lansing to catch a screening of Salvador Dali’s “Un Chien Andalou.”

After a year and a half he hit the road with a friend, ending up in San Francisco just in time for the “The Summer of Love,” which neither of them knew was going on. The first day there he sang and chanted with Allen Ginsberg in a hippie crash pad. He decided he was a hippie. He found out he is allergic to marijuana. That was a bummer, because people kept thinking he was a narc. So he smoked it sometimes, and threw up.

He criss-crossed the country for a while. He lived in Tucson where he met Linda Ronstadt before she got famous. He got caught in a traffic jam in upstate New York that turned out to be the Woodstock Festival; he couldn’t get out for three days. He dodged the draft. He spent six years with no visible source of income and still can’t recall how he did that. But it must have been harder than it sounds because, in 1973 he decided to become a Science Fiction writer. In other words, work.

He wrote a terrible novel in longhand, then learned to type and has sold everything he has written since then. Varley was one of the first writers to be called “The New Heinlein.” This flattered and troubled him, since the Old Heinlein was a major role model – and not yet dead.

He used to be a fast writer, but now he is very slow. He doesn’t know why. His post-hippie life has been the usual financial ups and downs of a free-lance writer, but he has never held another job. His work has been translated into 16 languages he can’t read, including Esperanto.

There was a ten-year hiatus in his career when he worked in Hollywood with such people as Douglass Trumbull, John Foreman, and David Begelman. He made good money and once had an office right at the Metro-Goldwyn-Mayer studio gate. He met Mel Gibson, Paul Newman, Sigourney Weaver, Charlton Heston, and many other stars. They were all shorter than he had imagined, except Weaver. (John Varley stands 6′ 6″ without his cowboy boots.)

Only one movie resulted from this time, and it was bad: Millennium, starring Kris Kristofferson, Cheryl Ladd, and Daniel J. Travanti. Varley takes the entire blame for this. He got out with his sanity intact, and has now resumed his book writing.

John Varley lived for a while in Portland, Oregon, with Lee Emmett, who has become his first editor. She’s good at it and full of useful suggestions. They had a nice apartment above a pretty good Italian restaurant which burned down shortly after they left. They shared a nineteen-year-old dog named Cirocco, who was the prettiest fat Sheltie in Oregon, even when she got so miserable with arthritis that they had to put her to sleep. They lived for a few years in a motorhome parked fifty yards from the beach on California’s Central Coast. They spent four years living in Hollywood in a neighborhood called Thai Town or Little Armenia, depending on who you ask. They currently live in Vancouver, Washington.