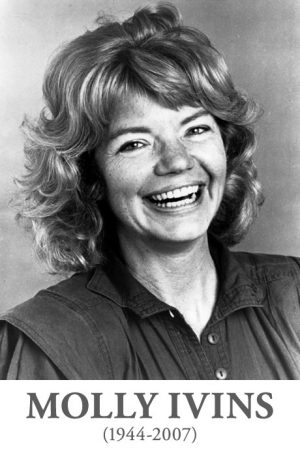 Yesterday a great American died. I’m speaking of Molly Ivins, perhaps the greatest enemy pompous windbags ever knew. She was from my native state of Texas, and after apprenticing in the wilds of Minnesota she was hired away to the journalistic cesspits of the Big Apple by the New York Times, whose editors wanted to spice up their dull, gray prose with a little Texas-style shit-kickin’. Well, the shit got kicked, and after she described a community chicken-killing festival as a “gang-pluck,” she was shown the door. Well, what did you expect, assholes?

She returned to Dallas and then Fort Worth papers, where, in syndication, she became the most popular progressive columnist in America. There, she got to see close up what a truly incompetent, idiotic, bumble-mouthed, mean-spirited, spoiled frat boy George W. Bush really was, as he put on his political training wheels in Austin. She tried to warn the rest of us that he was a lifelong failure at everything he ever attempted, and would surely be a failure at the Presidency, but not enough of us listened, and now we’ve got Iraq, and George W. Bush is widely seen as the worst president this county has ever had.

She always delivered her harpoons with a generous helping of down-home humor, but they still went right to the heart of the blubbery political leviathans she skewered.

Did she make a difference? Who the hell knows? Those same whales are still out there, feeding on the rest of us, and they probably always will be, but those broken-off spears sticking out of their hides will always remind us that Molly was there. The liars, grafters, Tom DeLays, shitbags, Dick Cheneys, embezzlers, Dennis Hasterts, racists, Trent Lotts, Donald Rumsfelds, profiteers, and all-around weasels must be breathing a sigh of relief today, but they know they were in a fight. We all owe it to Molly to keep up that fight.

When a former U.S. President dies, flags across the country are flown at half-mast for a period of 30 days. Driving around yesterday (1/31/07) I noticed that a lot are still flying there, though that Nixon-pardoning, Rumsfeld-and-Cheney-appointing, totally mediocre Gerald R. Ford died on December 26th. Enough already!

Here at Varley Dot Net, we are going to fly the flag at half-mast until March 2nd, in honor of an American patriot who outshone all but a handful of presidents: Molly Ivins.