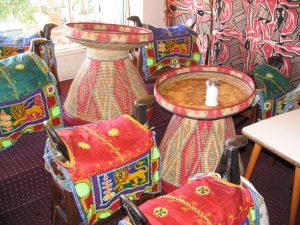 Los Angeles has one of the most ethnically diverse populations in the United States. I’ve heard that classes in the school system are taught in over 80 different languages. The huge majority of the ESL people speak Spanish, and come from one of the nations south of the Rio Grande. But there are large groups of other ethnic backgrounds, too, many of them not Christian, or only partly so. Koreatown is vast, and you can drive for blocks and see hardly any signs in English. There is Chinatown, and the post-concentration-camp remnants of Little Tokyo. There’s Filipinotown. We live in Thai Town, on the northern edge of Little Armenia.

Both last year and this one, we weren’t getting together with family, and thus were on our own for Christmas dinner. And like last year, we’d done the Thanksgiving feast only a month ago and weren’t in the mood for all that cooking in December, so we decided to sample some of the other Christmas possibilities.

In 2006 we celebrated a Jewish Christmas, at Hollywood’s least kosher deli, Canter’s on Fairfax. Bacon, ham, pork, and shrimp are all on the menu; also some of the best pastrami in Los Angeles. We ordered the traditional turkey, stuffing, sweet potatoes dinner, though you could get matzoh ball soup or gefilte fish as a side dish. I’m sorry to say it was only so-so. When you go to Canter’s, stick to the traditional Jewish fare.

This year we struck out even deeper into unexplored territory. There is an area of Fairfax that, since the ‘90s, has come to be called Little Ethiopia. There are about a dozen restaurants there, and other Ethiopian businesses. Technically Ethiopia is a majority Christian state, but the Muslim population is 30 or 40%, depending on whose figures you believe. So I thought of this as our “Islamic Christmas.” 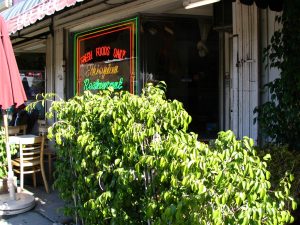 About half the restaurants on the street were closed, including Messob, which looks to be the best. We’d already eaten at Rosalind’s, so we tried the one right next door, Merkato, which means “market.” Inside it was elaborately decorated, with umbrellas hanging from the ceiling. (Signifying what, I wondered? Ethiopia is a dry country. Catching the rain?) At the front were some big basketry tables with what looked like small saddles instead of chairs. They were pretty, and exotic, but no one was sitting at these, and I prefer to lean back, so I was glad when we were shown to a more conventional table. We ordered spicy (and at these places, spicy can mean really spicy!) beef tibbs, and a veggie plate of lentils, collard greens, cabbage, and a few other things. While we waited we visited the connecting shop, where English/Amharic dictionaries were on sale, along with many Ethiopian products and souvenirs. Under a glass case was an assortment of blown glass pipes. Haile Selassie is the patron saint of the Jamaican Rastafarians; do the Ethiopians love their ganja, too? I didn’t ask. Everybody was speaking Amharic. 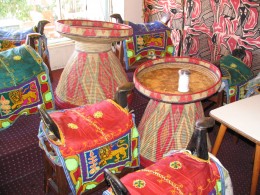 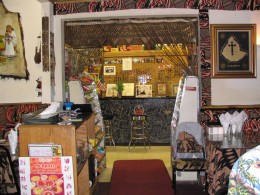 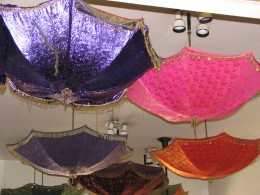 The food arrived, all together on a vast plate, covered by a vast round of injera, a spongy bread that is to this cuisine as the tortilla is to Mexican food … and even more, as food is served on it, and a plateful is served alongside. You tear off bits (it’s moist and almost rubbery) and use them to pick up the morsels of food. It was all good, hot but not too hot, and amazingly cheap. The bill came to $15, and the two of us could only eat about half of what was served. Plus, we didn’t have to listen to Christmas carols. Instead, they played Ethiopian traditional music … jazz!