Vanna White gets a STAR 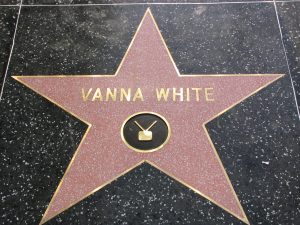 Walking down Hollywood Boulevard always makes me a little dizzy. It’s not that I’m overly impressed by the names of the people on the stars in the street—though you can’t help remarking on some of them you particularly like, from time to time (there’s Stan Freberg! and Ray Bradbury! and Crosby, Still, and Nash!). It’s just that I’m a compulsive reader, and no matter how I try not to, I always find that I’m reading all the names and before long my head is swimming.

For every Gene Autry or Jack Benny or Carole Lombard there’s an Al Pearce, Adele Jergens, or Lina Basquette. Who are these people? At one time, someone thought they were well enough known that no explanation would be necessary. Now they are forgotten. I remember a poignant sketch on “The Carol Burnett Show” where she was an old woman hanging around on the Boulevard, watching the tourists recognizing famous names. They’d come to one star and wonder who that was. It was her, of course, waiting to be asked for her autograph. She never was until Harvey Korman, whose star was close by, and was equally forgotten, happened along.

Harvey Korman. There’s a name I’ll bet a lot of young people have never heard of. When the Walk of Fame was first installed they did a whole lot of names at once. Now they add them one at a time, and always because this person is famous. But will they be in 50 years? In 100?

I remember my parents telling me, at the age of 10, “You can do anything you want.” Dad, we did it! ~Vanna White

We’d been in Hollywood four months before we realized you could attend the ceremonies when stars are installed on Hollywood Boulevard (and sometimes on Vine Street), and figured out how to find out when they were happening. These events are usually announced only about a week ahead of time, so you have to keep checking the website. We decided to attend the next one that came up, which happened to be Vanna White. It was about two blocks from the tourist madness in front of Grauman’s and the Hollywood/Highland Center. The crowd was not large, but then Vanna is an odd sort of star, isn’t she? Flippin’ those flippin’ letters for 26 years, about half of them letters that didn’t even need to be flipped, when they replaced them with TV screens … Merv Griffin was there, and Pat Sajak. So was Alex Trebek, though we didn’t get a picture of him. We decided this was sort of fun, and resolved to do it again when somebody interesting was getting a star. 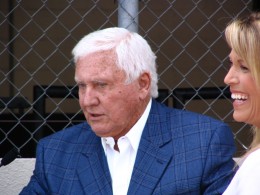 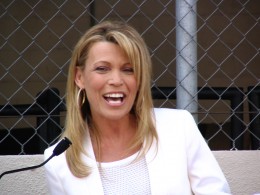 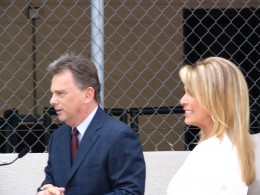