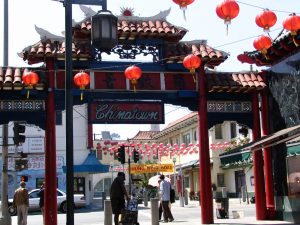 At last, we leave the Valley of the Shadow of Nudie and begin our journey down the river from the Elysian Park area. The next days promise to be a lot more interesting than the last ones. 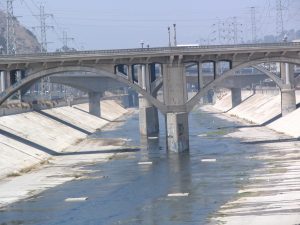 We parked on San Fernando across from the Goodwill store and “sheltered workshop.” That used to mean disabled people laboring for peon wages in aid of the dubious theory that they’d feel better if they worked at something. I don’t know if that’s still true. I know this stuff because my ex-wife was a disabled activist, and she hated Goodwill. 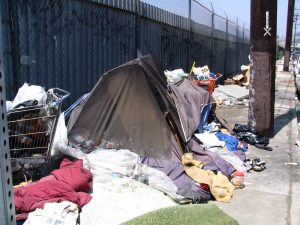 There are numerous bridges across the river this close to downtown. Almost every street has one. We got our first glimpse of the river from the Buena Vista Viaduct, built in 1911, restored in 2000. This is the far northern end of Broadway. We chose not to cross there but to go around the Downey Recreation Area, through an industrial district, and thus over the river at Main Street. On the way we passed somebody’s sidewalk campsite that was one of the messiest I’ve ever seen. This guy must have had 200 bottles of Olde English 800 malt liquor 40-ouncers in his tent and in shopping carts, and most of them looked to be half full. Now, if you were a wino, would you leave half a bottle of perfectly good popskull just lying there, unsavored? So … was it beer in those bottles? I didn’t want to think he was saving his urine, but you never know …

Ah, the pleasures of a walk along the scenic river.

Soon we were in Chinatown. Jake Gittes and Noah Cross and Mrs. Mulwray were nowhere to be seen. LA’s Chinatown is different from the one in San Francisco. For one thing, it’s flat, mostly, and I was grateful for that. We were both getting a little overheated. For another, SF’s Chinatown is dense, crowded, like so many places in the city by the Bay. LA’s is more spread out, and not quite so full of pressed ducks and live turtles and other really exotic foodstuffs displayed in the windows. There are plenty of Chinese (and Vietnamese, and Thai, and even Italian) restaurants, but you don’t get quite the sense of being in a foreign country, even though most of the buildings have those pointy things on the eaves to keep the dragons from nesting there. 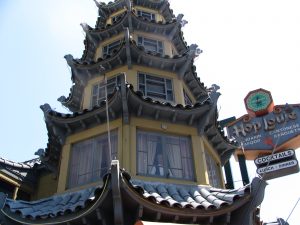 The tourist heart of Chinatown is a series of pedestrian paths with names like Gin Ling Way and Jung Jing Road. There is a plaza, and a fountain, and a statue of Sun Yat-Sen. I visited one of the places he lived during my brief visit to the People’s Republic. We were hungry, and decided to go to Hop Louie, an LA institution and the most impressive building in Chinatown, with a 5-story pagoda. We got the $4.95 lunch special, Kung Pao Chicken with fried rice and chow mien. It was ordinary. Lots of famous people have eaten there—as it sometimes seems in every decent LA restaurant—including Bill Clinton and Jackie Chan. Their autographed pictures are on the wall. 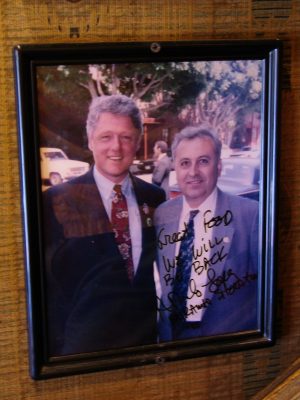 We’d cooled off a bit at Hop Louie’s, but the heat closed in again outside. We walked in the blazing sunshine through the bottom of the Solano Canyon neighborhood, barely seeing it, in my case, and just nicked the bottom of Elysian Park and the Portola Trail, whatever that is. The sign was too defaced to read. We decided to drive home through the park, which we hadn’t seen much of. You get some pretty damn fantastic views from the top of the hills there. We looked out over Frogtown, where our adventure began, to Glendale and Mount Washington. We wound around some more roads and came to a fairly weird sight: baseball diamonds. There were little league fields here at the very top of the park! 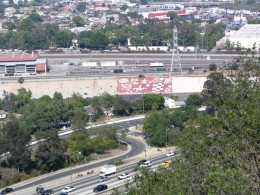 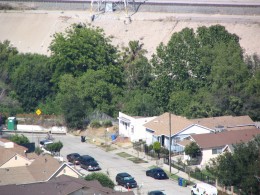 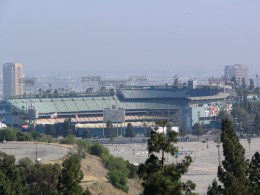 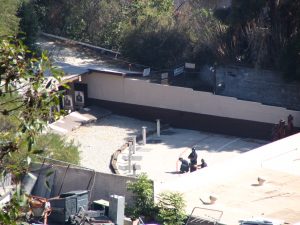 Leaving, we heard loud popping sounds. Firecrackers? Some asshole is setting off firecrackers after the two fires we’ve already had in Griffith Park, one of them caused by cherry bombs? We were all ready to call the authorities, and then I remembered. The Police Academy is in Elysian Park. We drove a little further and sure enough, down there in a little canyon was a firing range with two males and one female cop going through weapons drill. We watched and listened for a while. I’ve lead a fairly sheltered life, gun-wise. I’ve never owned one, and offhand I can only think of one time when I’ve ever even heard a handgun fired. I filed the sound away in my memory, so next time I hear it I won’t wonder if it was a car backfiring—as if many cars ever backfire these days—like so many witnesses report after shootings happen. It didn’t sound anything like backfire to me. It didn’t even really sound like firecrackers. It sounded like guns. Now I’ll know.

Last of all, we got a really good view looking down into Dodger Stadium. Then home, to prepare for the next leg of our adventure.