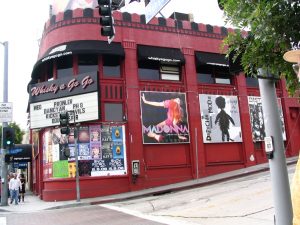 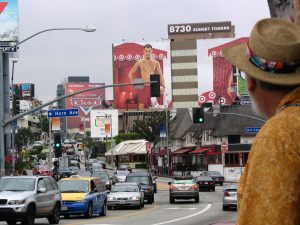 Parking on Sunset in West Hollywood is … not necessarily impossible, but very, very expensive. WH is probably not the only community in America that has installed computerized, solar-powered parking meters that accept Visa and MasterCard, but I’ll bet it was one of the first. You need an instruction manual or a cell phone with a tech support weenie in Bangalore on the other end to operate them.

When last we saw our intrepid explorers, John and Lee, they had made it to La Cienega, in the heart of WH. They were almost exactly one mile from the city limits of the residential areas of Beverly Hills, where parking is free and easy. (For two hours, anyway.) The streets are ridiculously wide and amazingly long, and there are few cars parked at the curb except those of maids, cooks, and gardeners. So we decided to park there and backtrack. 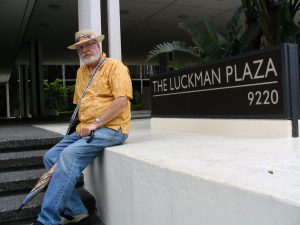 The first place we encounter is Luckman Plaza, where my agent, Joel Gotler, has his offices on the 8th floor. We met him for the first time a month or so ago, along with his assistants and office staff. He seems like a great guy, a go-getter. He says everybody’s looking for stuff right now. He has sold an option for my story “The Persistence of Vision” to a series to be called “Masters of Science Fiction,” on Showtime. So now I’m supposed to be thinking of other old stories, or new story ideas, and I don’t doubt he’ll push them as hard as he can. And now that we’re down here, I can actually meet with a producer or two and try to pitch a story. Something I’m terrible at, but if I have time to prepare, it’s a possibility. We’ll see.

Dick Clark Productions is in the same building. 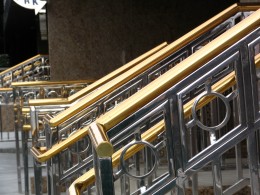 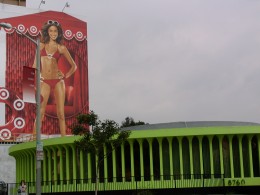 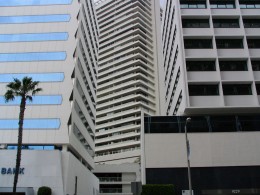 This is the heart of the toniest section of West Hollywood Sunset Boulevard, so what is the next big building we see? Why, it’s Hustler Hollywood! Mannequins screwing in the windows, wearing some stuff most bar strippers wouldn’t be caught dead in, not because it’s sexy, but because it’s cheap, low-quality, and tawdry … if that word has any meaning in this context. We hurried on. 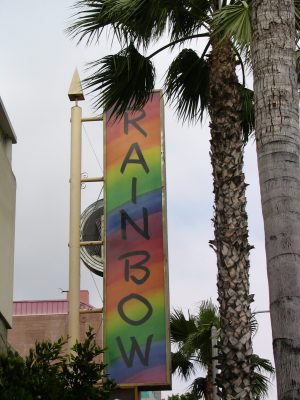 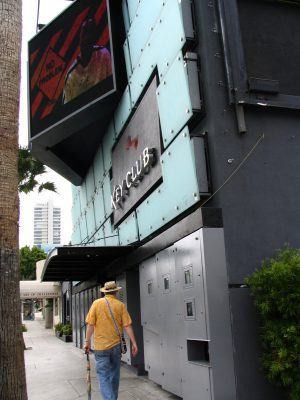 Just past that is the building that used to house the Playboy Club. (I think. I haven’t been able to find the old address, but I remember the bunny at the top of a tall, black building.) I used to love Playboy back when I was a teenager. Didn’t every young boy who wasn’t actually studying for the seminary? I thought the Playboy Philosophy was the berries, and didn’t see anything wrong with Hef’s lifestyle. Live and let live, consenting adults, have fun while you can and leave a beautiful corpse, and all that jazz. Nice cars, good music, beautiful women in bunny outfits … what’s not to like? Well, it hasn’t aged all that well over the years. But say what you will, Playboy was and is a classier operation than Hustler. I mean, I sold them a story, so how bad can it be?

The next stretch has an amazing number of businesses with no names at all outside. I guess you have to know somebody. 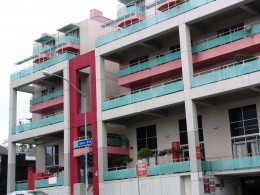 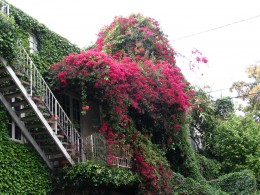 Then at Palm, we came upon something I’d been sure we’d encounter before we finished our Sunset hejira: a movie shoot. This is something new to me. When I lived here on the street in the ’60s, and when I came down frequently to work in the ’80s, I didn’t come upon a film crew shooting a movie every time I turned a corner. In fact, I don’t recall seeing such a scene at all. Now, in ’06, we’re seeing them literally everywhere. We hardly ever go for a drive without finding at least one shoot. Some are small, some involve major street closures and lots of cops and dozens and dozens of trucks. There have been four shoots literally within a block of our apartment in the four months we’ve been here. They are all the same: lots of people standing around doing nothing, a handful of grips and Assistant Directors very busy indeed. Then “action!” … a few seconds later “cut!” … and another couple hours standing around while the next shot is set up. Dull as dirt, yet invariably fascinating. 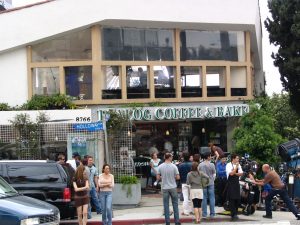 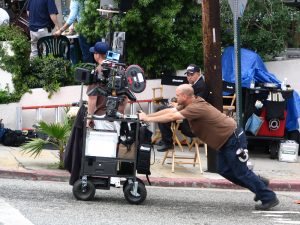 Onward to Sunset Plaza, the heart of the expensive heart, the place where businesses open who really wanted to be on Rodeo Drive but couldn’t find an empty storefront. No prices posted, but you really don’t want to ask. Trust me, unless you’ve got millions, there’s nothing here you can afford to buy except a meal at one of the dozen sidewalk cafes, and even that’s going to hurt you. Everybody sits outside at Sunset Plaza unless it’s actually raining. I used to think it was for the lovely sunshine, but actually it’s to be seen. 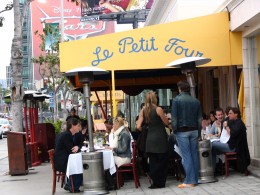 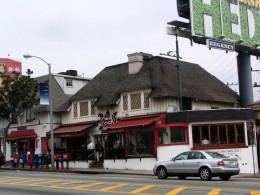 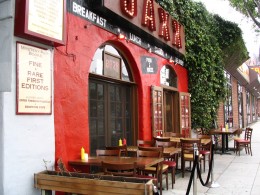 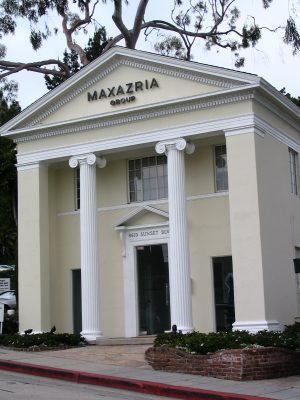 Have to mention one little building I love. It might be the smallest branch of some conservative old bank, or it might be a copy of Tara from a model train set. It’s square and cream-colored and has two columns and announces itself today as “Maxazria Group.” I have no idea what that is, but it used to be the home of Freberg Unlimited. (Or something like that; I’ve been unable to confirm the name.) It was the advertising agency that produced many of the funniest commercials of all time. In fact, Freberg is acknowledged to be the first ad-man to succeed in putting humor in commercials, which were pretty dull and serious when he got started. In case you didn’t know, Stan the Man is one of my personal favorite people. I always used to love walking by the place. It’s so tiny among the behemoths of Sunset Place, precisely as Freberg likes to think of himself: the little guy who you call in when all the juggernauts on Madison Avenue had failed to sell your product. Who else could have boosted prune sales 100% with a few brilliant commercials, including one starring Ray Bradbury?

CRUNCH! Right behind us, incredibly loud for just a fender-bender. But nobody’s hurt. I still can’t figure out just how it happened.

And nearly back to the car, there is the Whisky a Go Go. I’m always surprised to see it’s still there, still looking a lot like it did in the ’60s when it was pretty much at the end of my ramblings on Sunset. I mean, why go further? Nothing to see in Beverly Hills besides a lot of rich people.

But we’re dauntless! We aren’t afraid! Next, we venture into the only town in America so full of rich folks that everyone knows its zip code!