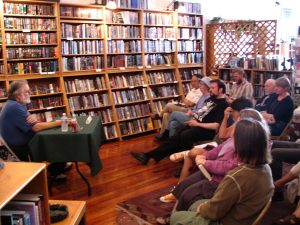 When we pulled into the driveway I noted the mileage for the whole trip: 4645.4. That’s a lot of miles. It was a circular route, of course … and I got to wondering just how long it actually was, if you stretched it out more or less straight.

Mapquest to the rescue! I tried a few routes from opposite corners of America. 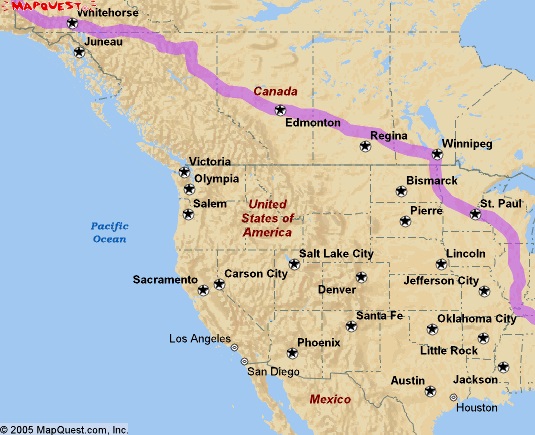 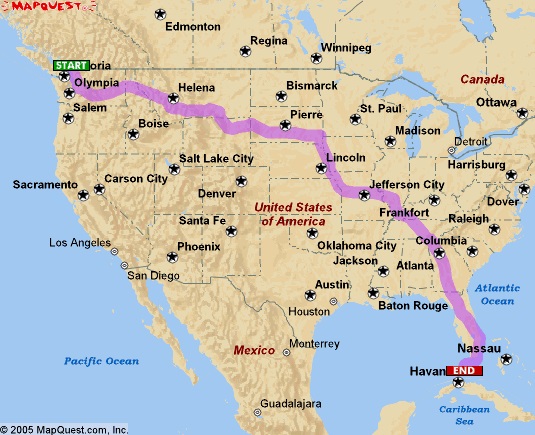 Hmmm. Not even close. We’re going to have to head for Alaska. So …

So that’s a wee bit too far. Turns out that a trip of 4645 miles would have taken us from Key West to the little town of Pelley Crossing, Yukon Territory, Canada. This is just beyond Whitehorse, not far from the Alaska border. Get out your atlas and look at that route. Quite a trip!

This will be a short trip report. Most of what we did during the second part of our Canadian odyssey had to do with family and staying with friends. And even if there had been more of interest to report, I don’t really have the time to do a longer one. I have to get back to work on RED LIGHTNING. Or, as I’m thinking of re-titling it, HARRY POTTER AND THE UNDERPAID SCIENCE FICTION WRITER.

Two weeks of our trip were spent in North Bend, Oregon, looking after Lee’s mother, who is 91 years old and can no longer take care of herself. It wasn’t a lot of work: Helen is only awake about 8 hours each day. 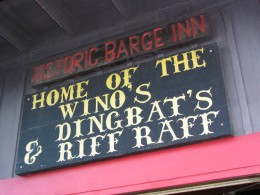 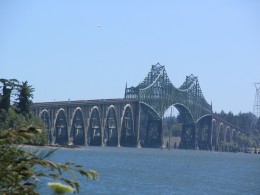 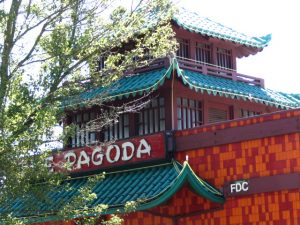 My uncle Don died while we were on the trip, so we took a trip up to Portland. I don’t do funerals, but there was a reception afterwards at the Pagoda, a gaudy red-and-orange Chinese restaurant on Sandy Boulevard that Aunt Mary and Uncle Don loved. Most of my cousins were there with their spouses and it was good to see them all again. The mood was not festive, but not too somber, either. Don had been very ill, but his end came fairly quickly, before he could reach the state my father had to endure for almost two years, and everyone seemed to agree that was a good thing.

Cousin Jim and his wife Janice’s son Derek has started a career in music. When I asked Janice what sort of music he makes there was a pause (and maybe a tired sigh?), and she said “Industrial.” Now, I’d heard of this genre, but can’t say that I’ve actually ever heard any. I explored “genres of music” at Wikipedia and realized that, if you count sub-genres and sub-sub-sub-sub-genres of music, there are at least a thousand or more distinct and interrelated types of music just under the heading of “Rock.” I googled “industrial music,” found a few groups, and listened to things that sounded—and I’m not being sarcastic here, nor am I exaggerating—a bit like a train wreck. I’m not even sure that the term “group” applies to industrial, as it seems to be created mostly on computers, via sampling, sound generators, and techniques I’m probably not even aware of. Derek Stilwell will be issuing his tracks under the name Monkey Farm Frankenstein. Be sure to save some space on your iPods … 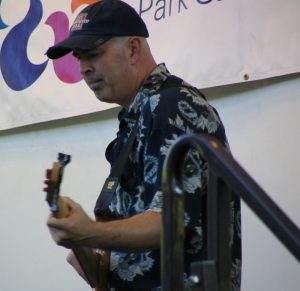 In Eugene we stayed a few days with Lee’s friend, Maggie, in her big old house south of town. There were almost as many deer in the neighborhood as dogs, and there were a lot of dogs. They’d stand around in peoples’ yards in the morning, eating the shrubs, and hardly even look up when cars passed. We managed to connect with my oldest stepson, Maurice, who was gigging with yet another great band, Voodoo Mountain Zydeco, playing terrific bass with two saxes, washboard, drums, and the leader who doubled on guitar and squeezebox as well as vocals. They did the best version of “Iko Iko” I’ve ever heard, and I’ve heard a dozen. Maurice said he may be going to London in August to work with a band from … get this … Zimbabwe. I asked him what he knew about Zimbabwean music, and he said very little except it has a lot of thumb pianos in it, and they seemed to have liked the bass lines he laid down for them. I really want to hear that. 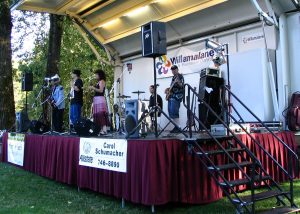 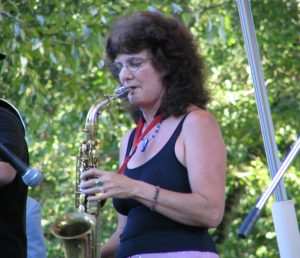 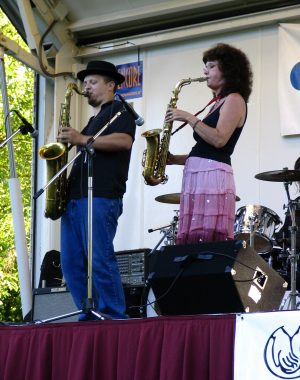 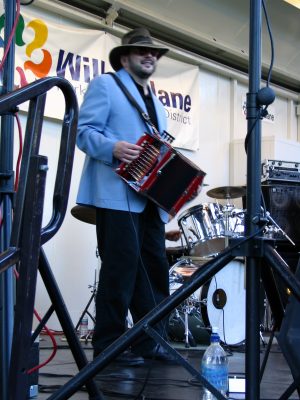 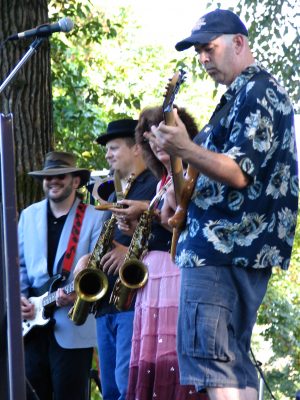 It was 104 when we passed through Redding. Yikes! We just aren’t prepared for weather like that. It seldom reaches 80 here on the beautiful Central Coast of Cahleefornia.

We stayed a night at the house of Charles N. Brown, editor of Locus. It’s good to be seeing him more frequently again, as there was a gap of some years when our paths never crossed. He took us out to a nice Italian restaurant in Oakland. Like so many people my age or older, he’s not as spry as he used to be, but his zest for life and sense of humor seem intact.

Then it was off to Borderlands Books in San Francisco for an afternoon signing. Lee was sick as a dog with a sinus headache and couldn’t even come in. I parked the car in the shade and she curled up in her misery and slept. At five minutes to three there was practically nobody in the store and I figured it was going to be one of those embarrassing events that happen to most authors except Stephen King and JK Rowling, just me and three or four people trying to stretch out the hour. I went out to smoke a final cigarette, and when I came back there were a couple dozen people who had appeared as if by magic. It might even have been more than that; there were people standing in the back. I read a little from MAMMOTH, answered questions, and signed a lot of books. A very good experience. Thanks, Alan! Too bad Ripley, the store Sphynx and resident alien, couldn’t be there, but apparently she was off nursing somebody else who was sick. 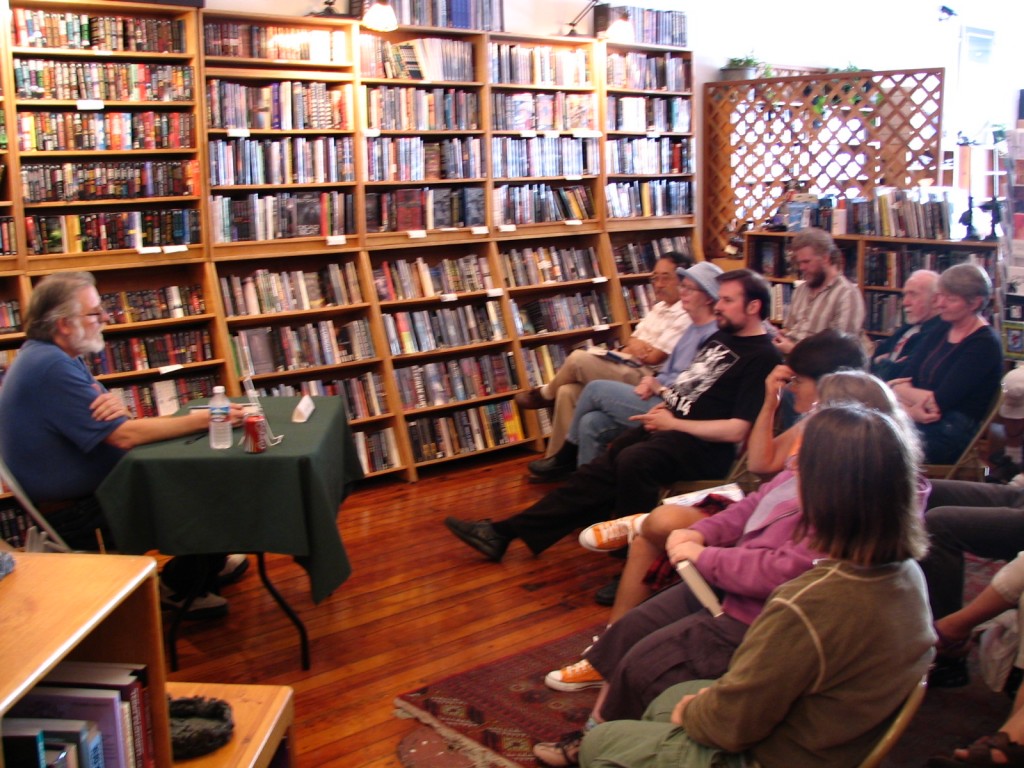 It’s now four days later and we’ve unpacked and sorted through the mountain of mail, 90% of which wanted us to apply for credit cards at 0% interest …

Lee has resumed daily updating of the website, and should have a lot of pictures to post.

Now back to work …