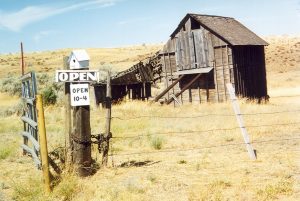 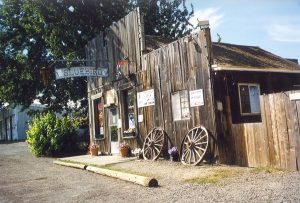 So we pulled into the little town of Bickleton, Washington, in mid-afternoon and decided to go into the one bar in town and ask directions. And who should be in there but the lousy cop who gave me a speeding ticket half an hour before.

That’s right, a speeding ticket. I was buzzing along at a safe, sane 78 mph without another car in sight when he popped up ahead of me, coming over one of the low hills in that part of the country. The Washington fuzz out there drive SUVs. I think this one was a Blazer. We passed each other … and instantly, in my rearview mirror, I saw him turning around. I slowed to 55. I was cussing and pounding on the wheel. Lee said maybe he wasn’t after us. He pulled in close behind me … and for the next three or four miles, nothing happened. I told Lee he was just waiting for a place where I could pull over; this was a 2-lane road with no shoulders to speak of. And sure enough, the first time I saw a gravel road off to the right, he lit me up.

This guy didn’t look any more like a State Cop than Michael Moriarty from LAW & ORDER. I showed my license, and had the usual trouble finding the registration and proof of insurance. I always put that stuff where it will SURELY be easy to find … and can never locate it when asked.

He asked if I knew what the speed limit was on this road, and I said probably 55. No, he said, it’s 50. As if anything but a tractor or a herd of goats has EVER gone as slow as 50 on this road. He said he clocked me at 70 or so, and could write me up for EXCESSIVE speed if he wanted to, which would cost me about $200 and be a permanent part of my driving record. But because he was such a nice guy, he’d only write it for 60 in a 50 mile zone. Only $60. I tried not to grind my teeth. They make you feel like you’re back in the third grade, you know? Permanent record, my ass. 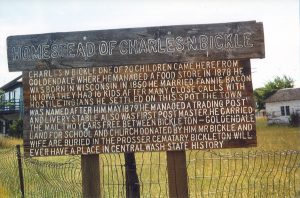 Bickleton was about thirty miles beyond a sign I had passed that read NO GAS FOR 65 MILES. I hadn’t expected to see that in all this farmland, but I guess all the towns were too small to support a gas station. In the bar, besides the landlord and the storm trooper, was a vacationer, the Captain of the huge Land Yacht that was parked outside. He was highly embarrassed. He didn’t think he had enough gas to go either forward or back to the last station he passed. His bus probably used a gallon of gas just backing out of the driveway. The fascist cop and the bartender were debating where they should send him. All these farmers around here HAD gas, and plenty of it, in their own tanks. None of these fields were tilled by horses, after all. I wondered what this guy would get charged for a tankful of it. 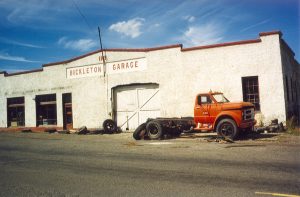 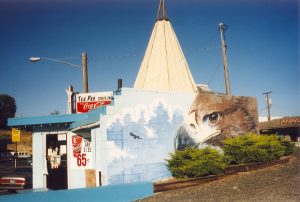 (We learned later that Bickleton, what there was of it, had mostly burned down a little over a year ago in an out-of-control brush and forest fire. They had rebuilt most of it. Why they bothered was anybody’s guess.)

Lee had found a brochure somewhere listing the most interesting museums in South Central Washington… not a place I would have thought was teeming with museums, but I was wrong. The brochure listed 24 of them. Of course, none of them were causing the head honcho of the Smithsonian to lose any sleep …

There was Maryhill, of course. But we’d seen it, and it was back behind us. How about the Roslyn Historical Museum? No? Well, there’s the Yakima Valley Museum, but it’s quite a ways ahead. Think about that one. Hmmmm. Washington’s Fruit Palace. Rail & Steam Museum. Yakima Indian Nation Museum. Clymer Museum and Gallery. Whoop-n-Holler Ranch Museum. Presby Mansion Museum. Olmstead Place Heritage Site….

If you know anything at all about Lee and me, you will know there is no way in hell we’re getting out of this county without visiting the Whoop-n-Holler Ranch.

The bartender and the jackbooted nazi thug in a cop uniform said it was about twelve miles south, and told us which road to turn on. That road went due south, and in about a mile turned ninety degrees to due east. Another mile and another turn due south. ALL the roads out here were north/south or east/west, like you see from a plane over Kansas. I hate those kinds of roads. You no sooner build up a little speed than you have to hit the brakes again for a ninety degree turn.

Whoop-n-Holler was like a lot of places you see in farm country: a collection of buildings and a lot of junk cars and rusting farm equipment lying more or less at random around the property. But there were about 50 cars, and they were INTERESTING cars. From the ‘30s and ‘40s, a few from the ‘50s. 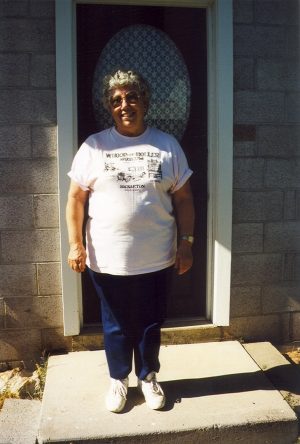 Shortly after we parked, we were greeted by Ada Whitmore, who ran the place. A family drove in behind us, and Ada took us all on the tour. First was a one-room schoolhouse, then a big barn full of old cars. There were several Model-T’s and two Edsels and some Hudsons from the ‘40s. These vehicles were not in pristine condition, but they certainly weren’t wrecks, either. Most needed a new paint job, maybe some upholstery work. Who knows about the engines.

Every one of these cars seemed to have played a part in the Whitmore family saga, which Ada told us about in great detail. The Whitmore family arrived in that part of Washington on the heels of Lewis and Clark. (I suspect they picked up some of the expedition’s garbage … and KEPT it for the museum.) They’d been here ever since. The ranch was on Whitmore Road and we crossed over Whitmore Creek. I wouldn’t have been surprised to learn we were in Whitmore County, but we weren’t. Klickitat County. 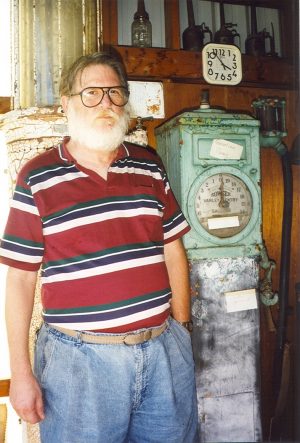 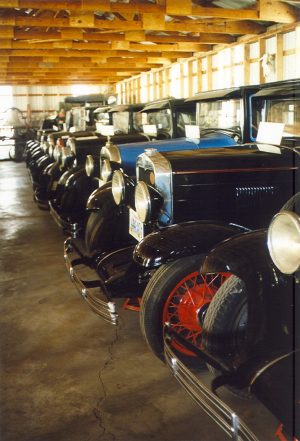 The other building she showed us was full of antiques and oddities. I remember an electric lunch bucket. It had a plug in the side to warm up your soup. Also, outside the Odditorium was a shepherd’s wagon. I recognized it from pictures in the National Geographic, in an article about Basque shepherds in Idaho. It is sort of a proto-RV, looks like a Quonset hut on wheels. Very neat and cozy inside, with a bunk and a sink and water jug and wood stove. I thought about becoming a shepherd, pulling that wagon behind my jeep, with my trusty Shetland Sheepdog by my side. (Cirocco was still alive when we took this trip.)

The Whitmores are also responsible for the birdhouses you see nailed to every hundredth fencepost in Klickitat County. They are simple white boxes with blue roofs, and they are for the use of a species of bluebird that was getting pretty rare forty years ago. They put up all these birdhouses, and now the bluebirds are apparently all right. Girl Scouts and other organizations hose them all out once a year. We bought a little glass bluebird to contribute to the cause of bluebird conservation. I just hope it wasn’t those nasty, noisy blue JAYS they were talking about. 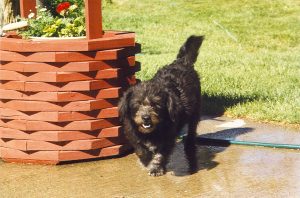 There were two Whitmore dogs, as well. No particular breed, small to middling in size, and no doubt the worst guard dogs in the state. They were both so used to strangers traipsing through the Whoop-n-Holler buildings and grounds that they greeted anyone who stepped out of a car like old friends. I scratched the little black one behind the ears and made a buddy for life. He was around my ankles for the rest of the tour, looking up adoringly every time I glanced down.

Before Bickleton, the Obersturmbannfuhrer State Cop, and the Whoop-n-Holler, we had made our way cautiously up the Klickitat River Gorge. It’s not as tall as the Columbia Gorge, and a lot narrower, with an S-turn every hundred feet or so. We pulled over at several places so we could see the river down below. At one stop we saw three of those rickety platforms Indians use when they’re netting salmon. Jesus. Rickety is the operative word here. Just getting down to them looked tough, and as for standing on one and swinging a big fishnet … no thanks.

And at some point we pulled into the little town of Goldendale, which I remember fondly from a night, quite some years ago now, when I drove all night long with a few friends, looking for the Stonehenge replica up there, because we intended to see the total eclipse of the sun like Druids. There was an all-night diner in Goldendale then—I looked for it this time through but didn’t see any place that looked familiar. We all piled into a booth that night and tried to stay awake for the sunrise … which seemed unlikely, as it had rained heavily all the way from Eugene. I think I had a cup of coffee, that’s how drowsy I was. I NEVER drink coffee.

—and at the last possible hour the clouds blew away and we saw a sun whose light was pale as skim milk, and right on time I saw the vast shadow SWOOPING over the wheat fields and over us and a thousand people gasped … and I sort of wanted to beat on a gong and set off some firecrackers to drive away the dragon eating the sun. No kidding, it touched something deep and fearful inside of me, and it was no longer so easy to laugh at the primitives who saw a total eclipse and thought it was all over now, baby blue.

(If you’ve seen a partial eclipse, even 90 or 95%, forget about it. You don’t even have a CLUE what it’s like. As some wise person said, it’s the difference between night and day.)

Lacking the 24-hour diner of fond memory, we ate lunch at the Dine & Dash Cafe on Main Street. 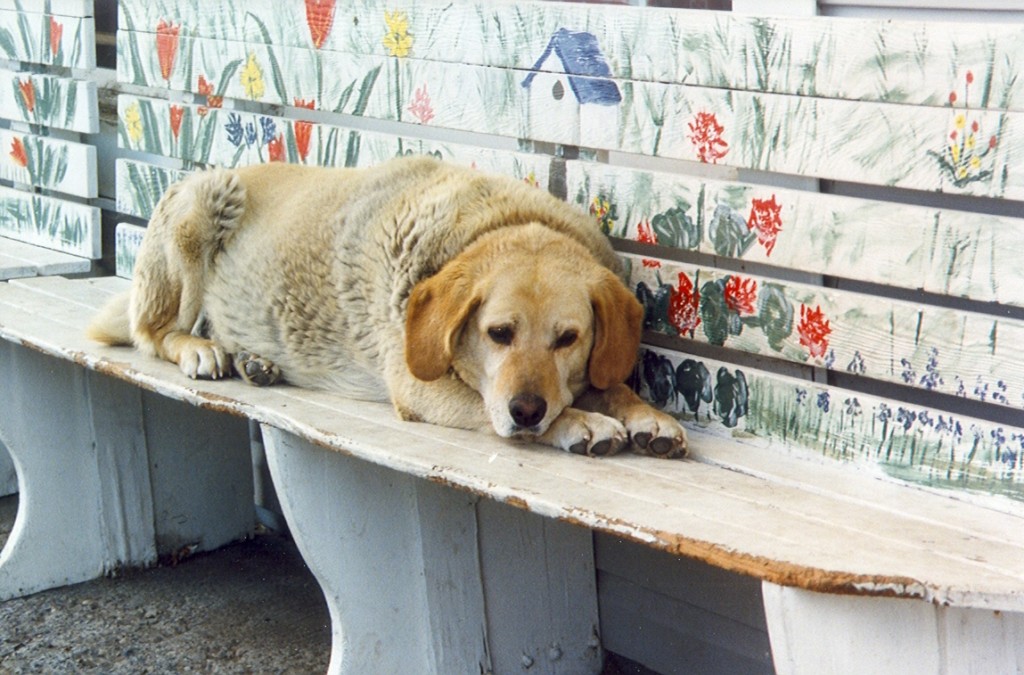