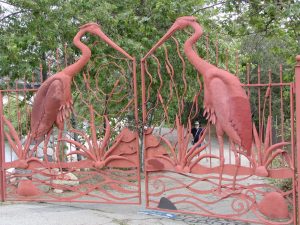 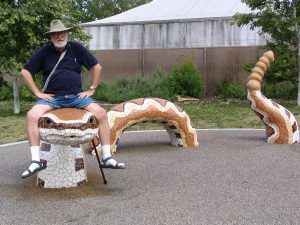 Another surprise: dotted along the Los Angeles River from the I-5 north are a lot of little pocket parks. These can range from just a little side path into the trees with a metal bench to sit on, up to a rather nice little playground with a huge, fanciful snake. (Signs warn you that this is rattlesnake country; we’re keeping our eyes peeled.) Many of the parks have nature-guide plaques (mostly too defaced to read) and fanciful metal gates and fences. Lee took a lot of pictures of this stuff.

Venturing out of Frogtown for the first time, we strolled the east bank of the river through a neighborhood called Atwater Park. There’s nothing distinguished about it, though the homes go for between $500,000 and one million dollars. I remember remarking recently to Lee that a million dollars used to be serious money, but I guess it’s not anymore if these modest little dwellings can cost that much. I don’t know who can afford to buy them, but I guess a lot of people are sitting on a lot of money if they ever decide to sell. We went down along the river, and back through the streets. 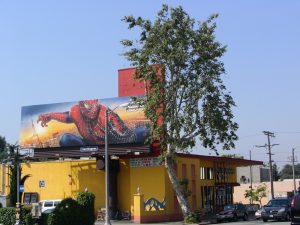 That brings us to Los Feliz. This is the street we take when we’re going to Glendale or Pasadena and points east. It begins where Western ends, goes a block north and then curves east and parallels the lower part of Griffith Park, dividing homes on the south that are merely expensive from those in the hills to the north that are scandalously expensive. The street crosses the river and somewhere not far from there is the Glendale city limits. You often don’t know when you’ve crossed one of those lines. We strolled along Los Feliz for a while, looking at the businesses, and found a place called Whole Food (not the super-spendy chain) that I’d assumed was a health food market. Went in, saw it was a fantastic bakery and deli with a lot of ethnic foods. They make a pretty mean piroshki. I remember I used to buy piroshki at 3/dollar at the Russian bakery on Haight Street, and that would be lunch. These were a dollar a pop and are bigger, which ain’t bad these days. There is also an Indian vegetarian market and restaurant which we will check out one of these days.

The west side of the river here is a bike path, clean and ordered and not very interesting. We have found that our adventures are like that. You set out to walk Sunset, for instance, and you have to take the good and interesting (Echo Park) with the bad and dull (Beverly Hills, believe it or not). But when we have the choice, we’ll walk on the wild side, so to speak, so we started going up on the east. 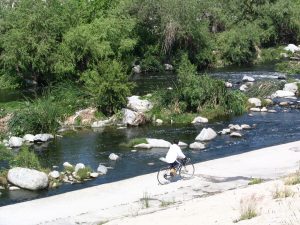 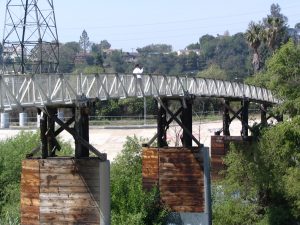 Right at the corner of Los Feliz and the river is a par three, nine-hole golf course. Not fancy at all, nothing like the two regular courses just across the river in the park. Just beyond that is horses. Believe it or not, about half a mile of stables, riding rings, all that horsey stuff I know nothing about. A dirt bridle path parallels the pavement walking strip. I had no idea there were so many horses in Los Angeles.

We soon got into one of those difficult areas where the fence just went on and on and on, unbroken. On the other side was a truck and equipment park for the power company or the parks department or something like that, acres and acres of big yellow trucks. The map said it was Atwater Park. Nothing parklike about it. Northward, northward, ever onward, and I was about to give up and turn back when we finally reached a short side spur of I-5 and were able to make our way to the western terminus of Colorado Boulevard, the main street of the San Gabriel Valley and the route of the Tournament of Roses Parade, many miles to the east in Pasadena. Turning south along San Fernando Road West (which I didn’t even know was there) took us past a vast warehouse for the Ralph’s supermarket chain. Trucks coming and going. Not a great neighborhood. But soon we entered a neighborhood called Chevy Chase Park, and it was nice. 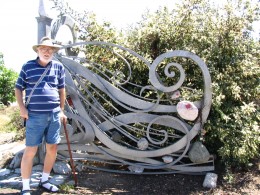 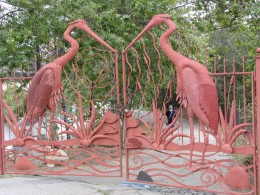 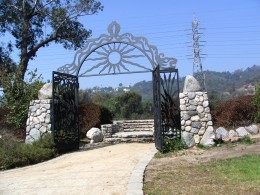 Across the river were the brown hills of Griffith Park, about 90% of which is inaccessible to all but the most determined hikers. It’s a beautiful view, and it’s full of wildlife. One day recently we saw four or five deer grazing on the links of the Harding golf course over there, supremely indifferent to the idiots knocking the little white balls around. Sad to say, it’s a tinderbox this year, even worse than most years since we’ve had no rain to speak off all winter. There’s already been a big fire over by Universal City. We could see the flames from our apartment, and the helicopters coming and going dumping fire retardant. It promises to be a bad summer for the deer. 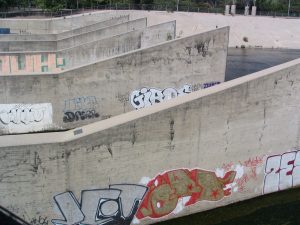 The next day we had to devote to reconnoitering. First we drove back to where we’d exited the river the previous time and tried to get back on the path. Couldn’t be done, not without risking our necks, anyway. We could stand on the other side of the freeway and see the entrance to the path, open and inviting … and across six lanes of slashing freeway traffic. Absolutely no way to get there.

We drove along the side streets, looking for an opening. No luck. We finally dead-ended at the 134, the Ventura Freeway. Very hefty fences, signs warning us the area was under 24-hour video surveillance. Armed response! Osama bin Laden had obviously been spotted in the area recently. So here was a one-mile stretch of river that had a path with only one entrance, and no way to reach it. This is called “city planning” in Los Angeles. Often, the pedestrian is left out of the mix, not to mention the bicyclist. 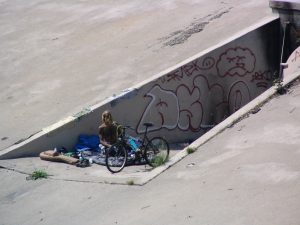 So. Back to Los Feliz, across the river, into the park. North to the Gene Autry Western Heritage Museum, which I’d seen from across the river on our previous walk. The route to the river was not immediately obvious, so on we went along one of the many bridle paths that lace Griffith, along Zoo Drive to Riverside Drive (not the same one that goes south from the park, it seems, but the Valley Riverside Drive) and across the river once more into Glendale again. Between the Autry and the bridge is where the Los Angeles River makes its most dramatic bend, from flowing east out of the Valley to south toward its mouth at Long Beach. There was a small park over there and access to the river … for about two hundred yards. Then it dead-ended against a huge power plant. No way to continue on that side.

Oh, well, we knew we couldn’t follow the river all the way, so we resolved to walk on the horse trails from the Autry to the bridge, and back again. We also made some other interesting discoveries about the area north of the river there … but that will be described in the next installment. See you then!