Hamlet in the Cemetery 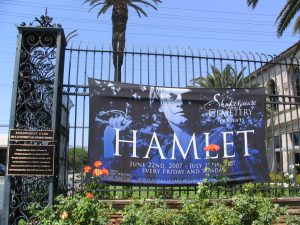 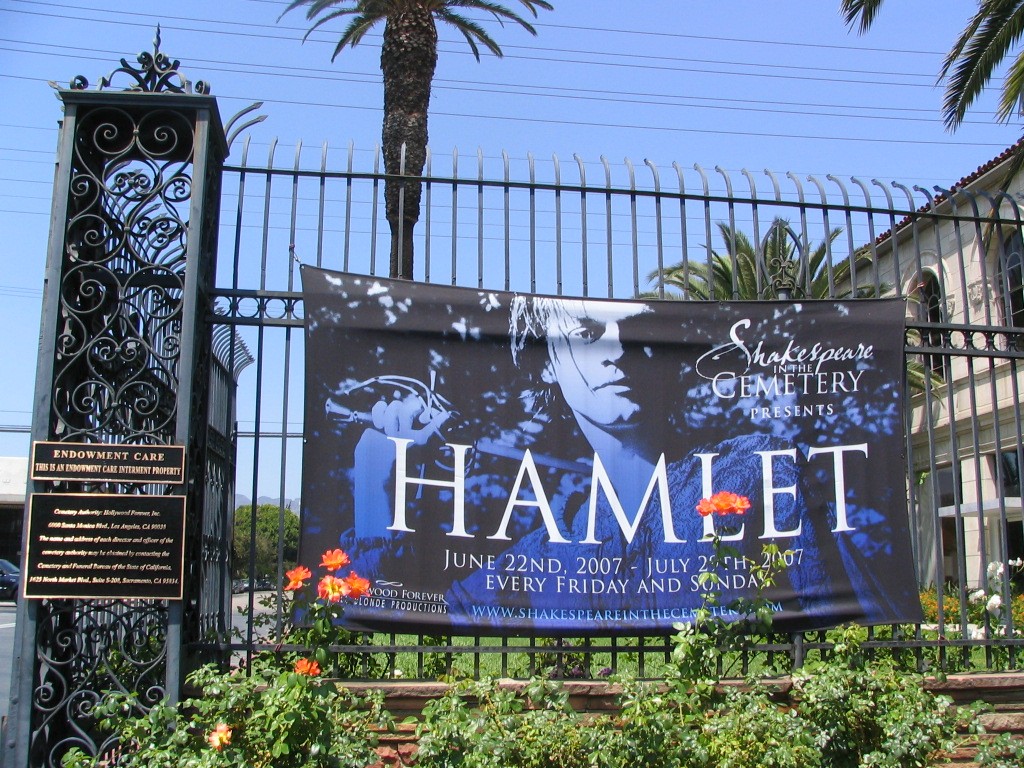 A few miles from our apartment is the coolest cemetery in America, maybe in the whole world: Hollywood Forever. They have an annual Halloween party at dusk, when they show scary movies on the side of a mausoleum. People come in costume. We haven’t been to that yet (though we’re planning to), but this summer they’ve started something new: Shakespeare in the Cemetery. The first production was Hamlet, so we decided to go. 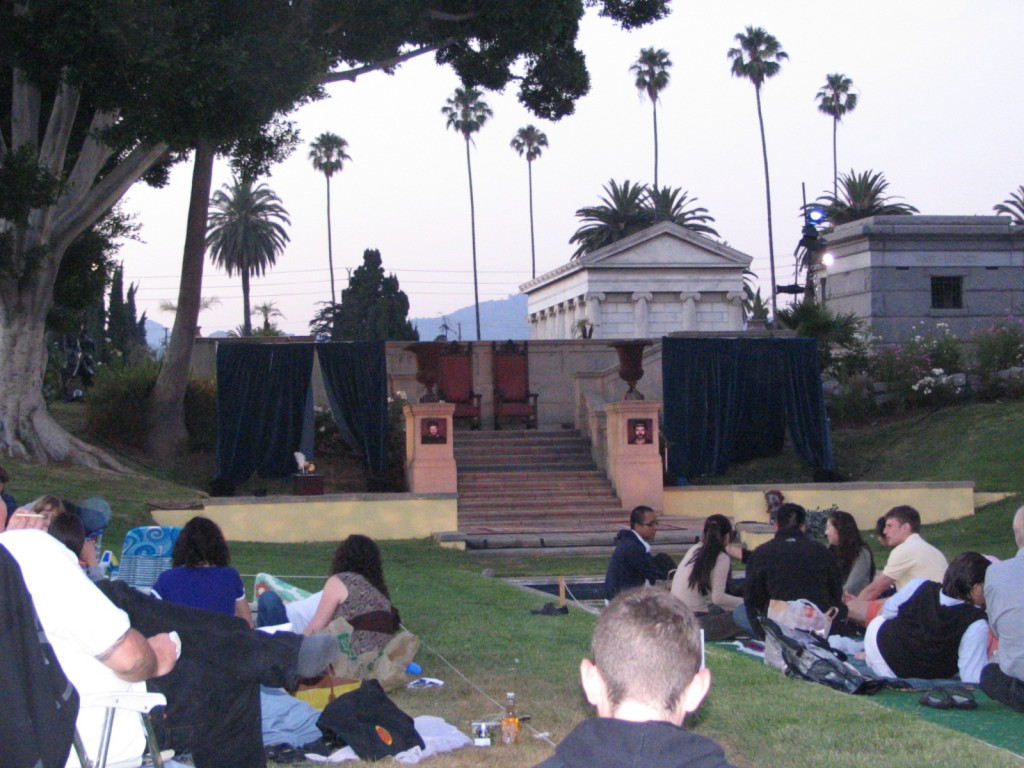 You can’t walk far in Hollywood Forever without tripping over a famous person’s grave. Rudolph Valentino is here, and large crowds celebrate his birthday every year. There’s Fay Wray, Norma Talmadge, Bugsy Siegel, Charlie Chaplin’s mother and son, Joan Hackett (epitaph: Go Away – I’m Sleeping), Mel Blanc (That’s All, Folks!), Carl “Alfalfa” Switzer and Darla Hood, Peter Lorre, Marion Davies, Tyrone Power, Jayne Mansfield, C.B. De Mille, John Huston, Johnny Ramone (marked by a statue playing a guitar), Nelson Eddy, among many more lesser lights. George Harrison was cremated here. But the biggest monument is where Douglas Fairbanks, both Sr. and Jr., lie in eternal rest. It’s a long lawn with a reflecting pool and monuments at each end. For this play they covered the pool and people could sit there or on the grass. We were encouraged to bring a picnic lunch. The gates opened at seven, play to begin at 8:30. (There are no actual graves in this area, so we weren’t sitting on tombstones.) I estimated the crowd at about 500, though about a quarter of them left at intermission, probably because of cold and discomfort. 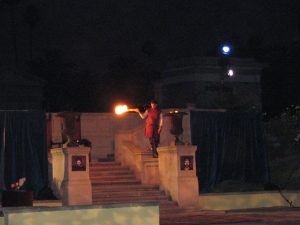 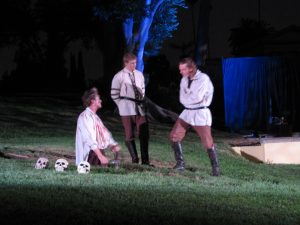 It was quite a good production, marred only by the occasional helicopter flying overhead. There is more acting talent here than anywhere in the world, and more actors looking for work, so the cast was great. There are also many resident ducks, very aggressive geese, peacocks, and black and white swans wandering the grounds. Along about Act Three a family of ducks waddled in among us and sat down to enjoy the show. I wouldn’t have minded—they were better-behaved than many moviegoers I’ve seen—except they kept getting up to find better seats. At least their cell phones didn’t ring. 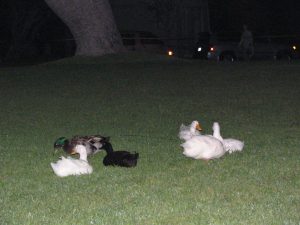 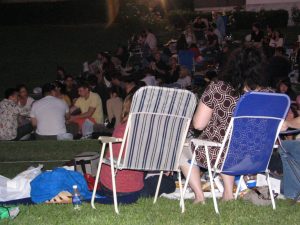 I had to pity poor Ophelia, though. She had to throw herself face-first into a part of the pool they’d left uncovered, and even on a Los Angeles night I’ll bet that water was cold. Then she had to lie there for about five minutes, playing dead, until Horatio arrived to pull her out. And, of course, doing Hamlet in the cemetery, you can dig a real grave! They lowered Ophelia into it and she had to spend all of Act Five about four feet underground since it wouldn’t do for her to pop out in full view a moment later. Not a part for the faint of heart! 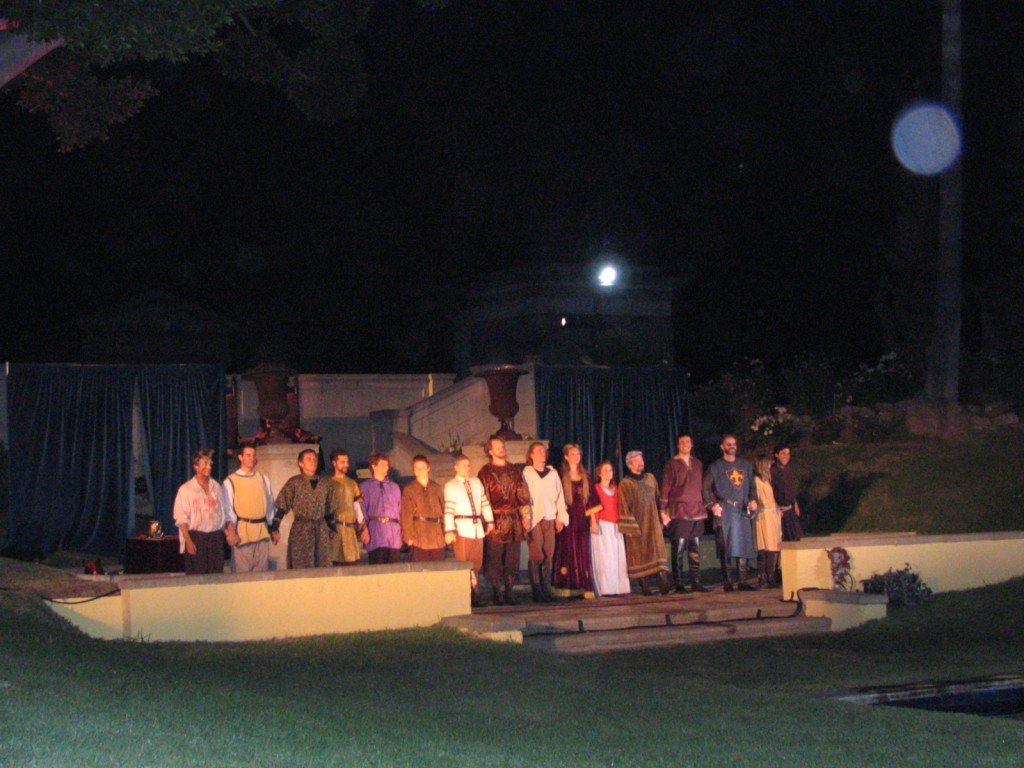 We thoroughly enjoyed ourselves. Next production: A Midsummer Night’s Dream, starting this August.

1. Bring some of those low beach chairs. That ground gets hard after three hours!

2. Take along an extra blanket for Lee.