Suzanne Pleshette Gets a STAR 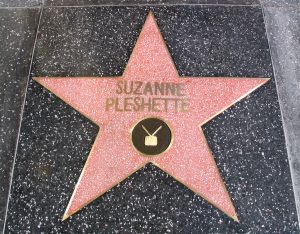 I don’t sit around and wait for great parts. I’m an actress, and I love being one, and I’ll probably be doing it till I’m 72, standing around the back lot doing “Gunsmoke” (1955). ~Suzanne Pleshette

The third Hollywood Boulevard Star Ceremony of 2008 was a sad one, like the first, which was posthumous, for Elizabeth Montgomery. (The second was for someone called Lucho Gatica, a Chilean singer in the “Bolero” style—whatever that is—who is apparently very popular with Spanish audiences, but I’m afraid I’d never heard of him.) Suzanne Pleshette died on January 19th, just 12 days ago. Today would have been her 71st birthday.

“The Bob Newhart Show” was one of many no-doubt fine and funny sitcoms I never watched, simply because I’m not much of a sitcom fan. So I really only know Suzanne Pleshette from Hitchcock’s The Birds, where she was killed in a very gruesome manner. But she must have had a great sense of humor, as she requested a spot on the sidewalk in front of Frederick’s of Hollywood, not exactly prime real estate for this sort of thing. I loved it. It reminds me that, glitzy Hollywood-Highland Center and Grauman’s aside, most of Hollywood Boulevard is still pretty sleazy, and Frederick’s is the class act among the dozens of Whores R Us lingerie shops along the street, if you can believe it.

I don’t know the co-star, Marcia Wallace, either, and about all I know about her now, having seen her, is that she apparently does her hair in the morning by dipping her head into a bucket of rusty water and then sticking her finger into an electrical socket. Oh, and she had a “nervous breakdown.” I know this because she mentioned it, and said that Suzanne Pleshette sent her a fruitcake. Great story!

Then Arte “Very Interesting!” Johnson spoke for a while, and had a lot of good stories to tell. He was one of those “Laugh-in” stars who only had the one schtick, and had a sporadic career afterward. 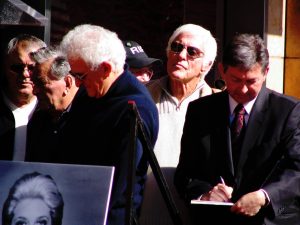 Dick Van Dyke was there, with startling white hair, but he didn’t speak. There was, in fact, a long list of celebrities who had their own stars on the Walk of Fame, but I didn’t recognize any of them, as they were mostly much older than I would have remembered them. Also, George Schlatter, co-producer of “Laugh-in,” who I’d never have recognized, anyway. Oh, and I recognized Rip Taylor. It helped that he was wearing a hat that said “Rip” on it. He’s one of those people like Zsa-Zsa, who I’m never quite sure why they’re famous. One of the corner people on “Hollywood Squares.” There was a guy who looked a lot like Peter Falk, but his name was never mentioned, so it must not have been him.

Then it was time for Bob Newhart and his comb-over. He had a hell of a time. First it was a huge truck pulling up and idling behind him. Then another truck. An ambulance went by. Then another … and this one pulled in right on the street beside us and medics got out, then a fire truck, and a fire chief’s car. (I never did find out what happened; Lee heard that someone in the small crowd had fainted.) Bob had a great time with all these interruptions. He pretended he was directing traffic, then silently mouthed his words as if the sound system had gone out, and even tried signing his speech. 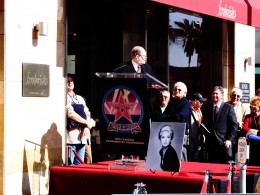 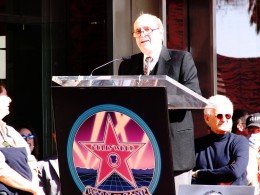 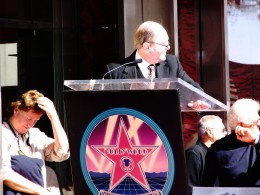 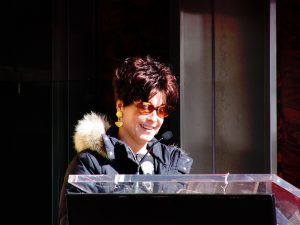 Finally it was time for Tina Sinatra to accept the star on Pleshette’s behalf. Her sister Nancy was there, too. Now we have pictures of the entire set of Sinatra spawn!

Tina: the one who wisely decided not be become a singer, and the youngest and best-looking of the lot.

Perpetually scowling Frank Jr. … and hey, you’d scowl, too, if your life had been devoted to following your father’s act.

And Nancy, whose face is looking like she’s been mugged by a dozen plastic surgeons wielding collagen and botox needles.

I have to say it all seemed heartfelt. These people really liked Suzanne, and were so sorry that she just missed being able to be there herself. 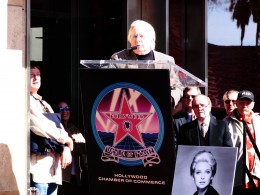 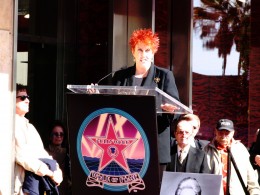 Just a block away the Boulevard was once more closed off at Highland (sometimes I think it spends more time closed off than open), and parked in the middle of the street were dozens and dozens of satellite trucks. I hadn’t known it, but the last two survivors not yet voted off the Democratic island (if you don’t count joke candidate Mike Gravel from Alaska, who was never on the friggin’ island), Hillary and Barack, were going to debate in a few hours at the Kodak Theater. I’d say that Obama supporters had the edge in the zoo that was rapidly developing. There were huge signs, and street performers singing his praises. Business as usual on good ol’ Hollywood Boulevard, in our home town. We just love it! 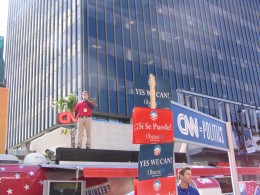 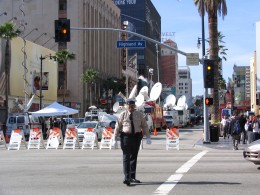 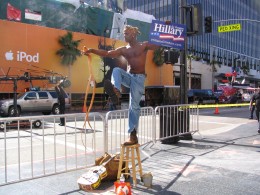 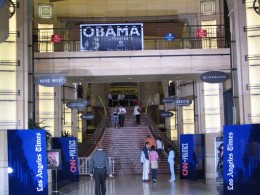 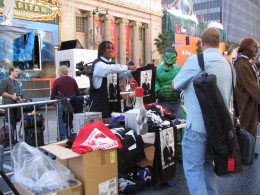