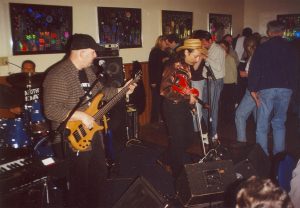 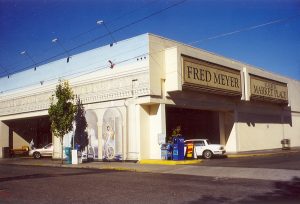 Our life out here is pretty simple. We get up early in the morning—quite a radical change for both of us—and work until about noon. Most days we drive into town for one reason or another. And at some point in the afternoon we re-enact the Bataan Death March. (Or, as Lee prefers to put it, “Take a nice little aerobic walk.”) This walk is usually about a mile out and a mile back. Not a terrible distance, but because of diabetic peripheral neuropathy my feet begin to burn after about the first quarter mile and get worse with every step after that. The aerobic walk is necessary, no question. I’ve lost about 15 pounds in three months, and hope to lose a lot more than that. But it’s hard.

Lately, we’ve taken to re-staging Hillary’s final assault on Everest as an alternative. (Or, as Lee prefers it, “Doing the walk I used to do from Fred Meyer to my apartment carrying five bags of groceries.”) Plus another three uphill blocks to the entrance to Washington Park.

We begin, as I said, parking on the street by Fred Meyer. The journey to the first Base Camp isn’t too bad, a block up Burnside and then half a block over on 21st. There, at the base of the alley, we meet our Sherpa bearers. A hardy lot, even they seem subdued at the task ahead of us. But we forge on, pitons and ropes deployed expertly on the forbidding slopes. The air is very thin by the time we reach Base Camp Two, the blue mailbox at the corner of Vista and Park. We take a few moments to acclimate our lungs to the lack of oxygen.

The Sherpas are having no more of it. “One cannot go further without an automobile,” they warn us, voices quavering. “To proceed is madness! Madness, effendi!” Or bwana, or sahib, or whatever Sherpas call crazy white adventurers.

On we go, ever upward, past the rusted-out hulks of the BMWs, Mercedes-Benzes, and Infinitis abandoned by previous parties. Past Ashmore. Past Cactus Street, and finally past Douglas Place, where a forlorn family of yeti crouches in the snowdrifts and watches us fearfully. 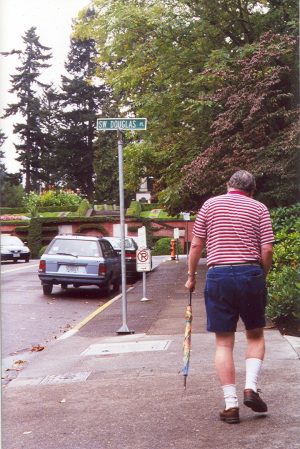 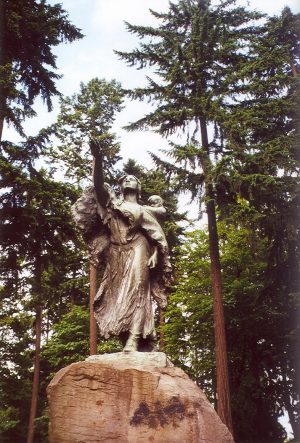 And, at last … the summit. The road turns in a circle up there, and around the bend is a statue of a woman striding confidently ahead. I never made it to the base to find out who she was. I was saddened to learn from Lee that she is Sacajawea. I had imagined she could be Saint Scholls, patron of corns, calluses, bunions, and bleeding blisters.

Nine P.M., still some light in the sky at the end of an overcast day, and I hear what sounds like a modern armored division coming down Reeder Road, just on the other side of the wall of trees and brush that hides us from the street. But it’s not tanks, it’s the harvester brigade.

The Reeders own the field across the road from the RV Park. I’m no good at these things, but if you asked me I’d hazard that it’s about ten acres. About a month ago, maybe two months ago, they planted peas in that field. These aren’t peas that grow on strings, like in your garden. They make a dense mass about a foot deep. A week ago we noticed the plants were full of pods, picked some, and they looked ready to us. Lee ate a bunch of them, raw. (In fact, when we bought a pound of them from a market out here, Lee ate them all before we even got home. Lee likes raw peas.) We were thinking of asking the Reeders if we could pick a bushel or a peck. We had visions of sitting around on the back porch and just shucking the heck out of those suckers, like I did with my Grandmother and Aunt Cokie when I was younger. If we’d had a back porch, that is.

Too late. When I got out to the highway I saw the harvesters, six of them, turn down the dirt road to the pea field. With them were three flatbed trucks with big Fiberglas containers, three pickup trucks, a gasoline tanker, a porta-potty truck, and an assortment of other heavy duty vehicles. These harvesters are about the size of a city bus. The light was swiftly fading, but these guys paid no attention. They switched on their headlights and set up light towers carried in on trailers, and they kept chowing down.

They attacked that field like Rommel’s Agricultural Panzer Division bent on a spot of nocturnal cattle mutilation. But very slooooooowly. FMC Pea Harvester, it says on the side. That’s all these giants do, just harvest peas. I don’t know how they do it, but all they leave behind is a trail of chopped-up plants. When they’re full, a truck backs up to them and the harvesters dump a ton of fresh peas in the back. I checked back at 2 A.M., and they were still at it. I can hear them now. It looks real spooky. I try to visualize what it must look like to a field mouse, this solid wall of bright lights and growling machinery advancing at a relentless one mile per hour. Jeez.

I’d always heard that farmers kept rather conservative hours. You know, up at the crack of dawn to bother the cows and startle the chickens, then out in the fields to squat and pick up a fistful of rich, brown loam, squint thoughtfully at it, and spit. Seems they’re not like that at all. I’ll tell you, those infamous “crop circles” sure don’t seem all that mysterious to me anymore. There’s no telling WHAT those farmers might be up to in the middle of the night …

LATER: They’ve been running the harvesters 24 hours a day for about three weeks now, and they are currently working on the last pea field we know of. Where next? Maybe there are other fields which ripen a bit later than these on Sauvie … but not too long from now I assume the giant pea harvesters will be driven into a big barn with hundreds of others, then turned off to wait about nine or ten months until the next crop of peas is ready. I’m amazed. Those monsters look very expensive, and I can’t imagine what else they might be used for. And yet peas are cheap. 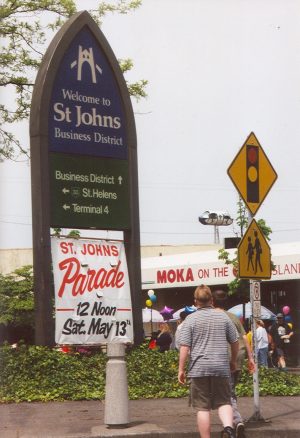 We went to the Children’s Parade this year, so now we’ve seen all four Rose Festival parades at one time or another. This was our first time for this one. They say there are 10,000 children in it, and it couldn’t be far wrong. You don’t realize how many cub scout and camp fire troops, dance and tae-kwon-do schools, soccer and softball teams and literally hundreds of other community organizations there are until they walk in front of you in a parade that takes almost two hours to go by.

They cut off the band eligibility at the ninth grade, so only middle schools (what we used to call Junior High in Texas) need apply. There were about twenty bands. Three of them could play okay, and two of those even had decent uniforms … but none of them could have competed with Willie LaGrone’s C.O. Wilson Junior High School Fightin’ Bullpups Marching Band. While about half these bands were goofing and wasting everybody’s time with that ever-popular unintelligible piece of musical crap “Louie, Louie,” WE were cutting our teeth on Sousa, King, and Alford. (To be fair, one of these bands did play “Colonel Bogey.”) And if we had marched as raggedly as these kids, Mr. LaGrone would have broken off all our spit valves. And soft? These days there’s almost as many “assistants” marching along, squeeze bottles poised to squirt water into parched mouths, as there are band members. Why, in MY day, we stood out in the 98 degree, 98 percent humidity of the Port Arthur “Cav-Oil-Cade Parade” staging area for at least an hour before we even STARTED, wearing uniforms that would have kept us warm through a Siberian winter. And water? Hell, we didn’t have any water! We didn’t even step off until at least three people had passed out! And we LIKED it! We didn’t complain as the heavy shakos on our heads contracted two hat sizes in the miserable heat! I declare, the world is going straight to hell! Why, the kids these days … grumble, grumble, grumble. 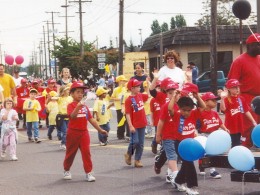 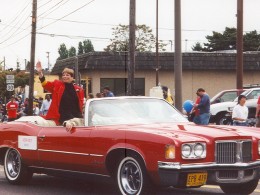 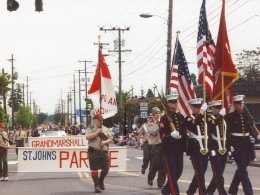 Late one Saturday evening we went out to a club called Candlelight, down at the southern end of downtown Portland. My step-son Mo was playing a gig there with Etouffee. We’d heard them before and liked them a lot. This time I thought they were even better. They play “Louisiana swamp country rock ‘n roll,” and when they started out, that’s exactly what they sounded like. It’s music that makes you want to pole your pirogue WAY down de bayou, eat a lot of jambalaya and crawfish pie and file gumbo at a fais do-do, then kick a great BIG pile of alligator shit. About all they’re missing is a Cajun accordion, and the more I think about it, a squeezebox might make them sound TOO down home. They remind me a bit of Beausoleil, a little of Buckwheat Zydeco (except I think they’re better than either of them), and even some licks that reminded me of Creedence.

The leader of the band is Kelly Thibodeaux, who saws away at his fiddles like a crazy man. He has two instruments: a red one and a white one. And it’s a damn good thing that bow isn’t any sharper than it is, or he’d cut right through the fiddle and his arm, too. 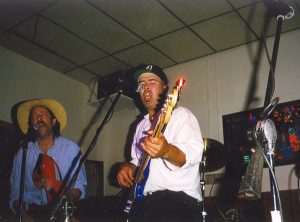 After a few numbers they moved into more hard-driving stuff. Mo started out the night with what I was sure was a 5-string bass (Lee thought it was 6-string; either way, it wasn’t your standard electric bass) then played on a 4-string, and when they shifted to blues he went to the keyboards and sang. Hell, Mo can play most anything, he’s a real professional. I hadn’t heard him sing blues before, nor had I seen him work out on the keyboard. And he did an extended solo on the bass that really had the crowd going. I tell you, he was really wailing. Best singing and keyboard playing I’d heard in a long time.