Donald Trump Gets a STAR 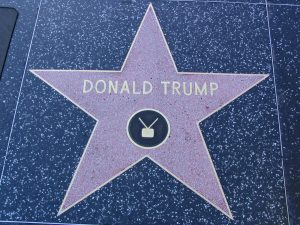 Location: in front of the Hollywood & Highland center.

It really has been a special moment in my life. ~Donald Trump

I doubt we’d have bothered with The Donald, except you never know who else is going to show up. Neither Lee nor I are fans of him or his show. But we did go, and got to see Jay Leno and Larry King. And here’s a good place to comment on how honorees are chosen, which we’d been wondering about. It’s money. Used to be $15,000, now it’s $25,000. Oh, you have to be known to a sufficient number of a small panel of people, but basically you write a check for $25 big ones, and promise to be there for the ceremony, and you are DOWN, dude!

The rest is not so well known. Why is it that Dick Wolf, Stiller and Meara, and Vanna White get a star in front of a liquor store or a parking structure, and Bruce Willis gets one in front of Grauman’s, and The Donald gets his front and center at the Hollywood/Highland? It could be a matter of space. Let’s face it, more people show up for Bruce Willis than for Dick (who?) Wolf. They need a wider sidewalk. But I think that, in the case of Trump, a bit more money might have changed hands. Not that many turned out for him, and damn it … Donald Trump? On Hollywood Boulevard? On the strength of one awful (though, admittedly, quite popular) television show? This is a man with an ego, and he wanted to be on the sidewalk, but not where some bum’s bum will be obscuring his name most of the day.

We left before his speech. Who gives a rat’s ass what Donald Trump has to say? 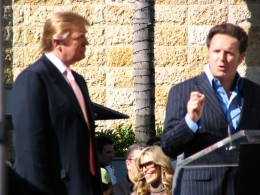 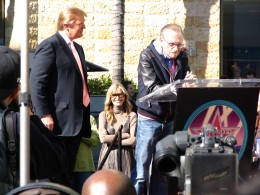 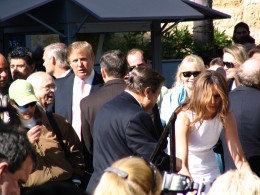 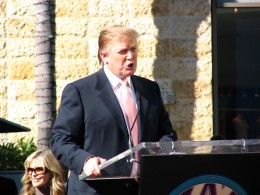 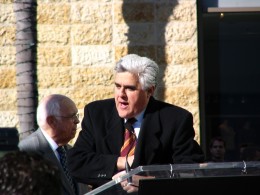