I have been a stamp collector since I was a kid soaking stamps off of envelopes and pasting them into notebooks. Then I sent away for a “Big Bag of 1,000 Stamps!” from the back of a comic book for a couple of dollars and got back stuff from all over the world. Switzerland, Japan, Norway, Mozambique, Suriname. Even Hitler’s face on stamps from the Third Reich. It was junk, probably not even worth what I paid for it, but I didn’t know that then, and they were real pretty little things, and I was hooked.

A few weeks ago the USPS released its preliminary list of stamps for 2019. They always add more later in the year, such as a George H.W. Bush stamp. You can see the list here. Just click on the name of the stamp to see what it will look like.

There is some nice stuff. Gregory Hines. (I didn’t know he was dead.) Marvin Gaye. The USS Missouri, which we saw in Astoria, Oregon, on its way to Pearl Harbor. I’m particularly impressed by the post office murals, which I think were done by WPA artists back in the ‘30s, and the wild and scenic rivers.

I got almost to the end … and there was a stamp celebrating “Woodstock, 3 Days of Peace and Music.” Why? Because this summer will be the 50th anniversary of that most iconic event of what has come to be known as “The ‘60s.” 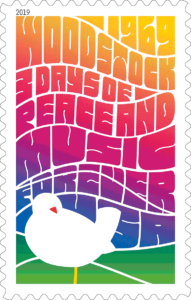 I was there! And do I ever feel old …

Not too long ago Bill Mahar did a snarky piece whose premise was that it was time for everyone to admit it: Woodstock was a disaster. Everyone was miserable. We were all soaking wet, muddy, and hungry. And there is some truth in that. All except for the miserable part. What I recall is smiling faces and a sense of community. (All too fleeting, as it turned out.)

Soaking wet? Muddy? Yeah, some of the time. But we were young, and hardly noticed it. What would kill me today was not much of a problem back then.

Hungry? Not really. What we had, we shared. People didn’t miss many meals, even after the small local markets were sold out of everything. And there were no $12 pizza slices or $10 burritos, like at that disaster area known as “Woodstock ’99.” Also no murders, rapes, or arson.

My Woodstock story is a little strange. Want to hear it?

We had worked our way across North America from San Francisco to New York City by way of Canada. I was exploring the possibility of becoming a draft exile. We knew a woman in Toronto, Susan Wood, who had been working with draft refugees for years. This was also the summer of Apollo 11. We watched the landing while staying for two months in Winnipeg in the house of a friend. I didn’t know it ever got over 100˚F in Canada, but it did that July. (Okay, 38˚C.)

(I discovered that I was an American through and through, and could never leave my country. I still am, even when we do something incredibly stupid like elect Donald Trump. I decided I would serve my time in prison rather than flee to Canada or submit to involuntary servitude in the military.) (Happily, I didn’t have to do either. But that’s another story.)

We got rousted by the Border Police at Niagara Falls. They took the car apart, and went through all our luggage very thoroughly. They confiscated a bag full of cherry bombs that I had forgotten I had. I bought them in Chinatown!

Our aim was to move to New York City. We had all our earthly possessions in the trunk and in a homemade luggage rack on top of the car. We found a place in Greenwich Village where we could stay with a friend for a few weeks, but after that we fled in dismay. Everything was too expensive. Even worse, apartments were hard to find. People use to cluster around the offices of The Village Voice, grab a copy hot off the presses, and literally run toward any new listings. People also scoured the obituary columns in the other papers, to see where an apartment might soon become available. Ghouls. It was too much of a rat race for us, though we loved being in the Big Apple. We decided to head back to the Haight-Ashbury.

I really can’t remember why we headed north out of New York City instead of west towards Pittsburg. Maybe we just wanted to see the Catskills? We had been vaguely aware that there was going to be a big concert somewhere out in the woods, but we had no idea where it was.

But soon we entered a traffic jam that approached gridlock. I had been looking for a gas station for miles, because we were running on fumes. Talking to other people in the jam, we learned that we had blundered into what we didn’t know then would turn out to be the most legendary rock concert of all times. All I was interested in was the fuel gauge.

After creeping along for quite a while, we saw a lot of people were driving into a big open field and parking their cars there. I didn’t see any alternative but to park with them and wait out the madness. Surely in a few hours the roads would be clear again.

That car become our home for the next three days.

If you didn’t have a VW van or panel truck, you could do worse than have a 1956 Buick Roadmaster as a home. Are you old enough to remember bench seats? Just like a sofa at home, and no seat belts. Air bags? We didn’t need no steenkin’ air bags! We didn’t need seat belts! You could fit a juke box and a dance floor into the back seat, and you could stretch out full-length on the front seat. No bucket seats, no console in the middle. What luxury that was.

Lee maintains I am one of the luckiest guys who ever lived. Well, we were sure lucky that summer. We had been camping out, so we had a little tent and a tiny Coleman stove and a fairly good supply of food. Graham crackers, Vienna sausages, cookies, peanut butter and a loaf of bread, powdered milk for my youngest son, Stefan (who we called Stuffy). Some canned soup and things like that. And we had just bought a carton of cigarettes. We were all set to weather the storm!

(When the deluge came, though, we found we had pitched our tent in a spot that didn’t drain well, and the tent was a little leaky, to boot. We retreated to the Roadmaster, and were warm and dry.) (So there, Bill Mahar! Asshole!)

Another stroke of luck is that Stuffy, who was a toddler at the time, had just learned to wee-wee into a plastic bucket. He also knew how to make poo-poo. That relieved us of what would have been a massive problem: washing diapers. We even had toilet paper!

The biggest problem I recall was getting fresh water. You didn’t want to get it from the pond, where people had been … well, you know. But a water truck arrived and parked about half a mile away. I walked over there several times to fill our containers.

I imagine most peoples’ memories of Woodstock are of the music. That’s not the case with me. My wife had polio as a child, and walked on crutches. We were about a mile away from the concert stage. She might have made it on the first day, when the road was dry, but after it turned into mud there was no question of getting there on crutches. So we all mostly stayed in the big field where our car was parked.

I made it to the concert only once, and didn’t stay long. Oddly, I can’t recall what band I heard. Possibly it was because I was so far away that it was hard to see them without a decent telescope. I looked out over the multitude of hippies, probably the most people I’d ever seen in one place. It was just too damn crowded. Finding a spot to sit would have been tough. And not really worth it, to me.

But we had our own little festival there in that anonymous field. There were probably three hundred cars parked there, and a lot of the people had come even better prepared than we were. All we had to do was wander over to one of the campfires to be offered food, beer, and (of course) more weed than you could shake a bong at. There was music everywhere, both recorded and live.

The spirit of community never wavered. Had it gone on another day … who knows? People were pretty worn out by the time the cars were finally able to get out of the field. I waited until all the cars were gone, plus another hour, so I could be reasonably sure that the roads had actually cleared in all directions, then headed out in search of gasoline. I fancied the car gasped and died of thirst as I rolled up to the one-pump country market and told ‘em to fil ‘er up with regular. We bought some potato chips and a few other things we had run out of. It was one of the more memorable experiences of my life. 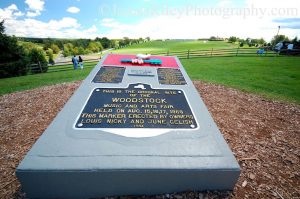 (Just about all that remains of that epic event is a small monument erected by the owners of the land. I think it is pretty creepy. It belongs in a cemetery. The Death of Rock and Roll?)

Then we hit the road again, still going north, deeper into the Catskills. There we lucked into staying at one of the decidedly less fashionable Borscht Belt resort camps, which had just closed down at the end of the season. We had the big, cobwebby, sort of spooky old hotel—ballroom, cafeteria, empty pool and all—all to ourselves, except for the elderly Jewish couple who were still hanging on desperately. All I had to do was a little cleaning to get the place ready for mothballing until next summer.

But that’s another story …