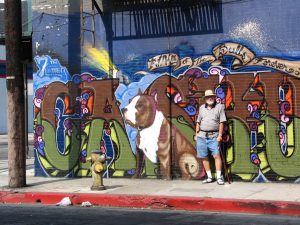 I think it may have started with SoHo in New York. It means “South of Houston,” which New Yorkers pronounce as House-ton, not Hus-ton. (Soho in London is not a contraction. It means “There goes the fox!” in English English.) SoHo used to be called the Cast Iron District because of the old, obsolete but fiercely defended historical warehouses that nobody could figure out what to do with. Artists moved in because the lofts were big and cheap, though also cold and damp. Soon other followed, and lofts were no longer cheap. More followed, with tons of money, and soon the lofts were no longer cold, damp, or big, either. In fact, they were hardly even lofts at all, except in a real estate broker’s imagination. They were basically apartments with the pipes showing, and living there meant you were one savvy and hip stockbroker/lawyer/arbitrager/executive yuppie scumbag, yes sir! 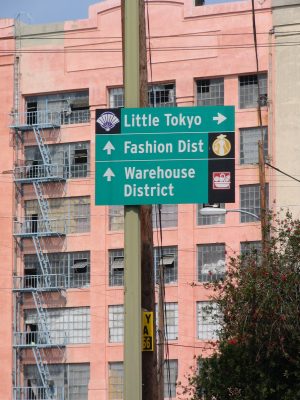 Eventually there was NoHo, Tribeca (TRIangle BElow CAnal Street), NoLIta (North of Little Italy) and many others. Wiki lists 77 neighborhoods in the Borough of Manhattan. Not to be outdone, Los Angeles has 173, more or less. (Of course, Los Angeles is vast, and Manhattan is small.) Out here NoHo means North Hollywood, where in the last decade or so someone decreed there should be an Arts District. Declaring it doesn’t make it so, though it is a nice area. There is another Arts District, east of downtown, and that’s where we parked our car to begin our day’s adventure.

Soon, we found ourselves in a miasma of districts. There were signs everywhere directing us to this district or that district, from Little Tokyo to the Historic Downtown Core. We didn’t actually pass through all these places, but we were close to all of them. I began to think of it as the District of Districts, or simply the District District. 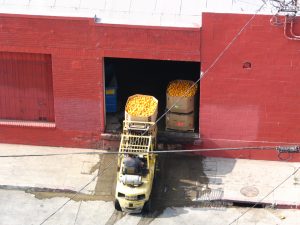 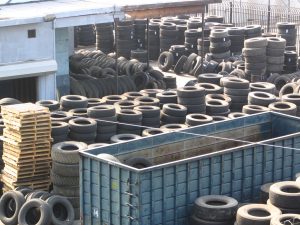 As in NoHo, merely proclaiming something the Arts District doesn’t mean a whole lot unless a bunch of artists decide to move there. We saw very little evidence of them, though it’s damn hard to tell what’s happening behind the filthy windows on the upper floors of these warehouses. We saw a lot of homeless people, more and more as the day went by, which wasn’t a surprise as we were on the fringes of the area called, officially, Skid Row. As with all the other places, the boundaries are indistinct. On the map Skid Row is bordered on the east by Alameda Street, but it stretches a lot farther than that.

(Later, back in the car, we drove through the heart of the Row, and the density of homeless, hopeless, soapless, and boozeless—“But I’m workin’ on it! Can you spare fifty cents?”—took on Calcutta-like proportions. Missions everywhere, and, naturally, the Greyhound Bus Terminal. It’s uncanny to me how Greyhound always manages to locate its facilities in the absolute worst part of town.) 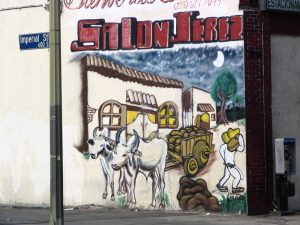 The Arts District and neighboring areas are rich in murals—Lee snapped them all—so maybe there are artists lurking about. For all I know Christo himself might be up there somewhere, planning to fill the Grand Canyon with Nerf balls or Vienna sausages. But the only artists I’m certain were there are the Pussycat Dolls. They have a “boot camp” in one of the warehouses. I didn’t know who they were—it sounded like a school for strippers—but apparently they sing. In skimpy clothes. Wardrobe malfunctions are probably common. 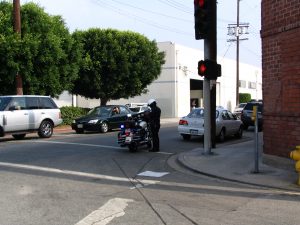 Soon we reached the river. We crossed it on the Sixth Street Bridge, which looks like it might be the one where some Hollywood action picture recently landed (preposterously) a private jet. Yeah, right, that was about the time I lost interest in that movie. Can’t recall the title, and don’t really want to. But if you are ever in LA, and for some unlikely reason find yourself in Boyle Heights, on the east side of the bridge, BEWARE!!!! LAPD motorcycle cops are lurking in large numbers somewhere around the stop light over there, and trailing unlucky motorists over the bridge where they pull them over and write tickets. We saw three poor saps getting written up. Major speed trap! Don’t say I didn’t warn you! 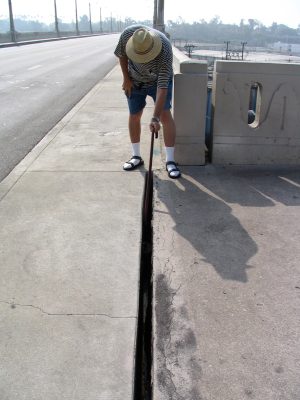 Actually, like most of the bridges across this usually non-existent river, this was more of a viaduct. (“Why a duck?” Chico asks, and Harpo says “Beep beep!”) The great majority of it is over land. Once over the river we looked down on warehouses that seemed to be devoted to food, the eastern part of Produce Row. We used to live in Portland’s Produce District; in fact, we were in the biggest warehouse in the area, until it burned down. (Not our fault. We were long gone.) And we made a startling discovery about this viaduct. It’s broken! I’m not kidding! You know how bridges have expansion joints so they won’t crack? One of these, on the east side, is easily 6 inches wide now. You can see the river through it. Now, since it was built in 1932, this structure has already weathered several earthquakes. But we decided to put it on our short list of Places We’d Rather Not Be If the Big One Hits. 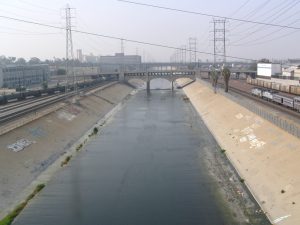 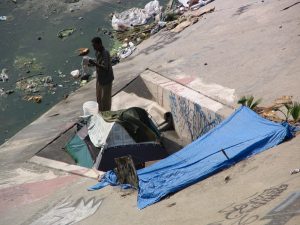 Just on the other side of the river is the place where the I-10, the I-5, the 60, and the 101 get into a knock-down drag-out fight as to which is which. They’re hopelessly tangled up, to the point where Caltrans ought to put up a big sign saying “YOU Figure It Out!” I stood over this maze for only a minute, and saw two vehicles swerve across two lanes when they realized they were almost on their way to Pomona, Santa Ana or, even worse, East LA. One of them was an 18-wheeler. A place to avoid, it at all possible.

Boyle Heights is another of those places where most white Angelinos never venture, as it is 94.95% Hispanic. Gang activity used to be rampant there, but I understand it’s a little better now. It didn’t look that bad—no huge amount of tagging—but we didn’t linger, mostly because we only had to go one block to cross back over the river on 7th. This took us over a portion of the river where there has been major tagging, and past the place where they park the ice cream trucks at night. I sure wish one had been operating, as the sun was rising higher in the sky and I could have used a frozen fruit Popsicle.

On through the edges of Skid Row and the Toy District. There was a glorious mural devoted to the memory of one Cashus, “King of the Bulls Forever!” He seems to have been a pit bull, and I hope the person who admired him so much as to make this magnificent memorial wasn’t talking about his skills in the fighting pit. Pit bulls can be gentle, loving animals. Petey from the Little Rascals was a pit bull. He also played Buster Brown’s dog Tige.

Most of the toy shops weren’t open yet. (We’ve been walking in the early mornings because, though LA has been spared the 100—115 degree weather much of the West has been suffering under, walking even in the mid-80s can be a sweaty business.) One that was open specialized in piñatas.

Then back to the car, past blocks and blocks of new apartment buildings going up. Apparently labeling something the Arts District does have an effect. Used to be, the artists would move in, then the hangers-on, then the urban adventurers, then the yuppies. The process took 20 to 30 years before the place was completely “gentrified,” meaning ruined in every possible way, all the rough edges and sense of history filed off or painted over or razed to the ground, all the things that had made it attractive to live there in the first place carefully stamped out. Most of all, the street people, the working poor, the SRO hotels eliminated. (Where did they go? Who the fuck cares?) Now it seems they can do it in only 3 to 5 years. Progress! Soon, they’ll be able to do it in a few months.

Mark my words, the day they start taking down the “Skid Row” signs and replace them with “Historic Skid Row,” it’s gonna be time to tie up your bindle, load up your shopping cart, and run before the bulldozers accidentally bury you in concrete. Don’t believe me? Go visit the “Pioneer Square Historic District” in Seattle. Want to guess what it used to be called?