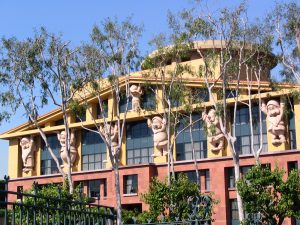 We began the day where we’d left off the day before: Up to our ankles in horseshit. Well, not actually that deep, but there was a lot of it around, as we were now on the west side of the Equestrian Center, on the sawdust trail, horses to the right of us, horses to the left of us, horses in front of us and horses coming up behind us. Some of the horse riders had dogs with them, all of them obediently pacing along beside the horses. There was one woman jogger who had two off-leash German Shepherds who were not under voice control. We witnessed these dogs annoying a horse and rider. “Sorry! Sorry!” the jogger said, as she got the dogs beside her. Bad dog owners (not owners of bad dogs; bad owners of poorly-controlled dogs) are always saying this. “Sorry!” We wanted to slap the silly bitch. Doesn’t she know that a dog can spook a horse, that a horse can shy or rear up, or even go into a panic and gallop away? Doesn’t she know that people can be thrown from even the gentlest of horses, and break their heads open on a stone or crack a bone in their necks? She had no business with those dogs on the horse trail. Even with them on a leash it’s not a great idea. Some people, huh? 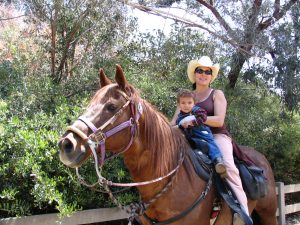 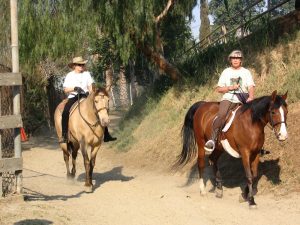 The trail came to an end eventually, and we found a way back to the city streets by way of a freight area of the Disney Studios. We were coming into the realm of The Mouse.

Riverside Drive runs along what used to be the backside of Mickey Territory. In recent years the studio has not only been added to and remodeled but expanded, with a wedge of land between Riverside and the river devoted to animation. It’s a great building, with a giant hat from Mickey’s appearance as “The Sorcerer’s Apprentice” in Fantasia. This may be where the old back lot was. I’m not sure. The original Buena Vista studios were built in 1939. That’s when Walt and company moved from the old studios in Silverlake on Hyperion Avenue. Back then animation was all they did, so they didn’t need big sound stages. But they moved into live action, built all the infrastructure needed for that, and much of it is still there, except the back lot.

I visited the studio several times in the early ’80s, meeting people for a project that never panned out. It was my favorite studio experience. There’s something about driving up to the gate and having the guard tell you to continue along Mickey Boulevard and then take a left at Goofy Drive … 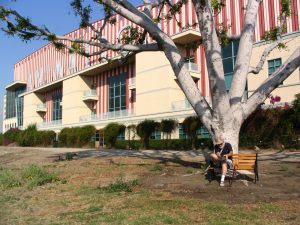 Back then the studio buildings all looked very much like my old high school. Nothing fancy at all. Two- and three-story yellow brick structures with rows of windows that might easily have classrooms behind them. I was meeting with Jeffrey Katzenberg, whose office was at the end of a long linoleum hallway with actual corkboards lining it, just like in high school, but the first whiff of change was in the air. The door was new, big, fancy, unlike all the others. Big potted plants stood on each side. Beyond, everything had been stripped out and replaced with Hollywood Lush furnishings. Walt’s office had been nothing like this, I was sure. This was going to be the New Disney … and frankly, at the time Disney badly needed some new blood; it was moribund, hidebound, and “What would Walt do?” had been replaced by “If Walt didn’t do it, we don’t want to do it either.” A breath of fresh air was needed. Katzenberg revitalized the animation department, made it the place to be in that field. Eisner revitalized the parks. But in the end something was lost. Katzenberg and Eisner were pulling down multi-million-dollar salaries. Some years Eisner was making $100,000,000 or more. Did he deserve it? I guess so; he delivered. But still …

You gotta like what he did to the place, though. The old buildings are still there, but are almost hidden by the new stuff, and it’s great stuff. In place of the old entrance there is a grand arch with stylized metal palm trees. Just beyond that is the glorious Team Disney Building, designed by Michael Graves, with its facade of seven giant dwarfs (I know, there is no such thing as a giant dwarf, which is what makes them so appealing). My only complaint is that the building is oriented so that it’s difficult to get a good view of them unless you’re on the lot, which you can’t be unless you have business there. There are no studio tours, which I think is a mistake. 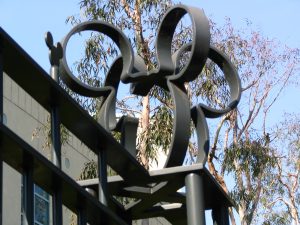 We walked up Buena Vista Drive to Alameda, on the west side of the lot. The entire place is surrounded by a green fence that’s ornamented with outlines of the Mouse’s head, three circles that are one of the most famous symbols in the world. This being an empire built on short cartoons starring the Mick, I couldn’t help but be reminded of some of the more violent Warner’s and MGM cartoons of the Golden Age. Remember how Daffy or Tom the cat or Yosemite Sam would sometimes be hit over the head with a crowbar or a length of pipe … and when he fell to the ground there was an outline of his head in the twisted metal? Ouch! I hope they didn’t have to hit Mickey over the head like that to get all those shapes … 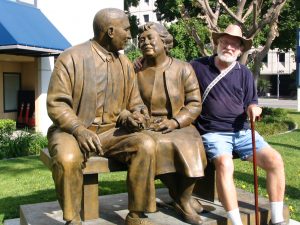 I had to make a pit stop at Providence St. Joseph Hospital across the street. Out front there is a life-sized statue of two of the place’s main benefactors: Roy and Edna Disney. He was Walt’s brother, and the financial side of the company. Probably the main reason Disney Studios came through some very lean times to become the colossus it is today, the only Big Ten Studio to survive intact from the 1930s and not be bought out by someone else. The living Roy Disney, the one who finally managed to oust Eisner and who is widely seen as the custodian of Walt’s vision, is Walt’s nephew.

I had intended to continue on to Johnny Carson Park, but at the corner of Alameda and Willow Street I pooped out. I couldn’t go another step. This was unfortunate, as I now had to get all the way back to the car, and I’m too big for Lee to carry … 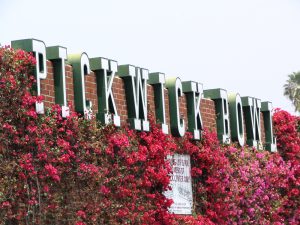 But we made it. At the end of our journey I was worn out and dehydrated, so we stopped at the Pickwick Banquet Hall, Ice Skating Rink, and Bowling Alley, and refreshed ourselves with ice cream drumsticks and a big iced Slice. We watched a group of old geezers bowling. They were too arthritic to lay the ball down smoothly on the alley, and they weren’t getting a lot of strikes—a few, but not many—but they were uncannily good at picking up spares. There were almost no open frames. I decided these fellows had been quite the bowlers in their prime.

And that would be the end of this installment, except for something else that happened. We drove home through Griffith Park, as we were still at the point where that was a shorter route than the Cahuenga Pass. By the zoo, the Autry, the twin golf courses where we saw a group of deer a few weeks previously, grazing on the fairways because the hills above were so dry and barren this year with no rain …

I took a nap, and while I was sleeping a fire broke out somewhere in those hills. They say it was probably caused by a man smoking in a restricted area, falling asleep, and setting himself and the brush on fire. When I got up and went outside I saw a big cloud of smoke. Our apartment has no view to the north, where the park begins less than a mile from us, so I told Lee about it and, firebugs that we are, we piled into the car and soon saw that it was an inferno. We drove to Barnsdall Park, a little hill near the junction of Hollywood Boulevard and Sunset, about a mile east, drove up there, and joined a few dozen people watching the park burn. There were flames everywhere. Every few minutes helicopters buzzed the worst places and dumped water, but anybody could see it was getting out of hand. We watched for a while, then went home and followed the progress of the fire on television. 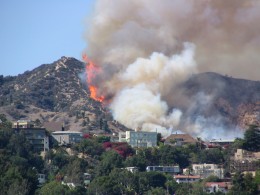 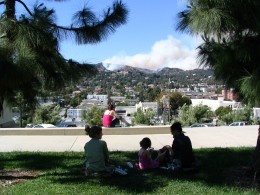 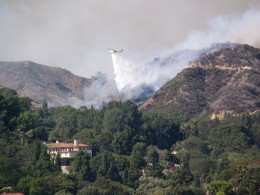 Later, after dark, we were going to the supermarket and as soon as we rounded the motel on Hollywood we were stunned to see huge flames all around the Observatory on the hill. So we went back and got in the car and drove up and down a few streets. Fire was everywhere to the north. The radio told us people were being evacuated from the extreme northern streets of Los Feliz. We went back to Barnsdall, which was now jammed with people. We managed to find a parking place and joined the throngs there staring in horror at a truly apocalyptic scene. The whole sky looked like it was on fire as the orange flames reflected against the clouds of smoke. We watched flames rush up hillsides, where they would be met by flight after flight of helicopters flying (very courageously, considering all the power lines and lack of visibility) in the dark. The zoo was threatened. There were power outages. Los Feliz Boulevard was closed.

You probably saw it on the news, and you know that, though a huge part of the park burned, no houses were destroyed and the infrastructure of the park was spared. The flames never came as close to the refurbished observatory as they seemed to be from our vantage point, and the zoo animals were unharmed. But it was a close thing … and I’d like to thank, along with all Angelenos, the LAFD for their hard work.

Oddly, the park doesn’t look all that different now, from the ground. Most of the destruction was back in the parts that only hikers see up close, and the burned parts that you can see are not black, but gray with ash, and sprinkled with both living trees that the fire missed and the skeletons of those that were partially consumed. In other words, barren, as it looked before. I’m sure many small animals are going to suffer in the months ahead—there are already reports of bobcats and coyotes being seen far from their normal habitats—but fire is part of nature’s cycle. It had been too long since some of this land had burned, and it will recover naturally, though there are calls for reseeding and replanting. We’ll be following that debate, and watching the hills warily for the rest of the summer and fall, and hoping for rain this winter … just in time for the mudslides! It’s just one adventure after another in Los Angeles.