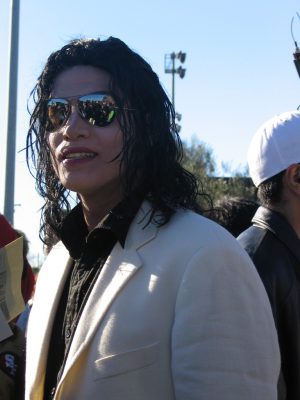 We braved the mobs and possible riots if he was found guilty, and all because of you, my friends and fans. Because we care about you, we fulfilled our pledge to monitor the proceedings in nearby Santa Maria and give you the inside (well, actually, the outside) scoop.

We were there when he was arraigned, when he did the moonwalk on top of the SUV. (Well, technically, we only saw that on TV, since we were on our way to Neverland at the time.) We braved the sinister interior of the world’s biggest boy trap. We petted his giraffes, ate his Haagen-Dazs, goggled at his flamingos, rode on his choo-choo train, sneered at his expensive glitzy art. We peered into his windows and saw somebody who might have been Mark Geragos.

We documented the rise of the tent city and the dish forest outside the humble Santa Maria courthouse, and marveled at the famous faces all lined up in rows with reflectors or lights bathing their heavily made-up faces as they chattered on endlessly. We couldn’t hear what they were saying, but we watched. We drove by several times during the actual trial, when even his looniest fans crawled back into their burrows and left it to a handful, sometimes as few as 6 or 7, to wave signs and chant. We noted that always, even on verdict day, the fans were outnumbered by the 1100 members of the press corps.

We thought about actually attending a day in the courtroom itself. All we’d ever actually seen of him was a pale hand waving from under an umbrella. Astonishingly, during the middle of the trial it wasn’t hard to get inside; there were empty seats. But we decided that was going a little too far. We detest going through body searches, and there’s no place more boring than the inside of a courtroom. We felt we’d already gone the extra mile for you.

Lee practically wore out her new Canon snapping pictures of the oddballs on the outside. 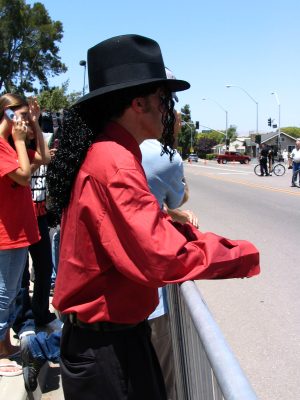 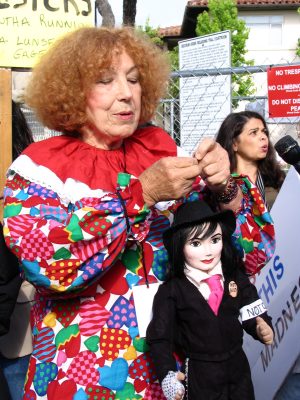 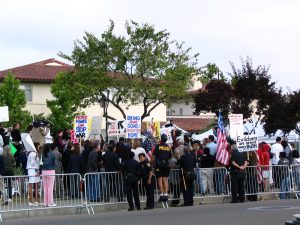 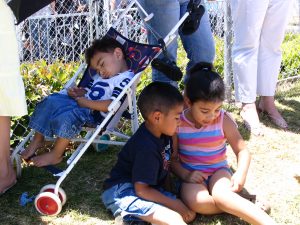 We never returned to Neverland. We knew there was a show going on there, too, outside the gates, but that show was the growing hatred between the fans, the press, and the locals, one of whom was so moved by it that he drove his pickup truck right through a quarter of a mile of the long roadside “Chain of Love” fans had erected. Fans responded by putting the chain back up, with nails in the poles. We knew from a friend whose child was going to school literally right across the street from the place, that the traffic was a major bummer to the people who lived there, and by going to take a look we’d simply be more of the problem, so we didn’t go.

So when the alert came, when it was announced that the verdict would be read in one hour, we hopped in the car again and half an hour later we were there. The radio was warning about bad traffic around the courthouse, but we were able to park two blocks away, in a residential neighborhood that is so glad today that this is all over. (Sorry about that, Santa Marians, but we had to get the story!) 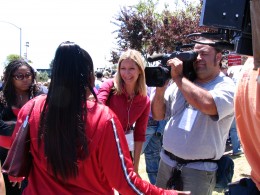 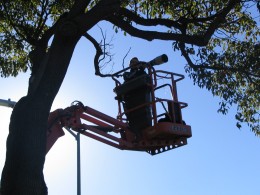 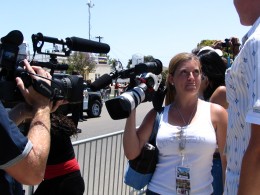 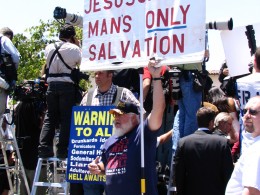 It was by far the biggest crowd we had seen yet. Every one of those 1100 reporters and cameramen and crew and grips were there, far outnumbering the several hundred of the most faithful. There was also a sizeable contingent of Jesus freaks, whose leather lungs easily outshouted the groupies. There were 30 cops in the no-man’s land of the closed-off street, and they went down the road warning people not to cross the barricades, no matter what happened. They had riot helmets and ample supplies of plastic cuffs. They were loaded for bear. They had their own woman with a videocam, noting all our faces for possible prosecution later if we were seen to be getting violent. 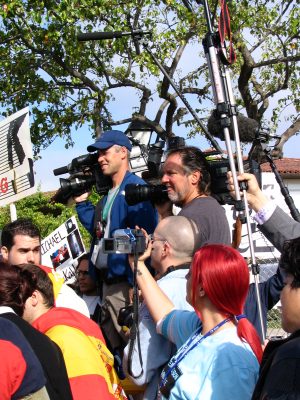 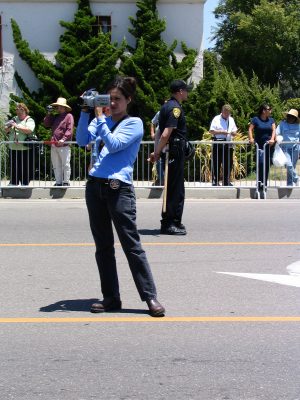 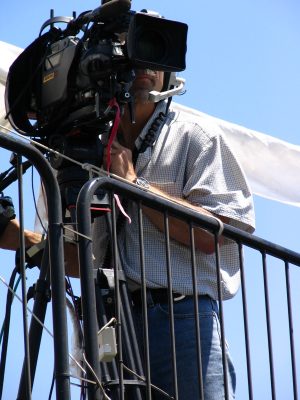 The day grew warm, and he didn’t arrive for a while. A lot of locals started to show up. They were easy to tell from the fans; mostly they were across the street where we were, and they had probably planned their escape route, just like we had. 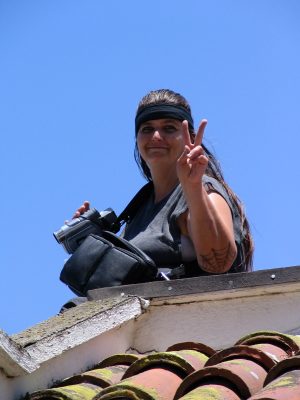 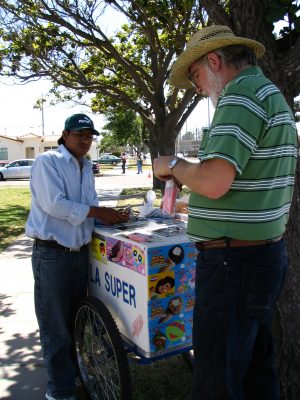 And then the motorcade. The first sign was the arrival of three news helicopters that had followed the sinister black SUVs from the Neverland gates. A stir in the crowd. “He’s turning off the freeway onto Main Street!” The cops blocked off more of the road, poor locals being shunted onto side streets. The roar of six motorcycles, and there they were, five or six big vehicles with impenetrable black glass, turning into the courthouse driveway. A pause, then a roar as the ones pressed up to the fence saw the pale, trembling, tragic figure limp from the SUV to the court.

Then a wait. The crowd held its breath. We were close to a woman with a radio.

A huge cheer after each verdict. A dove was released, then a hundred white helium balloons. And we left.

Honest to god, I had really thought they were going to convict the son of a bitch.

Lee said it as we walked back to the car. Something like, “He’s too famous to go to jail.” And I think she’s right. Rich people have been sent up, despite spending millions for scumbag lawyers. But Americans just won’t send a super-famous person to jail for a long time, no matter what he’s done. OJ walked, Robert Blake walked. Now this piece of shit has walked.

Martha Stewart? Is that the flaw in my reasoning? I don’t think so. Poor Martha made the mistake of committing a piddlysquat crime that happens a thousand times a day on Wall Street, and of running into a prosecutor who wanted some limelight. If she’d killed somebody she never would have spent a day in jail, you can count on it.

My advice to celebrities: sweat the small stuff. Don’t drink and drive, don’t jaywalk, don’t toke on a joint. We’ll nail your ass.

I guess I can’t really bring myself to be too upset, in the end. One hates to see injustice, and I grit my teeth every time I think about OJ pursuing the real killers over the finest golf courses in the world, but what can you do? The world has never been fair.

But the next big one to come to court is that human scum, Phil Spector, and that one’s personal. That crazy fucker killed someone I knew, and I don’t know how I’ll handle it if he walks, or rather dances away, bopping to a tune from The Crystals or The Ronettes.