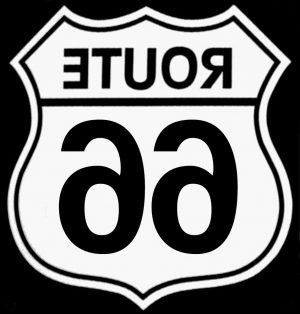 If you ever plan to motor east
Take the road that goes two thousand miles, at least.
Get your kicks on Route 66.

It winds from the California sand
To Chicago, that’s a mighty stretch of land.
Get your kicks on Route 66.

Won’t you get hip to this timely tip:
When you make that ‘cross the country trip.
Get your kicks on Route 66.

~with apologies to Bobby Troup

We have walked legendary Sunset Boulevard from Olvera Street to the sea. We have trudged along every mile of Wilshire Boulevard, from downtown to Santa Monica. We have even conquered the mighty Los Angeles River, Canoga Park to Long Beach. What new challenge might we take that could compare to those awesome urban explorations? What new Everest can we climb, what new Lake Victoria might we discover in the smoggy concrete wilds of Los Angeles? It seemed impossible.

Disconsolately studying the map that covers an entire wall of our bedroom, one number leaped out at me: 66. Well, it didn’t precisely leap, I had to use a magnifying glass, as it doesn’t really exist anymore, officially, having been replaced along its entire length by the soulless 4-lane efficiency of various Interstate highways, mostly I-40. 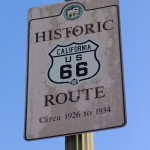 But there has been a nostalgic resurgence of interest in the old Route 66 in recent years. You can see the signs as you barrel down I-40: Historic Route 66. These turnoffs will usually take you to a decaying downtown area that was blighted by the arrival of the Interstate, which bypassed the places people actually lived in favor of straightening out the line and saving time. Always saving time. Don’t get me wrong, we drive on them, too, and we’re often in a hurry. But sometimes we’re not, and we get off, and discover a mining museum, or a diner that offers food much better than McDonalds or Denny’s, or a motel consisting of a dozen plaster wigwams. You just never know. 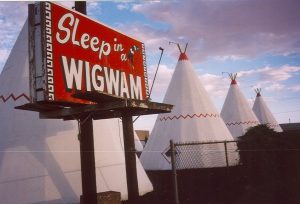 Here in Los Angeles you can see the signs, too, every few miles: Historic Route 66. There’s just something wonderful about that, don’t you think? That old song captured our imaginations. This was the road America went west on. It cut through the heart of the Dust Bowl, and once was thick with Okies and Arkies headed to the golden fields of California in their rattletrap Grapes of Wrath flivvers with all their possessions strapped to the fenders. It was the road two television dudes in a corvette traveled on … well, with a few little side trips, as far afield as Maine. It is also known as the Will Rogers Highway, The Main Street of America, and The Mother Road.

We have decided to walk it.

Okay, it’s highly unlikely we’ll make the whole 2000 miles. We expect to give out around 20 or 25, somewhere around the Santa Anita racetrack in Arcadia. We’re urban explorers, after all, and a lot of 66 goes through territory that would fry a lizard and starve a buzzard and has about two humans per hundred square miles. Road runner and Wile E. Coyote country. No, thanks. So we’ll just do what we can. 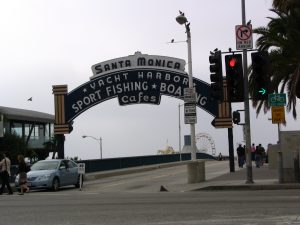 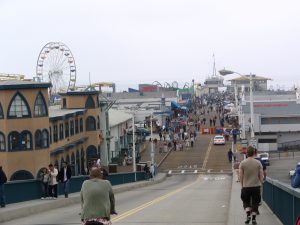 Researching it, I found that the original terminus of the highway was downtown Los Angeles, but many changes were made to the route as the years went by, and the final version, just before the number 66 was retired, ended at the ocean, at the end of Santa Monica Boulevard. So that’s where we’ll begin our retro journey …

We won’t actually walk today. Lee wanted to begin on a Sunday, because two blocks south of Santa Monica Boulevard, which is the beginning of Route 66, is Colorado Boulevard, which extends out into the ocean a bit on the Santa Monica Pier. This is the last survivor of the Pacific piers, of which there were quite a few at one point, including Lick Pier in Venice Beach, where Lawrence Welk used to perform. Santa Monica Pier today is slick and touristy, with restaurants like Bubba Gump, except for the parts down below which still has a rundown Coney Island feel to it. Beneath the pier is a small hands-on aquarium that’s mostly for children. 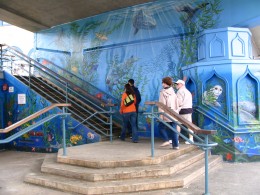 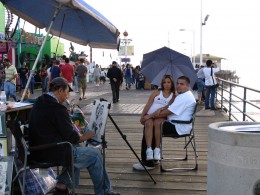 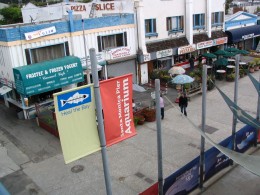 For many years now (I’m not sure when it started, but it was sometime after a certain asswipe on an aircraft carrier declared “Mission accomplished!”) the sand just north of the pier has been the home of Arlington West, Santa Monica. There’s an identical one in Santa Barbara. Lee and I have visited each one several times to see them, sadly, grow. Early every Sunday morning volunteers set out white wooden crosses, one for every American soldier killed in Iraq. It wasn’t a huge job at first. It’s a gigantic one now. 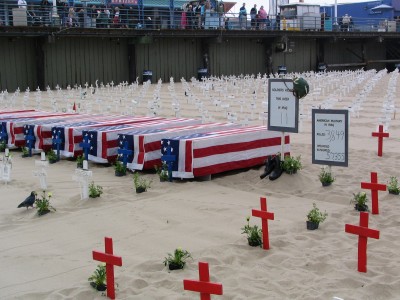 In fact, it’s become too big a job for the hard-working volunteers who have been giving up their Sundays for years now. There are now so many American dead that they can no longer put up a cross (or crescent, or star of David) for each casualty. They’ve begun putting up red crosses to symbolize ten dead soldiers. There are now four rows of such crosses so that, large as the field of death is, it would be 36 rows wider if there was a cross for every man and woman whose life George W. Bush and his criminal crew has sacrificed to his pathological insecurities.

If there was a crescent for every Iraqi who has been killed since “Mission accomplished,” the memorial would stretch almost to Malibu. I’m not kidding. 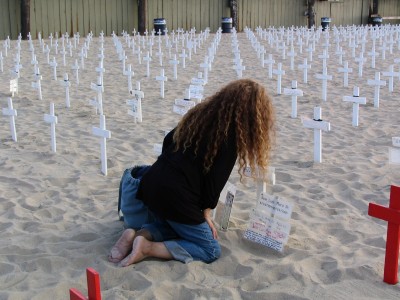 And you say impeachment for war crimes is off the table? It’s not off my table. I’d go farther than that. I’d like to see a second Nuremberg tribunal convened just as soon as Bush retires to kick shit in Crawford, and Cheney tries to crawl back under his rock in Wyoming to count his Halliburton money. The head of Blackwater can be there, too, and Karl Rove, and Condi Rice, and a long list of others. Let them defend their actions before an international court of law. It was good enough for Göering, it should be good enough for these American Fascists.

Enough of that. It’s a peaceful place, like Arlington, Virginia. Everyone is very quiet, and about all you can hear is the sea and the quiet playing of taps on a tape loop. These honored dead will one day have their permanent memorial, I’m sure (though I’m far from sure what will be written on it, other than their names), but until then, this will do. This will do.