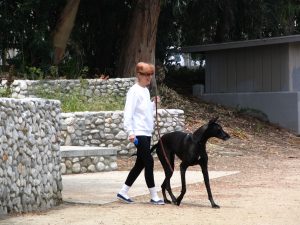 Well, phooey! I had this document open, somewhere, and we went out to do some things around town. When I came back I tried to open it, and got a box that asked if I wanted to revert to the saved document. Sounded reasonable. WRONG!!! The whole page of stuff I’d written—and apparently not saved!—went down a cyber rat hole. Gone. Now, I ask you, was that a confusing thing to ask, or what? Revert to the saved document? It still sounds reasonable. But it led me to disaster. Sometimes I hate computers. I’ll bet you do, too. Now I am going to SAVE ….

Now, where was I?

We parked just off Laurel Canyon and were going to get on the path by the river, but we were distracted at once by the Studio City Farmers Market. We are frequenters of places like that, in particular the Hollywood FM on Ivar every Sunday. No way we were going to walk past this one. 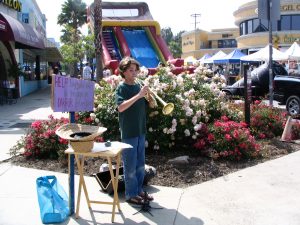 It soon became clear this was a very good one. In addition to all the usual lovely produce, flowers, candles and crafts, and food, it was very kid-friendly, with a mini-carnival for the 6 and under set. There was a little choo-choo that ran on the sidewalks, and a petting zoo with pot-bellied pigs, goats, rabbits, chickens, baby chicks (awwwww!), and parents hovering about. There was an inflatable slide, and a pony ride with six placid nags. I remember pony rides vividly from my early childhood in Austin, Texas. In fact, it’s about the only thing I remember from Austin. Most of the kids seemed to approach the business of riding a real horse solemnly, concentrating on the serious business. But one little chubby-cheeked doll was hamming it up like the queen of the Rose Parade, giggling and waving at everybody. When the ride was done she didn’t much want to get off and I thought she might cry, but she went the other route instead, determined to make Mom’s life a living hell until she got to go again. “Please, please, please? Just one more ride?” 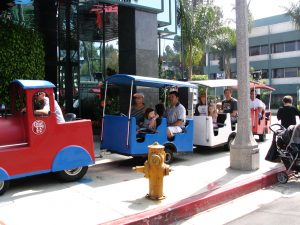 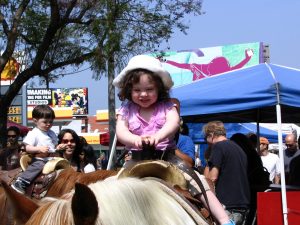 There was something else and I don’t know the word for it. It wasn’t a merry-go-round because there were no wooden horses, and it wasn’t a swing, really, because it didn’t go back and forth but in a circle. You’ve seen the adult version at county fairs and carnivals, buckets you sit in at the end of a chain, and it goes around and you swing outward. (Can anybody help me here? I hate it when I can’t think of a name.) Five of the kids were having a great time, and so was the sixth, a very young one, maybe two or three, for the first dozen revolutions. Then he abruptly decided he didn’t like this thing at all, and started to bawl. They stopped the ride, got the little ‘fraidy-cat off, and plugged another delighted rug rat in his place. That day will probably scar the little guy for life, don’t you reckon? 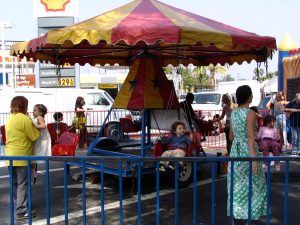 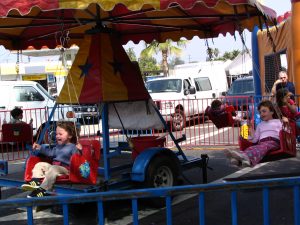 When we were done at the market, we headed back to the river. Once more, a perfectly good pathway was locked behind a chain link gate. Why? I have no idea, because there was plenty of room to walk around it, except that it was along a drainage channel and there was a low railing between the channel and the path. Just making things tough for urban explorers like us, I guess. Well, it didn’t look like much of a problem, so I started down and found a good place to cross the railing … or what looked like a good place, anyway. I got one leg over, grabbed the rail … and the rail leaped up out of the ground and snagged the heel of my shoe. I know, it sounds unlikely, but I’m sure I had my leg up high enough to clear the rail, it must have jumped up! Next thing I knew I was hanging there, on one leg, losing my grip. My hand slipped off, and I was falling through the air …

I landed on my butt, hard enough to rattle my back teeth. Next thing I knew I was on my back. Lee, who loves a pratfall more than anything on Earth, didn’t laugh. (She wouldn’t have been here to post this message on the website if she had laughed, I’d have been looking for a plot for her in Forest Lawn.) I sat up, checking myself for damage. I had very minor scrapes on my elbows, but seemed to be all right other than that. 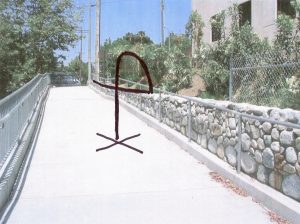 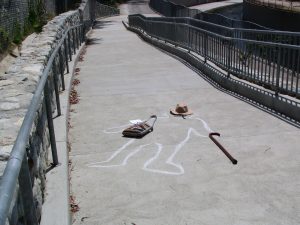 I wasn’t. We resumed our walk, and I’d intended to go all the way to Coldwater Canyon Boulevard, but halfway there, at Whitsett, I realized I wasn’t doing all that well. In addition to the sore neck that I routinely get along about this time, I had major lower back pain. I could hardly bend over, and walking was hard. We made it back to the car, but only just. Getting into the car was agony; my back just didn’t want to bend. Driving was no fun. Getting out … well, I don’t even like to remember it. I stumbled into the apartment and collapsed on the bed … and that hurt, too. Everything hurt, all the time. Hard to believe a little tumble like that could screw me up so badly. But I’m 59, soon to be 60, and the old bones just aren’t as resilient as they used to be.

I was laid up for most of the next day. Lee had to move to the couch, as I needed the whole bed to sprawl out in whatever position afforded a few minutes of comfort.

Okay, so I’m whining, and that’s not nice. I’m better now. A predatory person would be drawing up a lawsuit against the city of LA, but I’m above all that. But it really stinks, them cutting off the regular access to the path and forcing an old codger like me to climb on monkey bars to get down there. I mean, really!!! It pisses me off.

Who knows what awful obstacles we’ll have to overcome before we reach our goal, the fabled headwaters of the Los Angeles River? But we’re not quitters! We’re winners! We have a plan, and an exit strategy, and we will not be denied! Onward and up river! 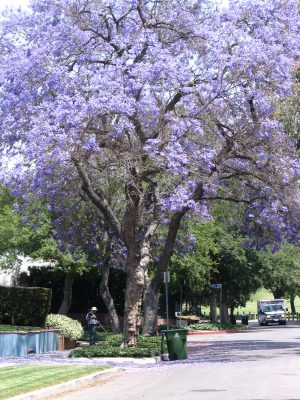 Have I mentioned the jacarandas? Los Angeles is simply bursting with them, though like the palm trees, they are not native. They bloom twice a year, in spring and fall, covered with pale purple flowers. They have been in bloom for much of our riverwalk, and they catch our eye every time. The ground around them is now covered with purple, too.

The next walk could be divided into two parts, just about equal. This time getting to the river was easy, just walk around a gate on Whitsett that was intended only to keep motor vehicles out. That took us down to the river along Valleyheart Drive, which keeps switching from one side of the river to the other … sometimes going on both sides, which must be confusing to non-natives. To the south, up an embankment, were the backsides of the businesses that line Ventura Boulevard. Across the river was a golf course and tennis courts. We walked along to the thwacking sound of volleying we couldn’t see, though we got a glimpse here and there of fat guys hacking at golf balls from electric carts and calling it exercise.

This was one of the worst stretches we’ve walked in terms of trash, but it was interesting trash. What I mean is, even the winos here seemed to have good taste. We came upon a discarded 6-pack. Bud? Miller? No: Corona. And then an empty box of organic bean sprouts. Best of all, in place of fortified wine—Thunderbird, Night Train, or MD 20-20—or cheap rotgut whiskey, there was an empty bottle of Grey Goose vodka, which I, though not a drinker, understand to be a premium brand. Nothing but the best for the alcoholics of Studio City! 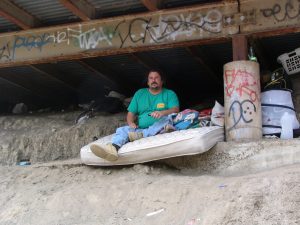 A little farther on there was a place where the concrete from a big parking lot jutted out and left enough space underneath to create a dry shelter. There was a guy up there with a mattress and other essentials. Lee asked if she could take his picture and he asked for money. She never photographs homeless people without asking permission (unless they’re passed out), and we always tip. We talked with him a while. His name was Joe, he was in the building trade, and he’d been living there for a few years. He worked odd jobs, had just got laid off and had injured his ankle. He seemed like a nice guy, kept the place as neat as one could expect with a slanted dirt floor. No evidence of alcohol abuse, but of course we’ll never know his whole story. We wished him good luck.

Then up and over Coldwater Canyon Avenue, and down to the river again. This part had been “adopted,” and was a whole new world. There was landscaping and trash cans. Lee observed that just the presence of trash cans can clean up an area significantly, and I think she’s right. Even if they are overflowing, most people toss their trash there. And obviously somebody came through here every once in a while and cleaned up, like people who adopt a mile of highway. And it didn’t hurt that the embankment here was only a few feet, and the slope was gentle. People walked their dogs here. We met a woman with a beautiful Great Dane, AJ, which she said was her eighth since the 1960s!

We scouted out the next day’s journey, and it wasn’t promising for getting to the river. At Moorpark and Dixie Canyon, right across from Saint Francis de Sales Church, gates and a big apartment complex blocked off all river access. Well, we’ll figure something out. We always do. 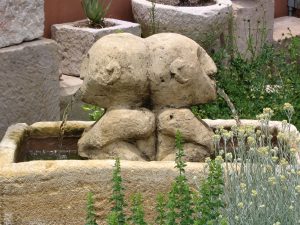 Back toward the car along Ventura, we encountered a lot of upscale restaurants and interesting stores. There was a Thai furniture store with some really great carved chairs. We tried some pastries at a Portuguese bakery. Best of all was a place called Garden Temple, which specialized in big outdoor fountains, scaled-up versions of the little ones you can buy at Walgreen’s for $20. These were portable fountains, not built-ins, and there were so many of them in their back yard that it sounded like you were in the middle of a perpetual waterfall. Lee took a picture of almost all of them, and we can’t really put all of them here, but if you’re in the neighborhood it would be a good place to stop by and take a look. 13055 Ventura Boulevard, Studio City. If not, you can get a good idea of their stuff at www.gardentemple.com.