Hood River, Oregon, is a pretty little town located on a scenic, gentle bend of the Columbia River. I don’t know what causes it—possibly the geography of the Columbia Gorge?—but the wind there is often pretty brisk. Which is why it calls itself “The Windsurfing Capital of the World.” It is a mecca for those crazy people who practice windsurfing and outrigger canoeing, and the even crazier ones who kitesurf. Other than that, its main claim to fame, for me, is that it was the childhood home of my old friend, Damon Knight, one of the founding fathers of the Futurians, one of the earliest science fiction fan societies. Damon started publishing fanzines at the age of eleven, and published novels and short stories as early as 1941. He was the author of the story that became one of the all-time fan and critical favorite Twilight Zone episodes, “To Serve Man.” Remember “It’s a cookbook!”? If not, look it up. He was the founder of the Science Fiction Writers of America (SFWA). He was married to Kate Wilhelm, and together they established both the Milford and Clarion writers workshops. Sadly, Damon moved on to that Big SF Convention in the Sky in 2002. 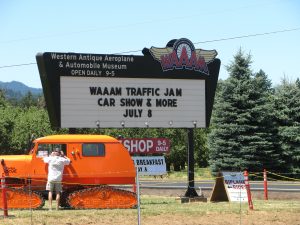 The town is on two levels, but until recently I was not aware of that. We had only driven through town on the I-84 or taken the main route through town. But there is an upper level, and there you can find the Western Antique Aeroplane and Automobile Museum, just north of the airport. We had never been there, but when we learned there was to be a car show, I checked it out. Regular admission was $14 for seniors, but on the day of the show they were only charging $10, and that gave you access to not only the car show outside, but the museum, too! Heck of a deal.

It turned out to be a perfect day, with a totally clear sky and temperatures in the 70s. And I learned something else. The town is located almost exactly halfway between Mount Hood and Mount Adams, neither of which can be seen from down by the river. If you faced one way there was good old Hood, the pointiest of the Cascade volcanos. Turn 180 degrees and there was Adams. Mount Adams is probably the most obscure of the mountains. Hood and St. Helens are visible from Portland on a clear day, and Mount Rainier can be seen from some of the Seattle Area. Adams is not near any population center. There is some skiing there, but nothing like at Hood or Rainier. It’s actually pretty hard to get to. (More on that in another post.) I was surprised to learn that, in terms of sheer bulk of ejected material, Adams is the second-largest in the Cascade Range, behind only Mount Shasta. What a treat it was to see both of them standing out so prominently. 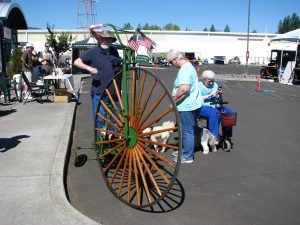 Cars were still arriving at the car show when we parked, including a lot of Model-Ts parked in a row. There were six of us: Lee and myself, my sister Francine and my brother-in-law Jerry, my mother, and my sister Kerry. Mom has a scooter that helps her get around now that she’s 90. Oh, wait, there were eight of us! I forgot to mention Mom and Kerry’s miniature schnauzer, Mojo, and Francine and Jerry one-eyed whatever-she-is, Triscuit. I guess she’s a mutt, because she isn’t a specific breed, but I say that affectionately, as I love her to pieces. She always goes wild when she sees me. Well, both dogs do, so how can you not love them?

The first thing we encountered once through the gates were about a dozen of the oddest-looking vehicles you will ever see. They were cobbled together from the corpses of many other vehicles, plus found objects and god-knows-what else. Things like stuffed bears and buzzards. I asked one of the owners and found out they are called “rat rods,” and I fell in love instantly. I love it when crazy people put all that much work and imagination into something totally impractical. At least some of them were street-legal, since we followed one into the airport before we knew what it was. Most of the others didn’t have license plates, so probably not. 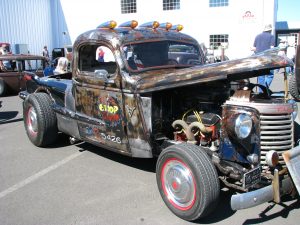 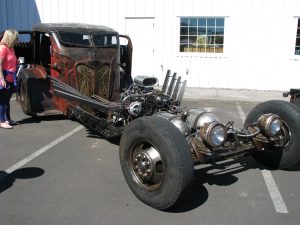 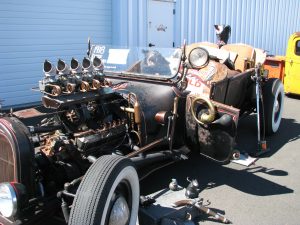 Then it was on to the main show. There were four rows of cars of all sorts. I admired almost all of them, but my favorites was a ’50 or ’51 bullet-nosed Studebaker customized to look like a shark-nosed P-40 Warhawk, the kind flown by Claire Chennault’s Flying Tigers. It was a genuine work of art. 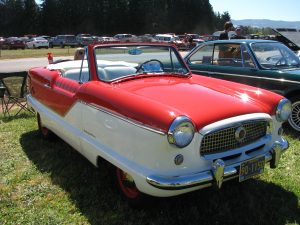 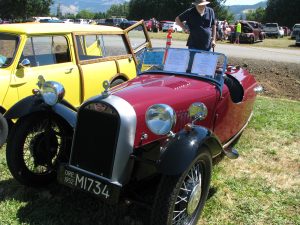 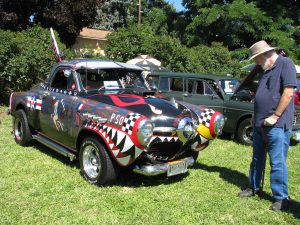 There’s no way I can name all the great automobiles there, but some favorites were a wine-colored ’57 T-bird; a real woody station wagon (I’m guessing a Chevy, but I’m not sure); a whole row of ’63 Ford Galaxie 500s; a Nash Metropolitan, another car I’ve always been partial to; a DeLorean DMC-12 an amazing Morgan three-wheeler; and maybe a hundred other cars, all worth looking at. 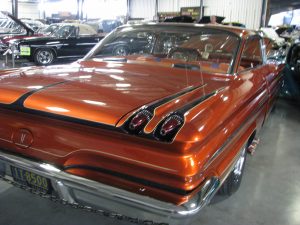 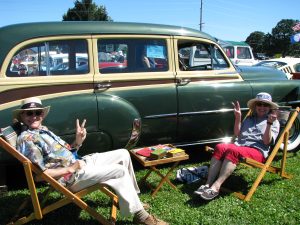 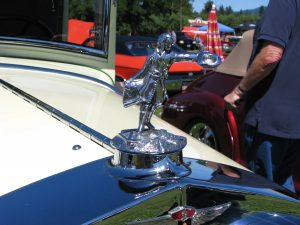 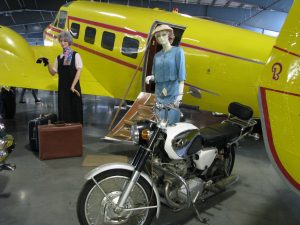 We moved on to the interior museum, which is quite large. There are 110 planes inside, all of the flyable except a few that are in the process of restoration. They were offering plane rides but they were pretty expensive. Also, though I love to fly in almost anything, several of those old crates looked pretty rickety to me, held together with bubble gum and baling wire. I’m not sure I’d go up in all of them. They had several Stearmans, a lot Curtis planes including the famous Jenny, and some very sporty and fast-looking Aeroncas. Mostly they were small to medium-sizes aircraft, the largest being a Beechcraft two-engine Model 18. Quite a few of the planes were made for racing. Others looked incredibly tiny. Wikipedia has a full list of their exhibits, with links to pictures of many of them.

In the automobile department there were 139 cars. They had a lot more Studebakers, an Avanti, a ’24 Hupmobile, a ’23 Locomobile, a ’29 Franklin, a couple of Thunderbirds, a slew of Model-Ts, and many more recent cars that could be called classic, though I hate to think of anything as a classic if it’s not even as old as I am. They also have a lot of motorcycles, which don’t interest me much. 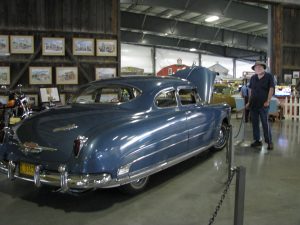 But the prize of the collection, in my eyes, at least, was a beautifully restored 1951 Hudson Hornet. It is the exact model that my family used to have. It’s even the same color, though ours was pretty faded by the sun by the time we got it. It was one of three Hudsons my father owned. He was a big fan of Hudsons, as was Steve McQueen, who had several of them. It’s largely forgotten these days, but in ’52, ’53, and ’54 Hudsons dominated the relatively new NASCAR circuit, winning 27 of 34 races one year. This was in the days when stock cars races were run by actual stock cars, not Fiberglas shells over custom-built frames and engines. When the Daytona 500 was actually run on the beach, on sand. Hudsons with straight-6 engines shut down all the cars that had V8 engines, something a lot of Ford and Chevy owners in Port Arthur learned to their considerable surprise when I left them in my smoke from a standing start at stop lights.

This car will always have a special place in my heart, because my father trusted me enough to let me drive it from Nederland, Texas, to New York City and back, a trip of about 3300 miles, for the World’s Fair in Flushing Meadow in 1964. My friend Phil Richey and I worked all summer to save up a few hundred dollars, and we saw every pavilion, living on Belgian waffles. It remains one of the best memories of my life. Old Blue gave us no trouble at all, though we burned through a case of motor oil supplied by my father. He bragged till his dying day about how everyone told him he was crazy to let a couple teenagers (actually, three, counting the car!) take a trip like that. We made the local newspaper!

They were offering free rides in various antique autos, driving around the runways and back, so I took them up on it. We got about a quarter mile from the museum building … and the Model T we were riding in broke down. We had to be rescued by a Pierce Arrow.

One of the other attractions of Hood River is a rather narrow two-lane toll bridge where you drive on a steel grating that constantly grabs at your tires and threatens to hurl you into the railing on the right or the oncoming traffic. For some reason, in our search for a Mexican restaurant we ended up crossing that bridge four times, Washington to Oregon, Oregon to Washington, etc. Cost us four dollars.

Out there on the water is as pretty a sight as you would ever hope to see. Windsurfing sails and parasails are all over the place, and they are all brightly colored. From a vantage point above, they look like a thousand little triangular paint chips racing back and forth across the water. If you approach the water from the land, it quickly becomes clear just how crowded the river is. There are people paddling around in a little sheltered bay, learning how to do it, I guess, and there are the old pros out there in the middle of the river slicing back and forth. I don’t know how they keep from running into each other. Maybe they don’t, but I didn’t see anyone collide. 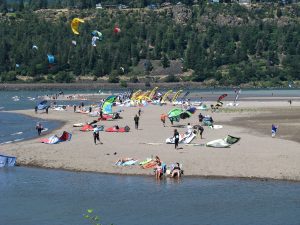 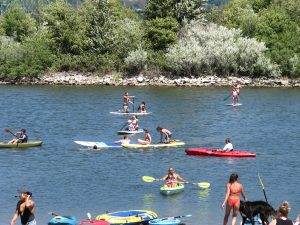 Even the shore is crowded with people and their equipment, and dozens of trailers and shacks selling sails and boards. It was a suitably breezy day down there on the water. There were whitecaps all over the place. It was early July, so the town could look forward to a couple more months of good weather before the Pacific Northwest winter clamped down clammily on us all.

No one knew it yet, but the Gorge in early September would also experience one of the worst wildfires ever at Eagle Creek, almost 50,000 acres burned, I-84 closed down, small towns evacuated … but that’s for another posting.