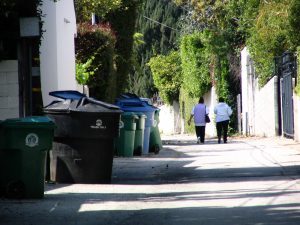 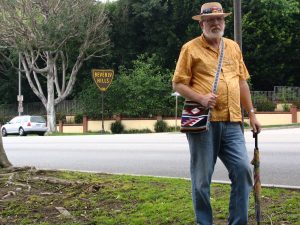 Alerted to its existence by a friend, last night we watched a video from a series called “Great Streets,” from PBS. This one was Randy Newman doing Sunset Boulevard. It was only an hour long, but of course he had access to some places we couldn’t get into, such as The Pink Palace, the old residence of Mickey Hargitay and Jayne Mansfield, with its heart-shaped pool. It was originally owned by Rudy Vallee, and until recently by Engelbert Humperdinck. It’s history now, torn down shortly after Randy Newman visited. Somebody paid $5,000,000 and tore it down. Such is life in Beverly Hills.

Randy cheated, he didn’t walk it as he had promised, but if you’re going to cheat, doing it in a cherry ’60s Chevy convertible is the way to go. Another thing he had was a research department, so we learned some things about the street’s history, and I noted a couple places I’d like to go back to. We’ll probably do that after we finish, at the sea.

But before that we ventured into the heart of darkest Beverly Hills, like Martin Sheen in search of Marlon Brando.

We parked across the street from the Beverly Hills Hotel, one of the fancy places I did not stay in during my movie industry days. Always wanted to; no one ever offered. But I did have lunch in the Polo Lounge on my first business trip to Tinseltown. More about that in a future episode. We started walking along Sunset, back toward West Hollywood.

First thing you notice: Walls. Second thing you notice: More walls. Walls and walls and walls … and then an alleyway, neatly lined with big trash cans. Wasn’t Nick Nolte rummaging in one in the opening scenes of Down and Out in Beverly Hills? Probably a very nice class of rubbish back there. Before long you realize that back alleys is pretty much all you’re going to see. 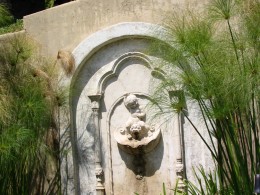 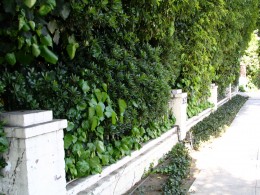 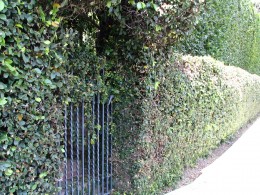 When I say walls, it’s an oversimplification. Usually there is a hedge, from 8 to 20 or more feet high. Behind that will be a concrete block wall. Sometimes it’s an ivy-covered wall. One place had a giant hedge, a cyclone fence, and a board fence atop a concrete block wall, all posted with signs reading “Bel Air Patrol. Armed Response.” I figure if the ravening, furious, hungry proletariat come with tanks these people will be fucked. Otherwise, they’re ready for anything. 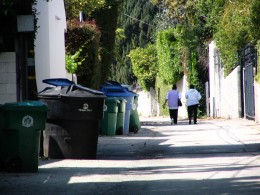 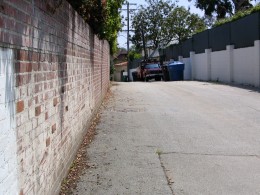 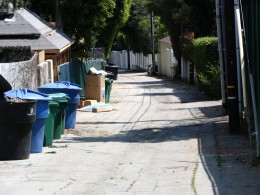 You don’t realize it so much, driving through. You see a lot of greenery, huge iron gates, and here and there a glimpse of a gigantic pile of stone that someone is living in. You zip on by, soon you’re in Pacific Palisades or going by UCLA. But when you walk it you are soon overwhelmed by the vast, cold, snotty isolation of it all. These people have walled themselves in, and walled you out. You are riff-raff, to be channeled through the neighborhood as quickly as possible, seeing as little as possible. 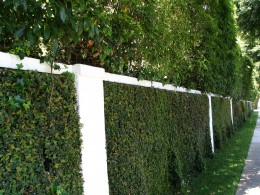 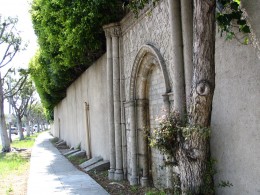 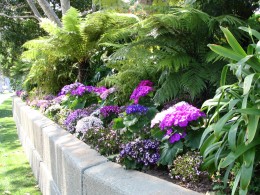 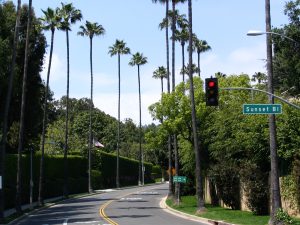 Because you don’t see anything. Even the gates, even the stout iron barred fences are now all fitted with green canvas laced up tight. Sure, I understand the need for privacy. Some of these people are famous, and would be pestered to death without their walls. Even the bland, ordinary millionaires don’t want hordes of people standing around gawking at their mansions. Neither would I, if I lived here. But the funny thing … the side streets, the broad, gently winding avenues of BH aren’t like this. They are open, mostly, and many don’t have a fence of any kind. But then, nobody is driving by, either. These streets aren’t on the way to anything. There is no hustle and flow here, as there is on Sunset. I get the feeling that, if possible, the neighborhood would like to put Sunset in a tunnel so the residents wouldn’t have to even think about the endless stream of just any old types of junky cars that daily invade their leafy nirvana. 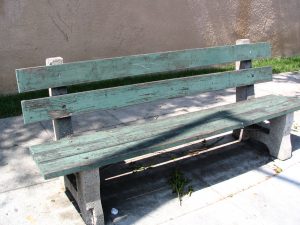 I can prove they feel that way about busses. We walked a mile out and a mile back. There was a bus stop at the beginning, and one at the end. One mile between bus stops. Think about that. The only people on those busses are either just passing through, in which case they love it because they move faster … or they have jobs here. Maids, mostly, because gardeners have to have trucks for their stuff. So they begin their day with a half a mile walk to the street where their employer lives, and there’s a good chance that could be a mile or more up a very steep hill.

Lee told me this story Bill Maher related. He admits he’s rich, doesn’t apologize for it (and why should he? He earned it), lives in a great place, has help. Every morning he sees these mostly Hispanic women trudging through the hills where he lives. He says he often stops and picks them up, gives them a ride. He sometimes asks them if anyone else ever picks them up. 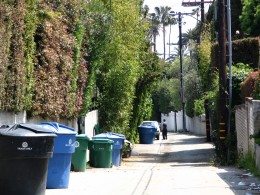 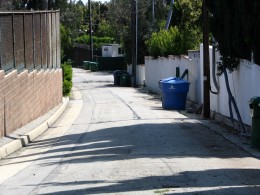 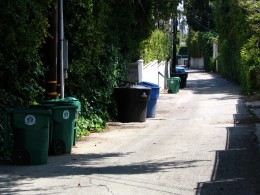 No, never. Just isn’t done, old sport. Mustn’t spoil them. One woman actually told her maid that she was happy for her, getting all that free cardiovascular exercise. The mind reels. This is certainly a bitch who pays a lot of money at a gym or, more likely, for a personal trainer … to get the stuff this fortunate illegal Mexican woman is getting for free! What could be more liberal than that? 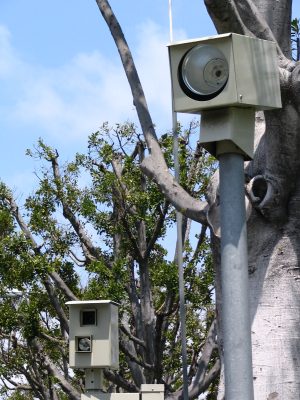 I have sat on a lot of bus benches during our Sunset trek, resting my feet, and I must tell you that the two in Beverly Hills are the grungiest I’ve ever seen. They look like they were dumped there in 1922 and promptly forgotten. This is a town that can afford video cameras monitoring every traffic light on the Boulevard, but won’t paint a bus bench. There is no shelter. Probably because it doesn’t rain much here, and a little fresh air and rain never hurt anybody, anyway. Especially people who grew up working in the fields. They probably enjoy getting wet, like a nice refreshing dip in the pool …

So what I am saying here? What am I, a friggin’ communist?

No. Been there, done that, bought the T-shirt, threw it away. It just didn’t work, and it never will.

But this isn’t working, either. During our hour-and-a-half walk though BH these people got a little richer than you did, pulled a little more ahead of you. (I exclude any multi-millionaires among my readers, if there are such.) During the last year they pulled a lot ahead of you, and during the four years before that … well, they’re so far ahead of you by now you can’t even see their dust. And they have every expectation of doing even better in the years to come. The rich are getting richer, the poor are getting poorer, the gap is widening. 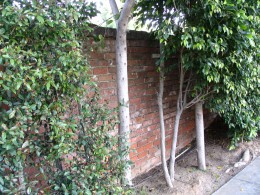 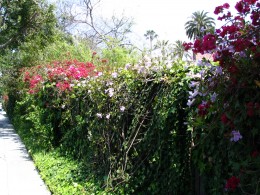 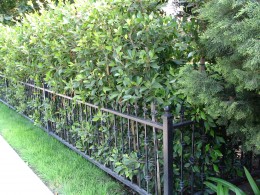 So I hate rich people, right? No, not all of them, any more than I hate all lawyers (though I admit I can get a bit bombastic on both subjects.) Some people were born rich. Can’t blame them for that. Many earned their wealth doing nothing with even a hint of moral taint to it, and never asked for or lobbied for or paid for the incredibly inequitable tax breaks they benefit from.

But there are others who, if they are Christians, would do well to remember what Jesus had to say about rich people, camels, and the eyes of needles. (Matthew 19:24)

And if there is a heaven, I’d like to be able to stand beside the Pearly Gates for just a little while (waiting for my bus taking me somewhere else), and see the baffled expressions on the faces of a lot of people from zip code 90210 as St. Peter’s valet parking staff tells them they’ll have to drive their own Rolls-Royces through an entrance … only wide enough for a camel.