The Shrub That Ate a House 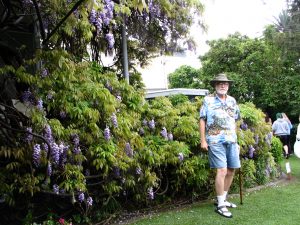 The sleepy little town of Sierra Madre is off the beaten trail, wedged as it is between Arcadia, Monrovia, and Pasadena, at the foothills of the San Gabriel Mountains. But not so very long ago it was at the center of a struggle for the very survival of humanity. I detailed this story a while back in my review of the four movie versions of Jack Finney’s book The Body Snatchers. You may recall in the first movie Dr. Miles Bennell managed to get the word out to the larger world just in the nick of time, but unfortunately lost his girlfriend, Becky, to the evil creatures. What actually happened, as told in the book, was that Miles and Becky burned the field where the pods were being grown. With no new pods, the pod people had to give up their plans of world conquest, and lived alongside the real people. They couldn’t reproduce sexually, so Miles assumed that one day they’d all be gone.

There are very few pod people still living in Sierra Madre now, and they’re all pretty old. You can see them, sitting on park benches, staring vacantly into space, perhaps dreaming of the days when they ran this town. Nobody pays them any mind. They’re yesterday’s news. One by one they die, dry up, and blow away.

Now the only reason to visit Sierra Madre is the yearly Wistaria Festival, which was held a few days ago, March 30th. The reason for this gathering is so people can see and marvel at one of the Seven Wonders of the Horticultural World, the world’s largest flowering plant, which the locals simply call “The Vine.”

(Incidentally, I couldn’t find any site where these seven wonders were actually listed, or any agency that sponsored such a list, or how it had been determined, but many articles talking about The Vine mention that it is on the list. It’s possible that the list was made up by the Sierra Madre Chamber of Commerce. So, with that caveat, these are the other six that are supposedly Wonders:

I think you’ll agree that’s quite some company to be in … and it makes me even more suspicious. I mean, all the others are huge. Two are entire ecological regions, and the other four are extensive gardens. The Vine is damn big, but nothing like that.)

The claim to being the world’s largest flowering plant is bona fide, though, confirmed by Guinness in the 1990s. It is also true that it is visited by botanists and such from all over the world. It is true that it is 114 years old, planted in 1894 from a seedling that cost 75 cents. It covers about an acre and a half, and is said to weigh 250 tons, though how they arrived at that figure is unknown to me.

A brief history of The Vine: 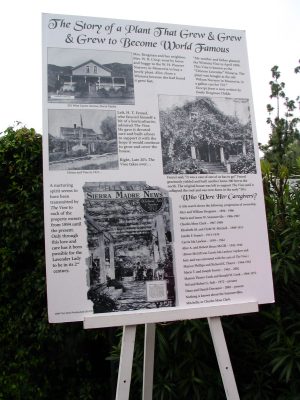 It was originally owned by William and Alice Brugman. By 1918 it had already grown so large that Sierra Madre held its first Wistaria Festival, which attracted 12,000 people. It sprawled over a lot of arbors, and up the side of the Brugman’s farmhouse until, in 1930, the weight of it collapsed the roof. That house was torn down and a new one was built a little distance away, and the plant hasn’t been allowed to eat any more structures. Though, since it can grow 26 inches in 48 hours, you don’t dare turn your back on it. In the ‘30s the Wistaria Festival sometimes ran for six weeks.

The property changed hands several times and now The Vine is owned by two families. Naturally, they don’t want awed gardeners from all over the world tramping around their backyards, since they live there, so the Festival has now shrunk to just one day per year. We first heard about it from our old PBS friend Huell Howser, whose series “California’s Gold” travels to places both famous and obscure in the Golden State and reports (with a lot of genuine gosh-wow enthusiasm) on what he finds there. I found out the date for the 2008 Festival, and we bought tickets for the bus ride from the center of town, up to The Vine, which is about a mile away. 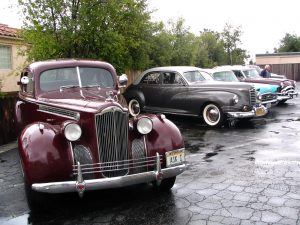 March 30th dawned overcast and misty. We took off on the almost deserted Sunday freeways, hoping it wouldn’t rain. We parked a short distance away and headed toward downtown. On the way we encountered an interesting thing that seemed to have no connection to the Festival. It was a small parking lot where the local Packard Collectors club had gathered with their automotive treasures. There were enough cars there so you could trace much of Packard’s devolution from the best-selling luxury car of the 1930s to the uninspired styling of the early ‘50s, and the simply awful monster of 1956, just before it merged with Studebaker and produced an even worse car, basically a Studebaker with the Packard name on it, and final extinction in 1958. 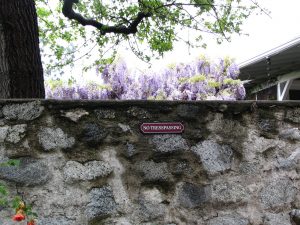 It started to rain lightly as we reached the main street, which was lined with booths selling beautiful stuff that I’ve got no use for. We were able to get on the rather luxurious bus fairly soon, and by the time we got off, the rain had stopped, never to return. It stayed pretty cool all day, though, cool for this area being about 55 degrees. We lined up along a stone wall surrounding the property, on which a professionally-lettered, discrete little sign advised us that there was “No Tresspassing.” 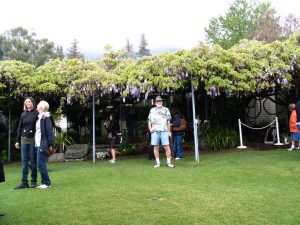 This is an experience that I’m afraid neither words nor pictures can really do justice to. I can say that it was big. Lee can show you pictures of parts of it. But the only way to see it all and really appreciate it would be either from a helicopter, or walking down the hill underneath it yourself, as we were doing. The monster is held up by a vast network of heavy steel pipes, and here and there it sets down a “trunk.” One of the docents told us that’s how wistaria grows, and that these trunks we were seeing up here were some of the newer ones. The “mother plant” was down the hill. I think there were a dozen or more of these subsidiary plants, and of course the wistaria is a vine, and entwines so thickly that I would be unable to tell it was all one plant, grown from one source, rather than a series of them all mixed up with each other, if I hadn’t been told so. But it’s well-documented. There is a good history of this organism. It has provenance.

Underneath, it’s not very pretty. Bare, twisted branches, tangles of twisted vines everywhere you look, and a deep gloom on this overcast day. Even on a bright day I doubt much light gets through the canopy. The pretty part is when you’re standing outside the edges and looking back up the hill. Most of the heavy flowering was happening uphill, as we entered under The Vine. Down at the bottom it looked as if it hadn’t come into full bloom yet. 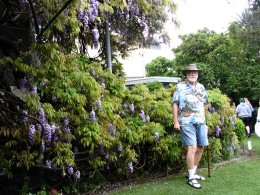 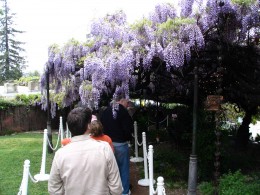 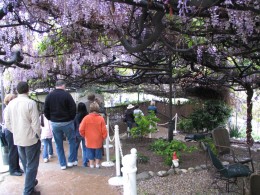 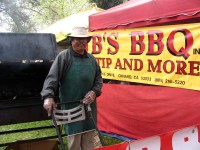 Well, you can only stare at the Seventh Wonder of the Horticultural World for a certain amount of time … or we can, anyway. I’d say we spent about half an hour there. Then it was aboard the bus and down the hill again to the commercial part of the Festival. There were a lot of food tents set up in the park. We got a tri-tip BBQ sandwich and started strolling down the street looking at all the stuff for sale. 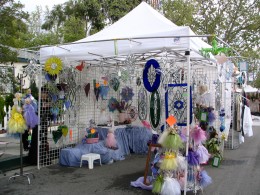 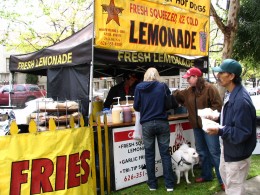 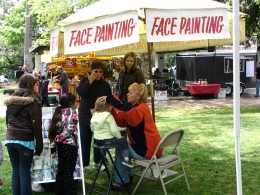 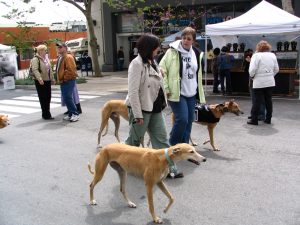 What we quickly noticed was that the citizens of Sierra Madre and the visitors to the Festival were heavily into dogs. Dogs everywhere you looked, and all of them well-behaved, too, except for one yapper. There was an unusual number of greyhounds, at least a dozen of them. These are not animals that are high on most people’s list of desirable dogs, being high-strung, easily chilled, and so damn skinny-looking. Turns out this is a hotbed of the greyhound rescue movement, which seeks to save dogs whose racing career is over … and those careers tend to be short, sometimes only weeks if they don’t produce some wins pretty quickly. Then, unless they were big winners and kept for breeding, they are usually put down. We listened to a woman tell some of the horror stories about it. It’s sad, but not enough for me to want to adopt a full-grown greyhound. Lee said she’d heard that racing greyhounds aren’t housebroken, for one thing. 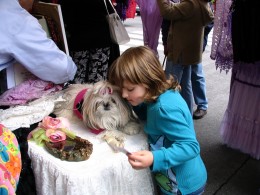 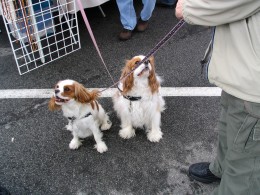 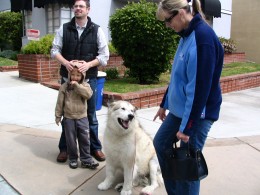 We saw Schipperkes and Schnauzers, Shih Tzus, a pair of Shelties, and a pair of Cavalier King Charles Spaniels. I think our favorite was a 9-year-old Malamute named Tina. She was extremely well-behaved and trained, and liked to be petted by everybody who came along. One of her hind legs was shaved, and her owner told us she’d just gotten a new knee joint. Well … jeez. I have to say I was a little nonplused. I mean, she can afford new knees for her dog, and I can’t afford them for myself. Of course, dog surgery is much less expensive than human surgery, but still. We are one hell of an affluent society, aren’t we? Too bad more of it hasn’t rubbed off on me. 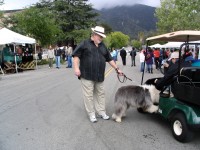 The last canine we saw on our way out was an Old English Sheepdog that was another slut for attention, and seemed determined to get aboard a golf cart that went by. He liked golf carts because he often got to go places in them.

Another fine day in the Southland. About all we could have wished for was sunny skies, but you can’t have everything. Lee says Portland got a light dusting of snow a few days ago. No, thank you!