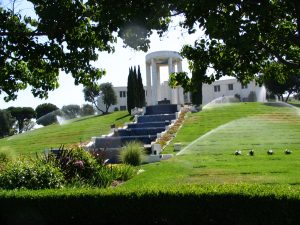 It’s been a while since we went on a celebrity body hunt, so when other business called us down to the lower reaches of Culver City, we decided to visit this graveyard, which is rich in famous bones. It’s also a Jewish cemetery, like Mount Sinai, which always affords a few surprises. Several times in our quest we will look at each other and say “I didn’t know he/she was Jewish!”

Hillside is fairly small, maybe a couple of large city blocks, and completely dominated by a memorial that would make some of the early Pharaohs jealous (though Khufu would probably sneer at it). This is the tomb of Al Jolson. We had thought the Douglas Fairbanks, father and son, at Hollywood Forever, was grandiose. It’s nothing compared to this one. At the top of the hill, in front of the main mortuary, is the tomb itself, a big black marble thing under a high dome. On the underside of the dome is a mosaic of Moses. (Huh! A mosaic of Moses. How odd!) He’s receiving the Ten Commandments. Or possibly it’s God giving them. Moses, God … who can tell? There are two inscriptions around the inside rim of the dome. One says THE SWEET SINGER OF ISRAEL. The other, Lee didn’t get a picture of, but it’s similarly egotistical. Off to one side is a small statue of Jolson in his characteristic pose, asking his Mammy to sing him a Dixie melody. You can’t tell if he’s in blackface, I’m happy to say. Thankfully, the sculptor didn’t give him big white eyes and bulging red lips. It’s hard to believe that kind of racist shit was popular less than a century ago, isn’t it? 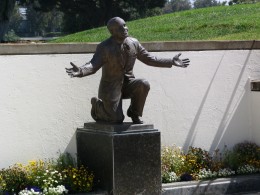 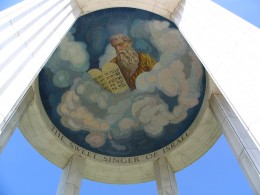 The Sweet Singer of Israel 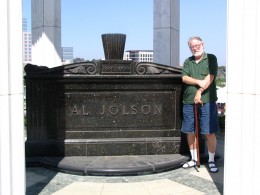 But that all pales against the real attraction here, which is the fountain. Fountain? Hell, it’s a cascade, a roaring Niagara. No less than five waterfalls splash and gurgle through white concrete, lined by blooming flowers. I have to say it’s gorgeous … and maybe a wee bit vainglorious? I wonder who designed this. Jolson himself? 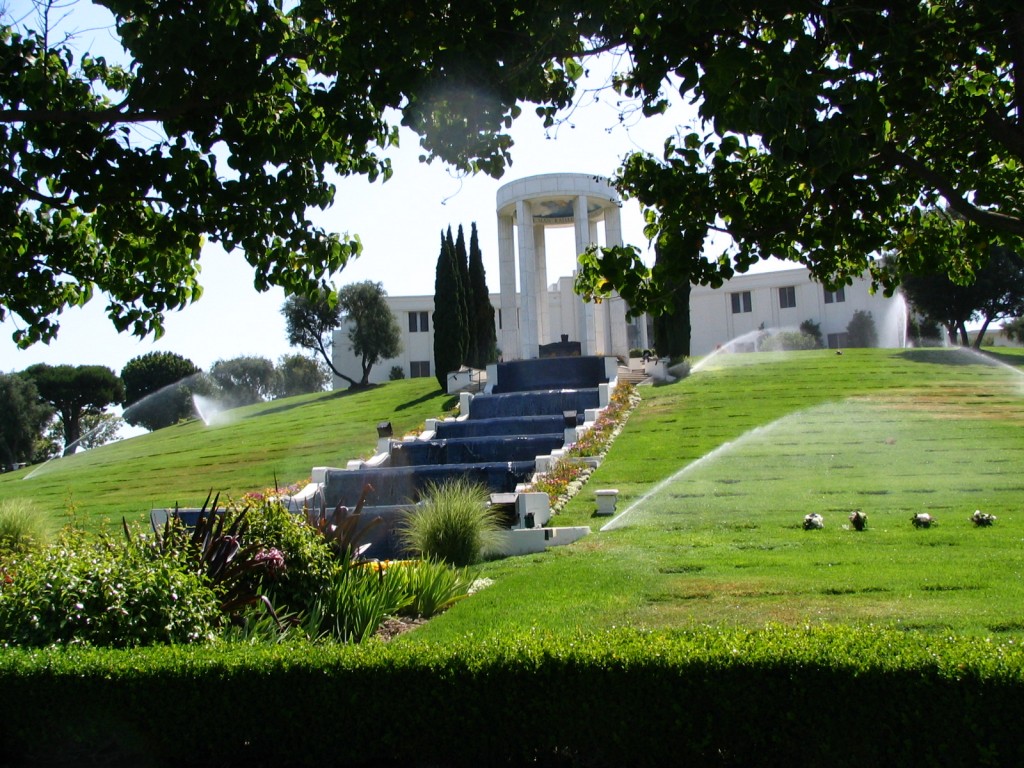 The mausoleum behind him is crammed with famous people. The first we found was Mark Goodson. If you’re old enough you might remember when he and his partner dominated daytime television, in the form of cheap-to-produce quiz shows. They started way back in 1948, and I remember from my childhood hearing the name at the end of the show: “A Mark Goodson, Bill Todman Production.” Some of their more successful efforts include Beat the Clock, Family Feud, Match Game, Password, The Price Is Right, To Tell the Truth and I’ve Got a Secret. Some of those are still running! I remember in 1965 being shanghaied by pages in Rockefeller Center and herded into the studio audience of To Tell the Truth. I was thrilled! Goodson’s name is inscribed inside rectangle shaped like a television screen on his tomb. 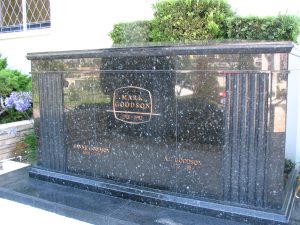 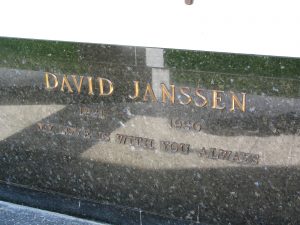 David Janssen: My Love Is With You Always

Next was David Janssen. Hey, Lieutenant Gerard! You wanna know where Dr. Richard Kimble is? I can tell you, for a small price. Trust me, he ain’t going anywhere. 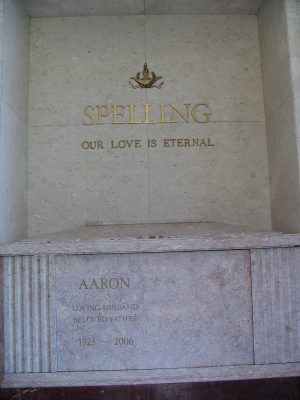 Aaron Spelling: Our Love Is Eternal

Not far away was Aaron Spelling, according to Wikipedia the most prolific television producer of all time. Charlie’s Angels, Dynasty, Starsky and Hutch, Family, The Rookies, Beverly Hills 90210, Burke’s Law, Honey West, The Mod Squad, and S.W.A.T., among others. Quite a list, and some were actually good. I can forgive him for the rest, but not for producing daughter Tori.

Around the corner is George Jessel, the “Toastmaster General,” as it proclaims on his plaque. I confess I don’t know much about this old vaudevillian, except I remember him appearing frequently on the Carson show in the ‘60s, defending the Viet Nam war and condemning hippies, so he’s no friend of mine. He struck me as a pompous windbag. He wasn’t very windy on the day we visited, however. Death will do that to you. 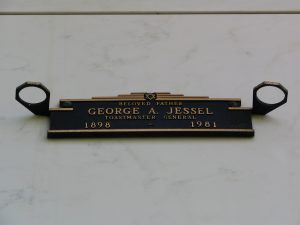 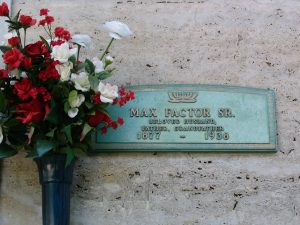 The Max Factor family is here. He was born Factorowitz in Poland when it was part of the Russian Empire. Dude came a long way from Łódź to Hollywood, didn’t he? 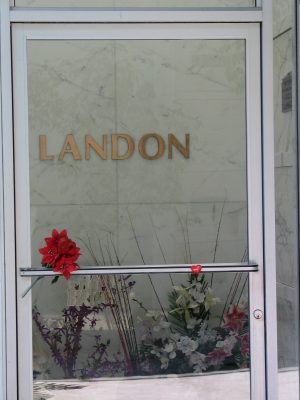 Very close to the Factors is the tomb of Michael Landon. (“I didn’t know he was …”) It’s very odd. It’s a small, cold-looking cubicle with a glass door that was locked. Flowers had been left outside, and there were a lot more inside, plus pictures and a teddy bear. It’s actually a very tacky-looking installation. The door … well, it looks like you could go through it to buy a quart of Four Roses and a lottery ticket. Ugh!

Much nicer is the tomb of Jack and Mary Benny (born Benjamin Kubelsky), who was always one of my favorite comedians. He could get more laughs just standing there and looking put-upon than many lesser comics who shout and jump around the stage. I never missed his television show, and have listened to many of his radio shows on tape. 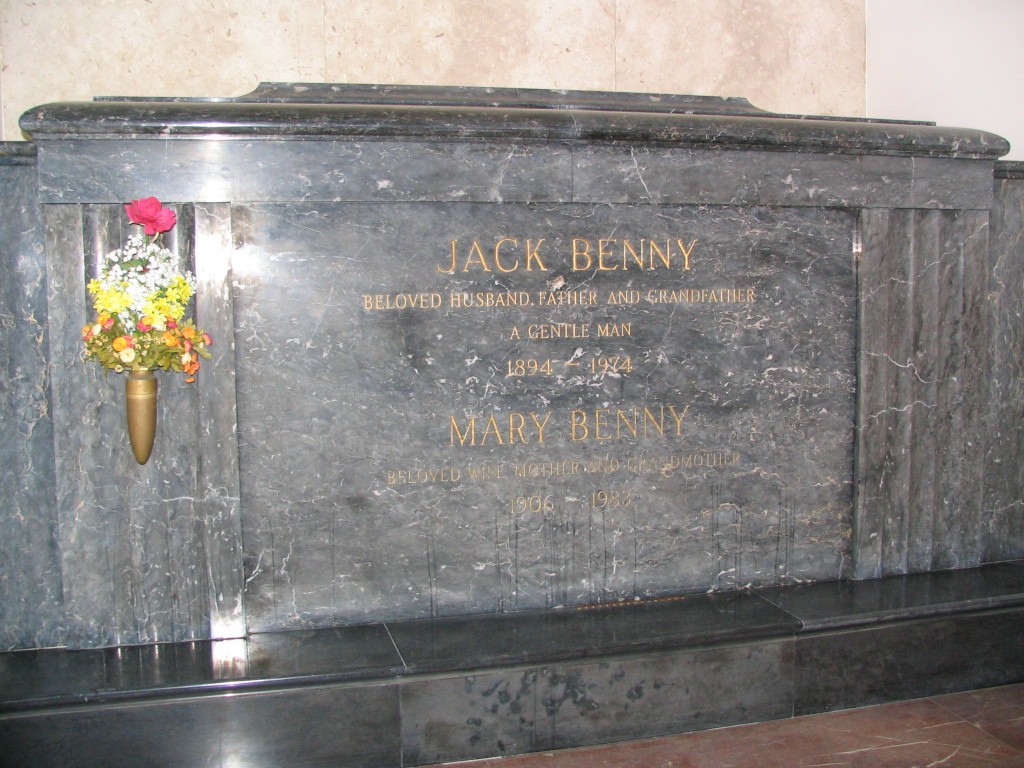 Eddie “Banjo Eyes” Cantor was before my time, and I don’t think his movies have aged as well as some. His birth name was Israel Iskowitz. You really didn’t dare have a really Jewish name back then, did you? Even if everybody knew you were a Jew, you weren’t hiding anything. One of our most beloved and prolific and talented songwriters felt he had to change his Hebrew moniker. Do you recognize the name Israel Isidore Beilin?* 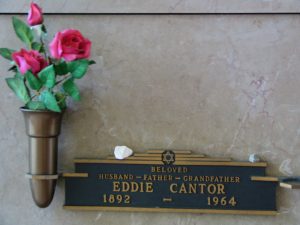 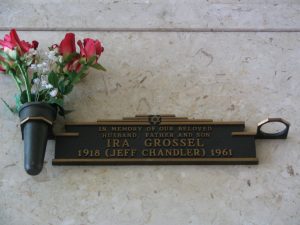 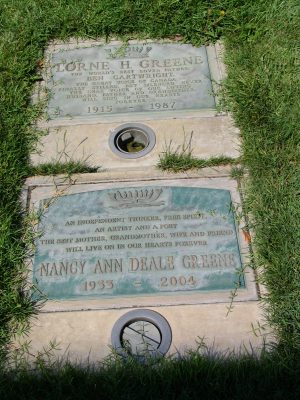 Another example of name changes: That manly hunk of beefcake, Ira Grossel. Doesn’t sound familiar? Try Jeff Chandler. (“I didn’t know …”) He died of botched spinal disc surgery, and his family got a large settlement.

Moving outside, there are several stars buried in the ground, with small markers. They are much harder to find than the ones inside. We found Lorne Greene and Shelley Winters (after a long search). Tom Poston is buried in front of the mausoleum, and so is his recently-deceased wife, Susanne Pleshette, who doesn’t even have a tombstone yet. We attended her Hollywood Boulevard star ceremony, which she didn’t quite survive long enough to attend herself. She seems to be buried with her parents, Geraldine and Eugene: “Lovers.” Sweet. 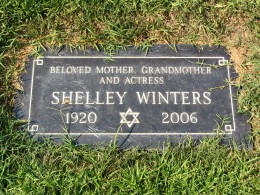 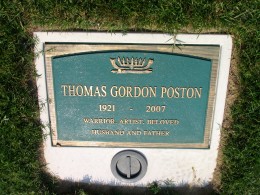 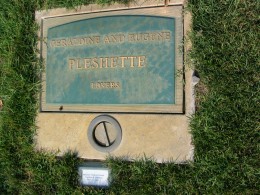 Vic Morrow, father of Jennifer Jason Leigh, is also in the ground … or at least I assume most of him is. The nature of his death probably precluded recovering all the remains. The story was that he was decapitated, but when a helicopter blade hits you, it’s going to be a lot messier than that. You may recall he was killed by a falling helicopter, along with two Vietnamese children, while filming Twilight Zone: The Movie. John Landis and some crew members were found not guilty of manslaughter and child endangerment, despite the fact that there was much testimony that Landis had been warned about the proximity to the chopper and explosives, and that he was clearly violating child labor laws by working the children late at night. The only good to come out of it was that movie crews are much more careful around helicopters now. 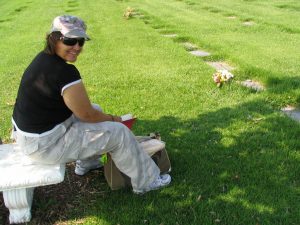 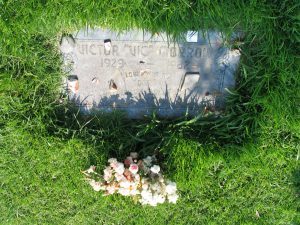 There was a young woman sitting on a bench under a tree by Morrow’s grave. She had put some flowers on it. It turned out that she was from Adelaide, Australia, and one of her fondest memories of her father was watching Vic in Combat! with him when she was young.

There are outdoor mausoleums, too, and there we found Milton “Mr. Television” Berle, Dinah Shore (“Loved by all who knew her and millions who never did”), and trashy novelist Irving Wallace. 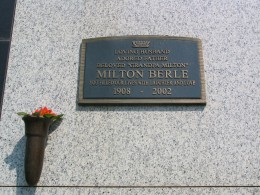 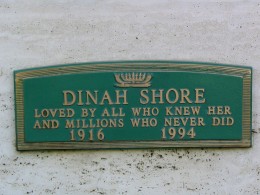 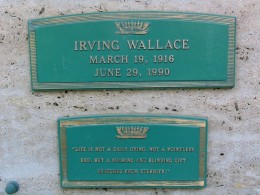 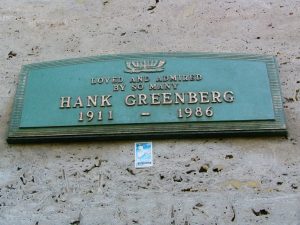 Then there was “Hammerin’ Hank” Greenburg, probably the first major Jewish sports star. I looked into his story, and found that in 1934 he refused to play on Rosh Hashanah. Lots of complaining from Detroit fans: “Rosh Hashanah comes every year but the Tigers haven’t won the pennant since 1909.” He talked it over with his rabbi, who said it would be okay, but he refused to play on Yom Kippur, the Day of Atonement. More complaining, but Hank held fast. It moved Edgar Guest to write a poem I like a lot, “Speaking of Greenburg,” Quoted here from Greenburg’s bio at the International Jewish Sports Hall of Fame (yes, there is such an organization!):

The Irish didn’t like it when they heard of Greenberg’s fame
For they thought a good first baseman should possess an Irish name;
And the Murphys and Mulrooneys said they never dreamed they’d see
A Jewish boy from Bronxville out where Casey used to be.
In the early days of April not a Dugan tipped his hat
Or prayed to see a “double” when Hank Greenberg came to bat.

In July the Irish wondered where he’d ever learned to play.
“He makes me think of Casey!” Old Man Murphy dared to say;
And with fifty-seven doubles and a score of homers made
The respect they had for Greenberg was being openly displayed.
But on the Jewish New Year when Hank Greenberg came to bat
And made two home runs off Pitcher Rhodes—they cheered like mad for that.

Came Yom Kippur—holy fast day world-wide over to the Jew—
And Hank Greenberg to his teaching and the old tradition true
Spent the day among his people and he didn’t come to play.
Said Murphy to Mulrooney, “We shall lose the game today!
We shall miss him on the infield and shall miss him at the bat,
But he’s true to his religion—and I honor him for that! 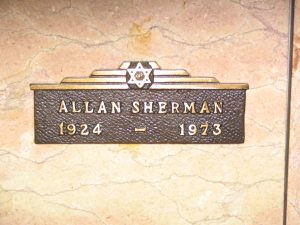 There’s not a lot of cremains here, and we wondered if there was something in the Jewish religion that frowns on cremation. But there were some, so even though it may not be popular, apparently is isn’t forbidden. The only celebrity we found whose ashes are here was Allan Sherman. Remember him? “Hello muddah, hello faddah. Here I am at Camp Grenada.”

Elsewhere was Isadore “Friz” Freleng and his wife Lily. He was one of the crazy guys, along with other geniuses like Robert McKimson, Chuck Jones, Tex Avery, and Bob Clampett at Termite Terrace during the heyday of Warner Brothers animation, of Merrie Melodies and Looney Tunes. I wondered if there was a difference between the two, and apparently after 1944, there wasn’t. Except that the theme for Looney Tunes was “The Merry-Go-Round Broke Down,” and Merrie Melodies opened with “Merrily We Roll Along.” Below Friz’s plaque is another with eight of the cartoon characters he helped bring to life. 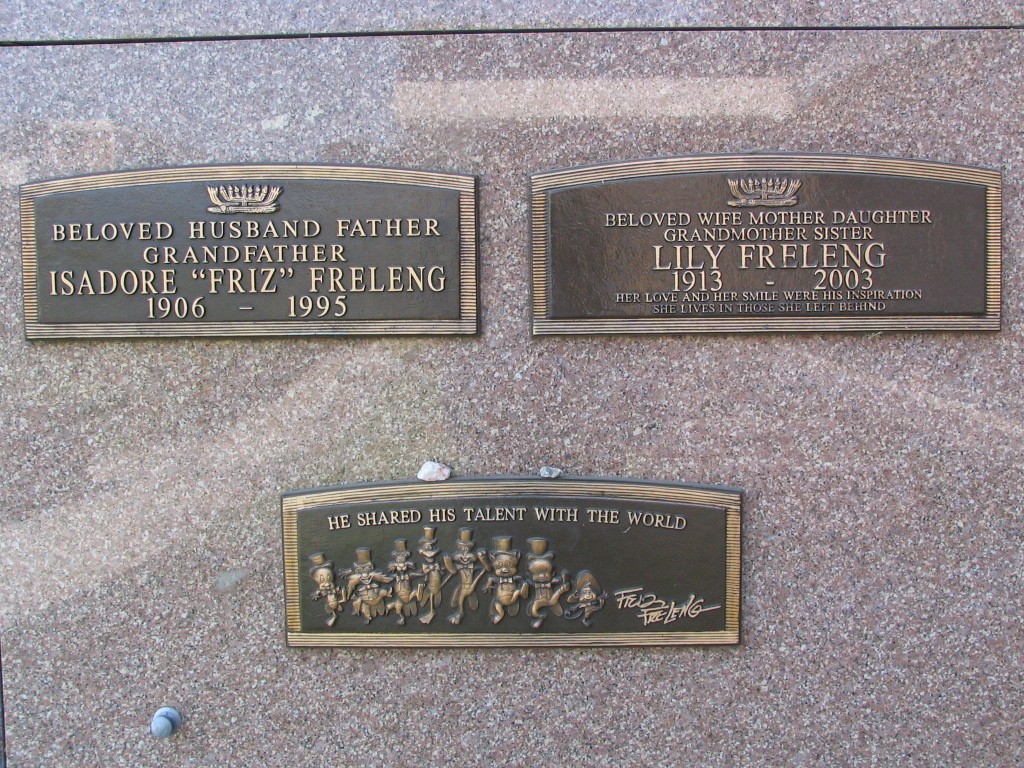 Then there’s Jan Murray (Murray Janofsky), a once-popular comedian that I barely remember. I love his epitaph, though. 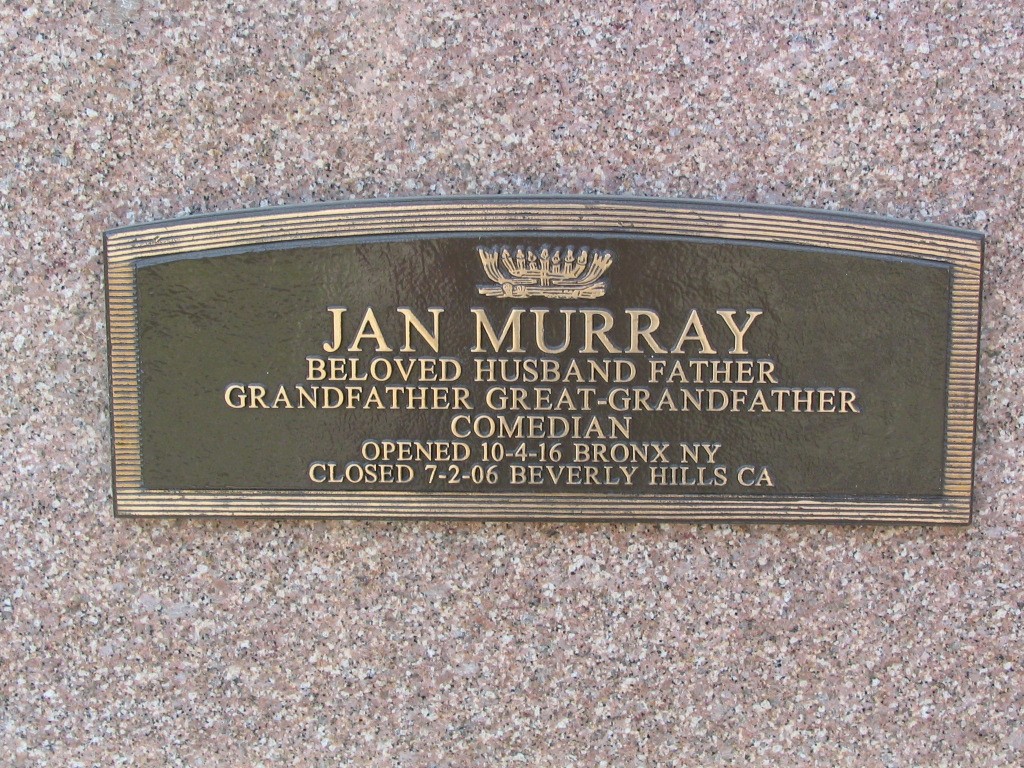 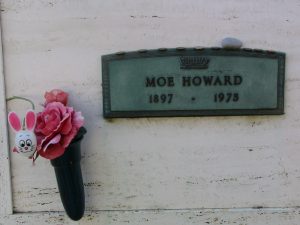 The day was getting late, but there were still two interesting stiffs to find. They were in a sort of rat maze near the entrance. The website warned us that it was hard to find the right little niche in here, and they weren’t kidding. But eventually we found gangster Mickey Cohen, and Stooge Moe Howard, who was probably responsible for more kids putting their eyes out than all the BB guns ever sold. I was never a Stooges fan, but I watched them, and though all the head-bopping and such hijinks didn’t bother me, every time they did that eye-boinking thing I winced. I understand the Stooges themselves sort of wished they’d never come up with it, as all of them were injured at one time or another when the stunt went wrong. But the fans had come to expect it.

And that’s it for Hillside!