The Ides of March in Hollyweird 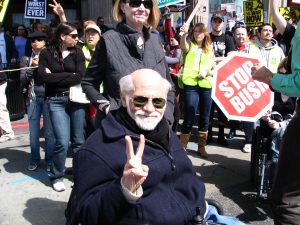 The day begins with a walk from our apartment to the corner of Hollywood and Vine, where the usual suspects are assembling for yet another futile anti-war march. I’m sorry, I just can’t get enthused anymore, we’ve been to too many of them, and it’s the same faces, the same several thousand people. (Okay, this time there was a pretty lively group of Clowns for Peace, and Ron Kovic was there, but still.) Middle America is not turning out for these things, no matter how many of them are opposed to the war in theory. I think they see these marches as useless displays of ego on the part of the (mostly) weirdoes who attend them … and who’s to say they’re wrong? The only effective thing most people can actually do is vote to throw the war criminals out in November, and hope that the Democratic White House (Clinton or Obama, I don’t much care) and Democratic Congress will have the balls to prosecute these abominations in ’09 … but you know they won’t. No fucking guts. Man, if the shoe’s on the other foot? The Republicans would already have manufactured 1000 criminal charges. I’ll give them that, they know how to fight dirty. It’s about time we learned how. 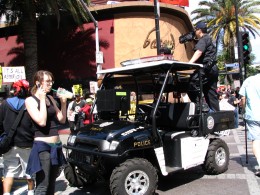 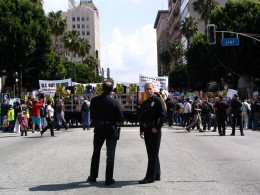 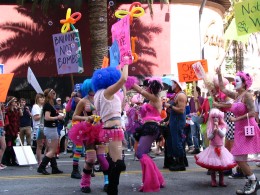 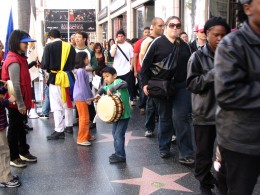 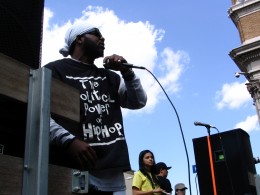 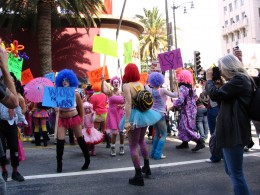 There was another protest happening down on Sunset, and that was the Internet commandos known as Anonymous picketing the Scientology headquarters at Sunset and L. Ron Hubbard Avenue. (Believe it, my friends, they named a whole street after him.) Hubbard’s birthday was the 13th, and the Dianetics folks threw a big party. Anonymous hoped to spoil their week.

I am not going to express any opinions about Scientology, Hubbard, Tom Cruise, or anything else like there here. Why? Because I’m chickenshit, that’s why. I don’t need any lawsuits, and everyone knows these people will file one at the hint of a discouraging word, and they have the money to drive you bankrupt defending yourself. That’s the whole power of Anonymous, nobody knows who they are, so they can’t be attacked. Any of you who have read anything here at this website will instinctively know where I stand on all that. So I will just be a reporter, and tell you what I saw and heard. Pretend you’re reading the LA Times.

(Interesting though, isn’t it, that I have no hesitation at all in calling the President of the United States a war criminal, but have to opt out of criticizing a church? That says something about them right there.) 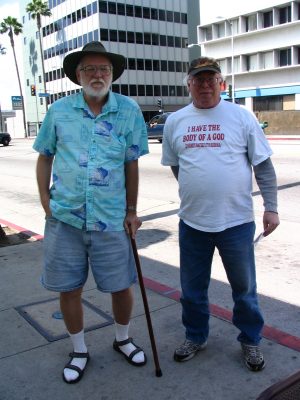 Lee decided to walk the two miles from Vine to Vermont, but I took the train. When I got aboard at the Hollywood and Vine station I was facing a guy who said “You’re John Varley.” Well, this doesn’t happen to me every day, friends and neighbors. In fact, outside of SF conventions, it hardly ever happens. I admitted that, yes, I was that worthy but befuddled gentleman, and he said he had read all my books, loved them, was a regular visitor to this website. The day was looking up. His name was Jim Wilson and he was from Eugene, Oregon, of all places, and had come down here for a rock concert. We traveled together to the Scientology headquarters and looked around and waited for Lee, who straggled up a bit later, saying she hadn’t realized just how far two miles can be.

(Addendum, 5/25/15. Several years ago I got an email from a young woman in Eugene who said she was Jim Wilson’s daughter. The guy had wanted to be a writer all his life, had never sold anything, and it seems that meeting me was a high point in his life. He had a lot of low points, though, and during one of them he got into the bathtub and blew his brains out, leaving his carcass for his daughter to find. I hate him for that. Jump off a high cliff, take poison, drown yourself, but make it so your loved ones don’t have to look at a mess like that.)

I’d say there were four or five hundred people there, about half of them in Guy Fawkes masks or with their faces otherwise covered. Reporters were doing stand-ups, and a thin blue line of Scientologists were guarding the entrance to L. Ron Hubbard Avenue (which is only about a block long). They looked a little baffled. I wondered what that must be like, to see so many people who at the very least heartily dislike you, and possibly even hate you. I don’t want to find out.

Because the feeling seemed to be pretty much unanimous. There is a traffic light at the corner, and every time it changed and cars began to move, there was a chorus of honking horns. At least half of the people who drove by felt strongly enough about Scientology to blow their horn, flash the V-sign, give a thumbs up. Probably more than half. Most of the rest were looking puzzled. What the fuck is this? 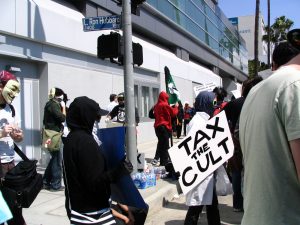 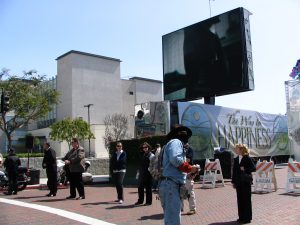 I talked for a while with a guy in a Guy Fawkes mask who said his name was Anonymous … hmmm. Coincidence? I wanted to know where he got his mask. He said he’d gotten the very last one from a costume shop. He said the story was that when the Scientologists found out Anonymous was wearing these things (which are from the movie V for Vendetta), they went all over Los Angeles and bought every one of them. Sounds weird, but they are known for tactics like that. This was not a very smart move, though, as the rights are owned by Warner Bros., the masks are copyrighted or trademarked, or whatever you do with a graphic design. They will have no trouble at all churning out a million more, which they will certainly do if there’s a demand for them. Seeing this demonstration, I think there might be.

You gotta wonder what the reaction will be. Scientology has been trying to knock down every critical video posted on YouTube, but it’s a losing game of Whack-A-Mole. You hit one, and two more pop up. Internet freaks really, really, really don’t like any attempt to censor content. Might as well shovel the tide with a fork.

You think they’ll get defensive? Not if they follow Hubbard’s teachings. “Never defend, always attack,” he said. Fact. You can check it, and the Scientologists don’t deny it. It’ll be interesting to see what the next move is in the first large-scale attempt at social activism via the Internet.