We met Bob pretty much at the same time we moved into the apartment over the Monte Carlo. He seemed to always be around, this little guy with short blonde hair and thick glasses. He always said hello, and he was usually smiling. It didn’t take us long to realize he was mildly mentally retarded. Sort of in the Forrest Gump range of intelligence, perfectly able to function in society, just not the sharpest pencil in the cup. 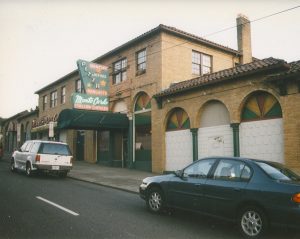 He was a janitor and handyman around the place. He would arrive at about 6 AM and start on his chores. He seemed to work pretty much non-stop until sometime in the afternoon, when I’d often see him walking out of the garage to catch his bus home. We’d wave to each other, exchange a few words. If I thought about it (and I didn’t, very often) I figured he was on his way back to some single-room occupancy welfare hotel, or maybe a group home.

Bob was also a bit of a savant, according to Darlene. (We’ve been dropping the “idiot” part of that designation for some time now, and that’s fine with me.) He was very adept at fixing appliances and such. When something stopped working around our place and we figured it wasn’t cost effective to have it fixed versus getting a new one, we’d leave it out by the dumpster and the next day it would be gone. I thought it was the mostly Hispanic laborers from the produce companies in the area, since once I threw away a bunch of outdated travel books, an old set of Britannica, and a few other equally worthless things and later saw some of these guys standing in the dumpster taking them out and putting them in bags to take with them. Who knows why. But apparently it was often Bob who got the busted toasters and lamps and VCRs, etc., and he’d fix them up. I was glad to hear this. Nice that someone got some use out of them.

But Bob’s job, mainly, was doing maintenance on the ancient, balky machines in the restaurant, some of them probably dating back to the 1920’s, and keeping things clean. When somebody drank like a pig and threw up all over the floor or the sidewalk, Bob was the one who got to clean it up. Sometimes, at the end of the day, he walked with a limp. I figured that was a gauge of how strenuous his workday had been; I was familiar with that feeling myself.

Even through the chaos and exhaustion of getting ready for moving, and then the madness of the move itself, I had noticed that I hadn’t seen Bob for a while. And though I didn’t really make the connection at the time, the Monte Carlo began an astonishingly quick slide in cleanliness at about the same time. Things were looking dirty. Going to get the dumpster key in the kitchen one day, I slipped in grease and almost took a bad fall. (I almost wish I had fallen; I’d sue Asshole John the landlord for every penny he had.) But it was then I noticed there was a continuous trail of grease between the back door of the kitchen and the dumpster. The area around the dumpster, never a visual or aromatic delight, really began to stink. I tell you, it was a miracle there was no outbreak of disease at the Monte Carlo, those last three or four months. I wouldn’t have advised anyone to eat there, and it used to be a very fine restaurant.

The reason, it now seems, is that Bob had decided to retire at the age of 59. (Why 59? I don’t know.) All the work that Bob used to do around the place simply wasn’t getting done. Asshole John the landlord spent all his time getting blotto in his own bar and boohooing to anybody who’d listen about the raw deal life had handed him, and being too cheap a sunovabitch to hire someone else if there was no other RE-tard handy.

I’ll admit that, other than noticing he didn’t seem to be around anymore, I had too much else on my mind to wonder what had become of him. If I’d thought of it I would have wondered how he was supporting himself without his wages from the restaurant.

(Time out for a moment: I just re-read what I’ve got so far, and my guess is, if I took a poll right now, most of you are thinking this is going to turn out badly, right? I mean, this sort of story always does. Some poor, hard-working guy who smiles and has a cheery word for all he meets in spite of his station in life, a guy that nobody notices too much … we’ve all seen that script. Well, hang on for dear life …)

Darlene says she sometimes hired him to do other odd jobs around the place, things not really covered by his job description. Clean up this, fix that, move this stuff over there. She paid him separately for these chores, probably off the books, and when she went to give him the cash he’d usually say “Oh, you don’t have to pay me.” She paid him anyway, figuring he was just being polite and self-effacing.

He wasn’t. He really didn’t need the money.

One of the regulars at the Monte Carlo is an accountant. He does Bob’s taxes every year. He and Darlene were talking and the subject of Bob came up. (Before or after Bob’s retirement? I don’t know. Should this guy have blabbed to Darlene? Probably not, though I don’t know what the ethical obligations of an accountant are. Anyway, the story is out now.)

“Bob’s quite comfortable, financially,” the guy says. How comfortable? Try a million dollars. That sound you just heard is Darlene’s jaw hitting the table.

Another thing I didn’t know about Bob is that he is married. His wife is described as being a bit more retarded than Bob is. And just as rich. They are both from families with money, and each is a millionaire. (In a trust fund with an administrator, living on the interest? Don’t know. Could Bob write a check and buy a Ferrari? Again, don’t know, but if he did, he couldn’t drive it. Driving is a bit beyond his skills.) Bob and spouse live in a nice apartment somewhere in Portland, and they spend their days … picking up soda and beer cans and turning them in for the deposit.

I can hardly express the range of emotions this story puts me through. One, and I’m glad to say it was the first reaction, is incredulous delight. Both in the specific, in that it would be hard to find a nicer person than Bob to be in such a fortunate position, and also in the general, in that this happening to anybody like Bob is such a wonderful kick in the pants. I don’t think I’ll ever see a bum on the street pushing a grocery cart full of his pitiful belongings/garbage without wondering what else is going on in this picture? Every one of them has a story, a past, and possibly even something as remarkable as Bob’s story.

The second thing I felt was jealousy. I won’t apologize for it, since I spread my jealousy evenly among all people who were born to wealth or inherited money. I know money won’t buy happiness, but it makes a damn good down payment on it. I figure about half of the bad worries in my life have come because of lack of money. If those worries were gone, would the remaining 50% expand to become the same amount I used to have? I doubt it. Having plenty of money would probably exacerbate my tendencies to sloth and gluttony (hey, two deadly sins out of seven ain’t bad!), but other than that, I can’t see a downside. So I’m jealous of Bob … but it doesn’t affect my delight.

And thirdly, something I am not proud of and which is a bit hard to explain, but comes with the realization that, now that he’s a millionaire, Bob suddenly is interesting. I’ll fess up: Without this news, if you’d asked me, five years from now, about ol’ Bob and the Monte Carlo, I’d probably have said “Bob who?” Now, I guarantee you, ask me twenty years from now and I’ll be able to tell you the whole fascinating story. I guess it’s inevitable that we are drawn to the out-of-the-ordinary story … but still. A million dollars makes Bob a somebody. You know?

Oh, well. I’m not going to kick myself about it. Good for you, Bob!