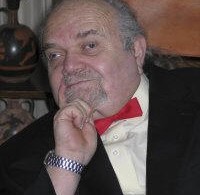 When I heard Charlie Brown had died I knew I would have to write something, but it’s so hard. I’ve known Charlie as long as I’ve known anyone in the field. It must have been 1975 or ’76 when I met him at one of the first conventions I ever attended, and the next thing I knew I was spending the night at his wonderful house in the Oakland hills. I’d never seen so many SF books, nor heard so many stories about writers I had idolized since junior high school. He knew everybody. I figure I was 29, which would have made him 39 or 40, but he quickly became a father figure to me. When I needed advice I knew I could always turn to Charlie, and his advice was always good.

For a long time after that whenever I was in the Bay Area I’d stop by his house, and often as not end up staying there a day, or even two. Sometimes there would be a lot of people there, sometimes it was just Charlie and me. He would fire up the Weber kettle and dump huge amounts of meat onto the grill, ribs and chicken and sausage, and we would feast. I’ve lost count of the number of good writers he introduced me to, not only in SF, but in the mystery and suspense fields, and even types of fiction I never would have read on my own, like the sea stories of Patrick O’Brian.

I hadn’t seen him that often in recent years, probably because I had stopped going to conventions as often as I used to. But the last time was not too long ago, and I’m grateful for that. He was his same jolly self, with a lot of great new stories to tell. He wasn’t getting around so well, but if that bothered him, he never let on. We both laughed about being old men now. He said he was the luckiest man in the world, in that he had found out he could make a living—a good living—at what had started out as a hobby. He spent most of his life doing what he loved. I’m so glad to hear that LOCUS will continue, as he wished. But the world won’t be quite the same for me ever again without Charlie in it.