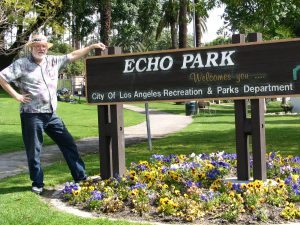 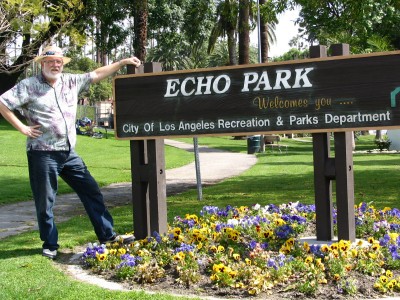 In the ‘60s, one of the reasons Chris and I did so much walking on Sunset was that it was the most direct way from Hollywood to Echo Park. After we’d been in LA for a few weeks we found a card on the message board at the Presbyterian Church on Sunset (no longer there) where they used to serve a free lunch every day, concerning somebody who was willing to take in crashers for the night. The crash pad was in Echo Park, and they’d only take two at a time, first come, first served. So we walked there in the dead of night and found a hilly neighborhood, few streetlights, and poorly-marked houses set high on a hill. We almost couldn’t find the address, and when we did, we wished for machetes as we climbed through tangled plants all the way up cracked concrete stairs to the top. We knocked on the door and were about to leave when a sleepy woman answered and invited us in. 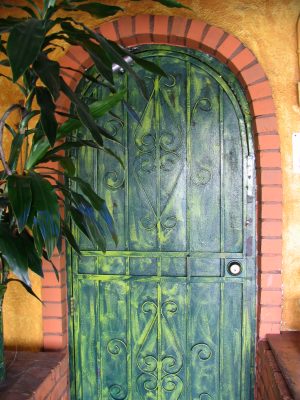 Hard to believe, huh? That people were that trusting in those days? The occupants of the house were Lulu and Jan. Lou had the upper one-bedroom apartment and Jan had the lower. It was funky but nicely decorated in thrift-shop ‘60s tie-dye peace sign rock and roll. We slept there that night, and for many subsequent nights. We quickly became friends, and they rolled up the welcome mat. No more crashers; we were permanent, temporary guests.

Jan was Playboy-centerfold gorgeous. Lou was more of an earth mother, somebody you just liked instantly. Both had jobs, but Lou was about to quit hers, as she was about six months pregnant and planning to give up the child for adoption. They were not lesbians, and the rest is none of your business.

We spent maybe a month there, on and off, as we looked for temporary work and dropped acid and just were generally irresponsible. I remember many great nights. One in particular, there were maybe 15 people squeezed into Lou’s tiny living room, sitting or lying on every available square foot, all of us stoned out of our minds. There was enough hair among us to start a mattress factory, and not all of it was on the girls’ legs. Candles all over the place, incense burning, beads and ankhs and all that hippie shit. Somebody put on a Mamas and the Papas record, If You Can Believe Your Eyes and Ears, the one where they’re all in the bathtub with to-die-for Michelle stretched out across the others, and turned the amp up loud, and we began to sing. All of us.

When the song came to an end, we all laughed. Everyone in the room knew all the lyrics. Then “Straight Shooter,” (if you know what I mean), and “Got a Feeling,” and “I Call Your Name.” Everybody knew all the lyrics to all the songs. When it was over, we all just sat there. It was such a groovy feeling. We were a community, this was our music. Not only did we know it all, we could harmonize to it. After that it was long into the night, with Rubber Soul, Revolver, Sunshine Superman, Moby Grape, The Byrds’ Fifth Dimension …

Then one day we were on the road again, and our paths never met again. I wrote a few letters, but I was busy dodging the draft board and had no permanent address, and we lost contact. It’s been around 40 years. I wonder where Lulu and Jan are now? 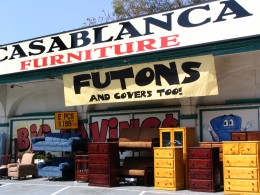 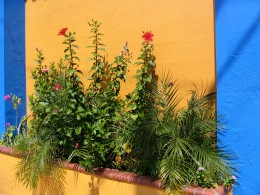 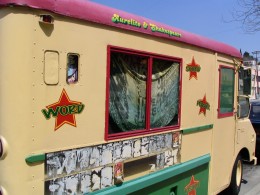 Had to take that trip down memory lane, as ever since then Echo Park has held a special place in my heart. When I worked here in the movie biz in the ‘80s I came back to Echo Park once. The house was still there, but the neighborhood was now almost exclusively Hispanic, and very rundown. It didn’t feel too safe. The people weren’t smiling, like they used to. Maybe it was because I was driving a studio-supplied Camaro. 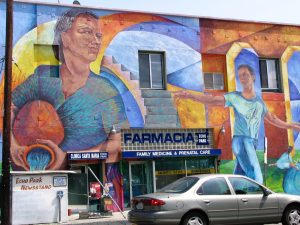 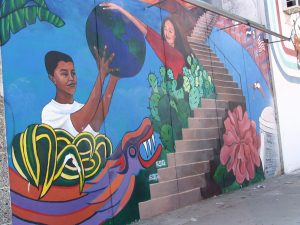 Now it’s been partially gentrified. Still a lot of Latinos, but they are living in nicer places. The old house is gone; I can’t even find the right stairway, though I think I came within a few house numbers. Looks like a two-story apartment unit now stands where it was. It can be reached in a car through an incredibly narrow alley in back—I’m talking scraping both your side-view mirrors if you’re not careful—but it looks even less familiar back there. 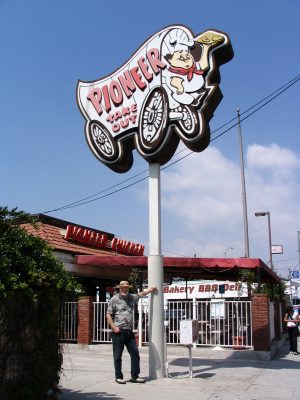 Anyway, the smiles are back on the faces in the neighborhood. I remember shopping at a huge bodega on Sunset, the kind of place where the aisles are too narrow for two shopping carts and the produce is piled almost to the ceiling. Most of the checkers didn’t speak much English, but we got along. They didn’t seem to mind us raggedy-ass hippies, unlike some of the white folks at the time.

The bodega is gone now, replaced by a parking lot and a Walgreens. What a waste of space. But the Pioneer Chicken stand that used to be behind the bodega is still there, still dispensing grease. I ate many a chicken dinner there, when I’d scraped together enough money. Across the street is a place that advertises itself as a “Mexicatessan.”

The park part of Echo Park is mostly filled with a charming little lake. There’s a fountain in the center. There’s an island that you used to be able to reach by a red Chinese bridge, but that’s fenced off now, and the lock on it looks old and rusty. Maybe they open it in the summer, when more people are renting the little foot-powered paddle boats. 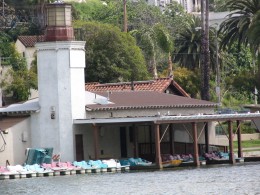 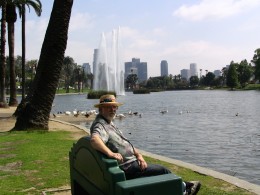 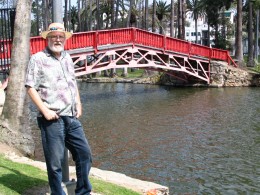 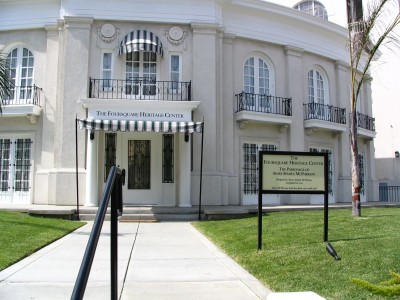 Across from the park is the Angelus Temple, built by crazy Aimee Semple McPherson, founder of the Foursquare Church. It was built in 1923, and it is seriously big. It seats 5000 people. I’ve never been inside, though I’ve tried. It was locked this day, too, but it looks like a prosperous, going concern, long after Sister Aimee went to that great revival tent in the sky. Her manse, designed by herself, is tidy and clean behind a tall fence.

(Historical note: Sister Aimee vanished from Venice Beach for 32 days in 1926, then turned up in the desert with a cock and bull story of kidnapping and white slavery. None of it added up, but she stuck to her guns, and charges against her were dismissed. But the public no longer loved her. Abortion? Plastic surgery? Meeting a lover? Publicity stunt? Nobody knows!)

We ate at the Costa Alegre on Sunset. It’s very nicely decorated, like so many Mexican places in LA, but the food wasn’t impressive. Try another place for your burritos. 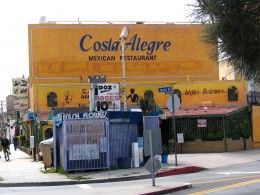 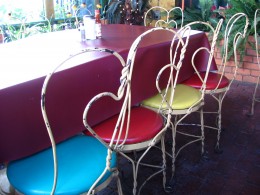 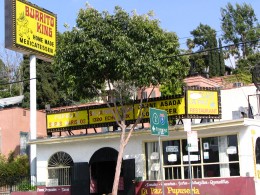 After the walk we drove up the hill to find a church whose dome we’d seen from the street. Ukrainian Orthodox, and very lovely from the outside.