Out of the closet and deep into Hollywood 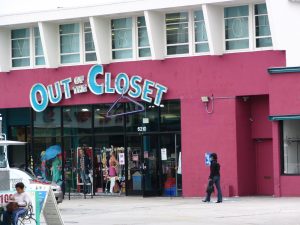 We didn’t cover any more ground than usual today, but some ground is a lot more interesting than others …

West of Gower Gulch is one of a dozen or so Out Of the Closet thrift stores. After spending three years in the Five Cities area of the Central Coast, which didn’t have much in the way of thrift stores, Lee hit these places like Sherman hit Atlanta, like a hungry lion hits an antelope. It wasn’t pretty. But between OOTC and Big Lots, we quickly got some furniture, some knicks and knacks, and Lee got a bunch of new clothes. (New, to Lee, means only owned by one other person previously, and lightly worn.) The stores are operated by the AIDS Healthcare Foundation, which is even better. You shop at St. Vincent de Paul and your money goes to pay for the misdeeds of pedophile priests. You shop at Goodwill and you are benefiting from the extremely cheap labor of the mentally retarded. Shop at Value Village and your money goes into the pockets of capitalists who just happen to get all their used stuff for free! (I approve of the Salvation Army, but their thrift shops are for crap.) OOTC does good work, with free HIV testing every day. Plus … let’s face it, gay men have better taste than the rest of us. The stuff they throw away is lots better than what you get at other thrifts. And you’ve never seen such fancy window dressing at a thrift store. All donated by the interior decorators of Hollywood …

Just down the road is the Hollywood Palladium. It’s looking pretty rundown now … and come to think of it, it looked pretty rundown in the ’60s, when I attended at least one rock concert there. I wish I could remember who it was. 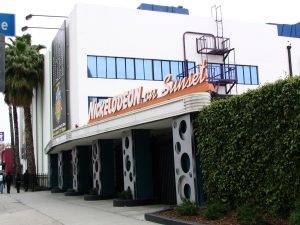 Right across the street from that is an old auditorium that is now owned by Nickelodeon Television. I can’t recall what it used to be, but I vividly remember attending a free performance of Hair shortly after the summer of love. No seats; everybody was just standing around, like in Shakespeare’s day, if Elizabethans went to the theater stoned out of their minds on various things. Everyone sang along and danced to the musical numbers, and when it came to the part where the cast took off their clothes, a lot of folks in the audience thought that was a groovy idea, dude, and stripped as well. 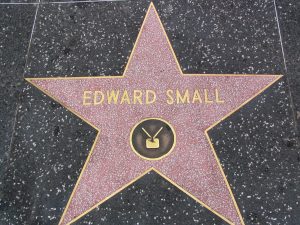 Now we come to the corner of Sunset and Vine, where serious Hollywood begins. The extreme southern edge of the Walk of the Stars is there. The two stars that begin the walk are: Franklin Pangborn and … Edward Small? Which illustrates a neat and possibly sobering thing about the walk. Pangborn was a well-known bit player in his day, you’ve certainly seen him if you’ve watched any old movies at all. He made 217 movies between 1926 and 1957. I would say he’s remembered, at least among film buffs, if not exactly a household name. But Edward Small was a producer, probably not all that well known even in his day, and just about entirely forgotten now. Fame is fleeting, as somebody once said. 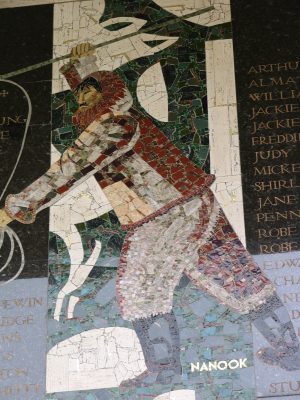 Also at that corner is a marble building that used to be a savings and loan and is now a Washington Mutual branch. They have preserved the wonderful mosaics which, when I was there before, I somehow never looked closely at. Now I find that there are several hundred names engraved in the stone, and a dozen portraits of folks like Gary Cooper, Mary Pickford, Douglas Fairbanks, and Bette Davis. But my favorite was not a Hollywood star; he never even visited California. This was “Nanook,” whose real name was Allakariallak (got to admit, it would be hard to get that moniker on a marquee!), and who starred in what is considered to be the first (and still one of the best) feature-length documentaries: Robert J Flaherty’s Nanook of the North. Ironically, he might have been a big star, because producers went looking for him after the success of his film. They wanted to take him on tour. But he had died, frozen to death on an ice floe.

(Interesting link: Flaherty later worked on Tabu: A Story of the South Seas (1931), and the cinematographer on that film was Floyd Crosby, who won the first cinematography Academy Award for the picture. Floyd is the father of our friend David Crosby, and we’ve seen the award at Croz’s house!)

I can’t recall what used to be across the street from that S&L, but what’s there now is a building that houses a Borders, a Beds Baths & Beyond, and a lot of very expensive condos. And across from that is a skyscraper that’s undergoing renovation. The bottom ten floors or so are wrapped in plastic, like they’re planning to ship it off to Dubai or something. 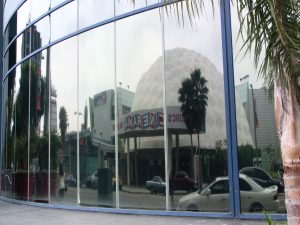 Just down the street is the Cinerama Dome, which has now expanded into a cineplex called the Arclight, which seems to be a high-end cinephile venue, with all seats reserved. They brag about their projection and sound systems and extra-roomy seats, and there’s a restaurant and gift shop. It better be fancy; I learned that the admission price is $14! The only time I was there (I didn’t have the money for many movies back then) was to see Grand Prix, with James Garner. I understand they have returned the Dome to its original condition, with the three Cinerama projectors and 7-channel sound, and can now show the original prints of those great old ultra-wide-screen epics. 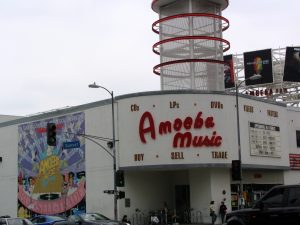 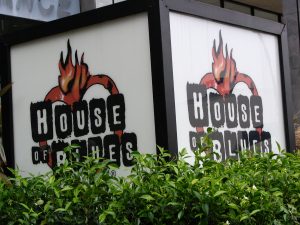 On past Cahuenga, which takes you up to the Hollywood Bowl. I’ve never been there. I understand Garrison Keillor is doing his “Prairie Home Companion” show there this June, but I suspect the prices would be a little rich for our pocketbook. Hell, I’m still reeling from the $14 Arclight prices. 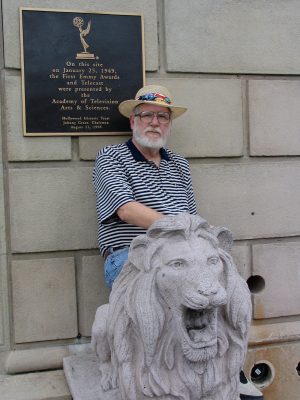 Not much further down is the Hollywood Athletic Club, the site where, we learned, the first Emmy Awards were televised in 1949. Jeez, how many shows did they have in 1949? NBC, CBS, and DuMont were all doing just a few hours of day, and almost all of that was in New York. (Did you know the Emmys were named for the image orthicon tubes that were the heart of TV cameras? Thus “immy.”) The Emmys have always been the most chaotic of the award shows, with ever-changing categories, sometimes seeming to run into the thousands. The “technical” Emmys are even larger, and are not broadcast. And they are divided into Prime Time, Local, and Daytime categories and, for all I know, even more. (Believe it or not, this will become relevant here in just a little bit …

Gosh, such a wealth of stuff to write about on this mile of Sunset, I won’t be able to say much about it all. 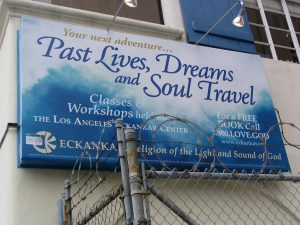 Across the street, the Psychiatry: An Industry of Death Museum. What’s that all about? A Scientology front? We didn’t go inside, as the operation had a messianic look to it.

The Hollywood offices of Eckankar. The sign out front says “Singing HU brings one closer to God.” Apparently HU is God’s name … or maybe his initials. Pronounced hue. What was wrong with Om, or Hare Krishna? Could you chant it like the Ames Brothers: 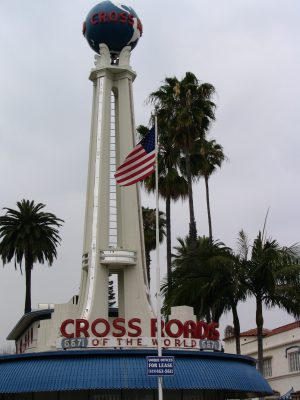 Next is Crossroads of the World, a crazy little building that looks like a ship, set in a courtyard with some really interesting plantings. This was there, looking much the same but a lot busier, back in the ’60s. Most of the offices seem empty, and I wonder why? It’s such a distinctive address, and it’s neat and clean and right in the heart of things.

Getting on toward Highland, we noticed the traffic was almost at a standstill. That usually means there’s something happening up on Hollywood Boulevard, so we decided to take a detour. That took us alongside the legendary Hollywood High School. It’s practically unchanged since the ’60s, except for having a stout fence all around it. Sad, but what are you gonna do in a world where sick pricks come to school with bombs and guns? There’s a mural on the auditorium. Don’t look for Aristotle or Shakespeare or Galileo. Here we got Judy Garland, Rudolph Valentino, Bruce Lee (I think), Elvis (I think), Cher, Carol Burnett, Cantinflas, Laurence Fishburne, and then five women I’m not sure of, except one of them may be Marilyn Monroe and another may be Dolores del Rio. They’re not great likenesses. Can anybody help me out?

We went by the football field, home of the … are you ready? The Sheiks! So many jokes present themselves I hardly know where to begin. You think their school song is “The Sheik of Araby”?

{{I’m the Sheik of Araby

Your love belongs to me

At night when you’re asleep

Into your tent I creep!}} 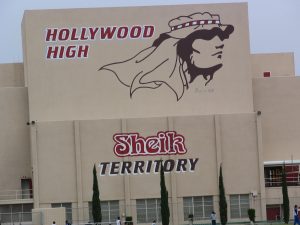 Pretty racy stuff. Do their cheerleaders wear chadors or burqas? Is the school mascot a camel? Does the team have any specialty plays involving suicide bomb passes? Okay, enough.

Past Mel’s Drive-in, made famous in American Graffiti (though not this particular one, it was filmed in San Francisco) (and, I seem to recall, the Hollywood one used to be at the corner of Sunset and Highland and had actual carhops), and sure enough, there was a crowd, barriers, floodlights, cops, and a long line of limousines on the closed-off block of Hollywood between Orange and Highland.

It was the Daytime Emmys! Held, appropriately enough, in the daytime.

We watched for a while as the stars got out of the cars and the crowd screamed. I looked and looked and looked, and didn’t see one face I recognized. I wondered what to call these people. Generic celebrities? Obscure celebrities? They weren’t obscure to the soap opera fans gathered in the grandstands. But damned if I’ll watch a soap opera just to find out who these people were. The women were gorgeous, though, in some really stunning gowns.

We moved on. Next week the rumor is that Tom Cruise will be right there on that block for the premiere of Mission Impossible: III at Graumann’s. We’ll keep you posted.

Our route back to Sunset took us by the Hotel Roosevelt. I stayed there for about a week in the ’80s, shortly after it had been renovated to its original glory. (Nice rooms, tiny bathrooms!) It was one of the places, along with the Ambassador, where a lot of stars used to stay, and my room had a great view of Graumann’s Chinese. These days it would have a great view of the Kodak Theater, too, which is ironic, since the very first Academy Awards were held at the Roosevelt and now they’re at the Kodak, right across the street. By the way, the Oscars have been held at ten different venues, and we’ve visited five of them. We’ll probably visit them all … if I can ever figure out where the Academy Award Theater is or was on Melrose Avenue. They were held there only one year, 1949, and I can’t find an address for it.

On the way back we passed Darth Vader and Tickle Me Elmo … suiting up for a day of cadging dollars from tourists on the Boulevard. Strange place, Hollywood. Almost like a 365-days-a-year science fiction convention.

So that was our walk. And, not to brag or anything … have you ever taken a walk quite like that through your neighborhood?