The Backside of Los Angeles 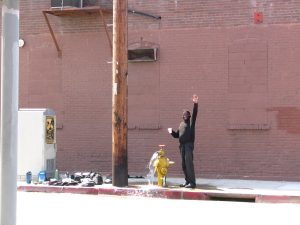 Our next-to-last day in Los Angeles didn’t show off the best side of the city. All cities have places like this, and maybe you’ve seen them, but probably as you sped through on your way to somewhere else, or possibly when you needed some oddball item from a warehouse carrying specialty merchandise. Walking through it, you learn a lot more. Not all of it is nice, but a lot of it is interesting.

We headed down Santa Fe Avenue to Olympic Boulevard, passing such cultural wonders as the Play Pen (Totally Nude, valet parking), an “architectural salvage” yard, which is the place old toilets and claw-foot bathtubs go to die, and a big trailer selling something called PETaPOTTY, a dog toilet available with either real sod or synthetic grass, for little Fifi to do her business without leaving yellow patches on the lawn. What will they think of next? There were real loft apartments here, the sort that didn’t have LUXURY YUPPIE SCUM LOFTS painted on the sides, but instead the names of the businesses that used to thrive there. A rock band was rehearsing, very loud, bothering nobody. 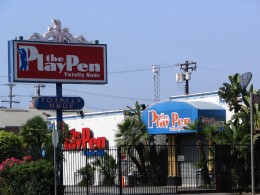 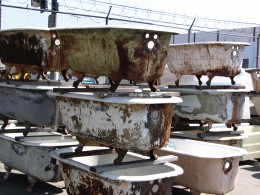 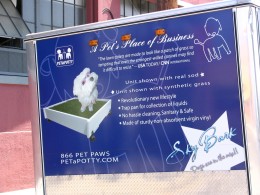 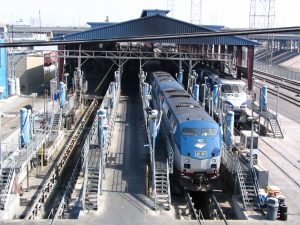 Crossing the river we also went over the Amtrak maintenance yards, and several places devoted to recycling this or that. Then we were in Boyle Heights again, by a massive Sears warehouse. I’m always surprised to find they’re still in business. When I was young we divided our shopping evenly between Sears, Wards, and Penney’s. Now Monkey Wards is gone, and I haven’t been in a Sears or Penney’s in years. Times change, huh? 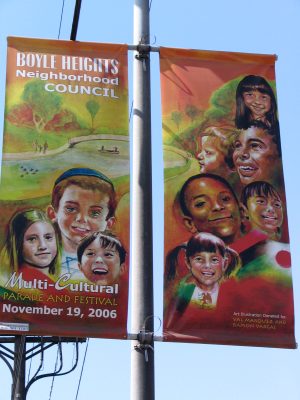 By the time we crossed back over the Washington Street Bridge (1931, and decorated with some nice friezes of heroic bridge builders in a sort of WPA, Soviet neo-realism style), I knew what this neighborhood needed to spice it up a little. Districts! Just to the north, on our last walk, the area was lousy with districts. Down here … nothing. Okay, the Warehouse District was already taken (twice!), so I looked around to see what else was available. There was the obvious Recycling District, to include toxic household waste (open every Friday, Saturday, and Sunday, 9 to 6). Also the Asphalt, Concrete, and Gravel District, as there were a lot of places engaged in these activities. And last but not least, the Sweatshop District. This is another thing you might not notice if you drive through. Above the ground floor of a lot of these seemingly empty buildings you can see light fixtures through the open windows (no air conditioning; how can it be a sweatshop of you don’t sweat?). Signs, mostly in Spanish but we could puzzle them out, advertised for garment workers. Sewing, cutting. Piecework, and probably not a green card within three miles.

Don’t think any of those would fly with the City Council and the Chamber of Commerce, do you? Well, neither do I. But I do have a good one, a more serious one. How about the Railroad District? The map shows places like Ninth Street Junction, Clement Junction, and Redondo Junction. It’s obvious that the railroads have been here for many, many years, and at some point those names probably made sense. But somewhere in the not-too-distant past a lot of work was done on the railroads (all the livelong day, no doubt). Big, new, sweeping overpasses have been constructed, and I suspect a railroad man from the 1930s wouldn’t recognize the place. The river has been lined with tracks for many miles now, starting a bit north of downtown, and sorted out so that it’s passenger trains on the west side, and freight on the east. In the time we walked through, we saw the Amtrak Surfliner go by, and two very, very long freight trains. When we couldn’t see trains, we could hear their whistles. 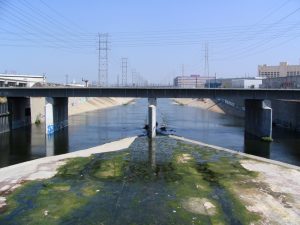 Here’s an odd thing. Under the Washington Street Bridge the river briefly divides into a west fork and an east fork. This distinction would be wiped out if the river rose only a few inches, but you can see in the picture that in the center is an almost dry area. I wonder what that’s all about?

On the west side we were able to look down at one man’s encampment that doesn’t quite dislodge the Olde English 800 Malt Liquor man’s lock on the Most Squalid award (see Down a Lazy Concrete River #1), but comes close. One of the many, many items of junk this guy had collected was a huge rat trap. Then I saw it wasn’t junk. A rat came out of his empty bedding and scrambled into a pile of trash. Oh, brother. Later, we saw a man I assume was also homeless, judging by his goods laid out neatly and carefully on the sidewalk, and he had procured an iron wheel that would open the standpipes for him. He had water flowing and was cleaning his stuff. He smiled and waved at us. So, dude, you don’t have to live in a rathole and look like a walking pile of garbage. You may be down and out, but how you deal with it is at least partly your own choice … unless you are one of those dark mutterers who really ought to be institutionalized for your own good, I guess. 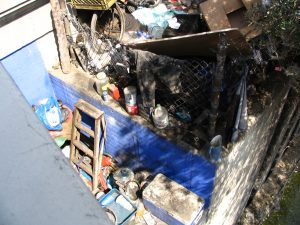 The saddest thing we saw today … other than rat-man, of course … two stray dogs. One was brown and looked very street-savvy. I watched him expertly cross a busy 4-lane, looking both ways, hurrying. The other was white—had been white, though now he was filthy—and didn’t seem to have a clue. He kept walking out into the middle of the road and just standing there until somebody honked at him. He seemed interested in us but was too frightened to approach. I feel sure this was someone’s pet, and had wandered away. I remember the day my own dog wandered, and how desperate I felt (imagine how she felt), and I hope this one gets back home. 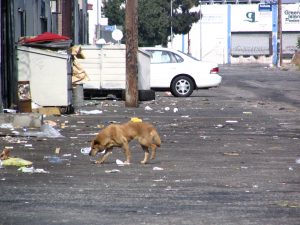 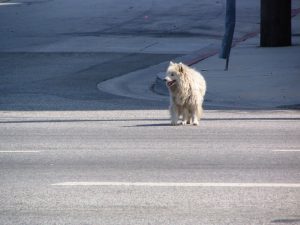 Lastly, Mike’s Sandwich Shop, home of the famous Hockey Burger, where I stopped to refresh myself with bottled water, as the shop was closed on Sunday. Now, I can’t swear to it since I’ve never ordered nor eaten one of these Hockey Burger wonders, but it appears, from the picture on the billboard, that it consists of a bun, cheese, a big helping of ground beef (the hockey puck?), and six slices of Spam. You can’t help wondering if there are other items on the menu, like egg bacon and Spam, egg bacon sausage and Spam, Spam bacon sausage and Spam, Spam egg Spam Spam bacon and Spam, Spam Spam Spam Spam Spam Spam Spam baked beans Spam Spam Spam and Spam, or Lobster Thermidor a Crevette with a mornay sauce served in a Provencale manner with shallots and aubergines garnished with truffle pate, brandy and with a fried egg on top and Spam. (Viking chorus: Spam! Spam! Spam! Lovely Spam! Lovely Spam!) (If this doesn’t make sense to you, you haven’t seen enough Monty Python.)

It seemed to me that this episode was a little thin, and this may be a continuing problem as we make our way south. As the upper reaches of the Valley were mostly areas of dull housing, we are now making our way through a region of warehouses, soon to be replaced by more housing. We’ll see. But I thought I might throw in some extras, at no added charge. If this was a DVD, this is where the director’s commentary, outtakes, publicity stills, storyboards, and bloopers would be. Since the whole series is basically nothing but director’s commentary and stills, and we don’t have any bloopers or storyboards, you’ll have to be content with outtakes. These are places that aren’t on the river but I wish they had been. Think of them as sidestreams, or tributaries, and a place to show off more of Lee’s wonderful pictures. 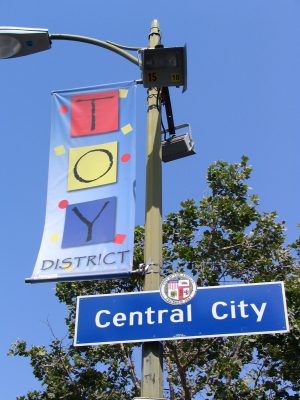 It’s small, but it’s jam-packed. There are vast warehouses on the periphery, with brand names on the side, no doubt stuffed to the rafters with toys. I don’t know if the public is welcome in these places because we didn’t try to visit. I’m trying to sell my toy robots, not buy more! But here in maybe 12 tightly packed blocks it’s all laid out on display. Most of the merchandise is cheap, much of it from Asia, at least some of it illegal knock-offs of Disney and other brand-name products. Most of it is tiny storefronts with hardly enough room to turn around in for the mainly Hispanic and Asian proprietors, and even less room for a big guy like me. One of the larger stores had plastic cars that I would have killed to own when I was six. In fact, it had bikes and skateboards and virtually any toy with wheels that was big enough to ride on. Lee and I agreed the silver Corvette was the vehicle of choice in this pedal garage. There was a place with hundreds little party dresses. 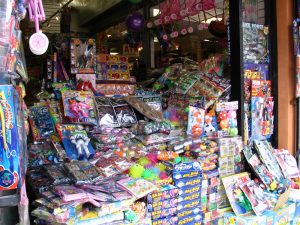 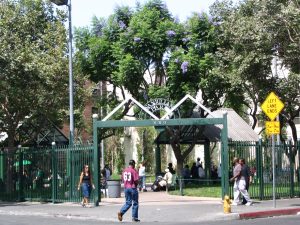 Around the corner was San Julian Park, a little patch of green full of card and chess players. Under the name it said SRO. That’s what it was surrounded by, too: Single Room Occupancy hotels. This was the edge of Skid Row, and the streets were littered with the flotsam of jetsam of humanity, and their meager possessions. There must have been half a dozen missions within three blocks. Not the old Spanish missions that we’ve visited, but rescue missions: a bowl of soup, a worship service, and a cot for the night, first come, first served. Los Angeles doesn’t have nearly enough beds for its homeless population, even if most of them wanted to use them, which many don’t.

Across the street from the park was Engine Company 23, no longer part of the LAFD but kept quite busy, according to two musician dudes standing around outside of it, in the thriving film location racket. Ghostbusters one and two were filmed there, and Big Trouble in Little China, Flatliners, The Mask, V.I. Warshaswski, and many others. 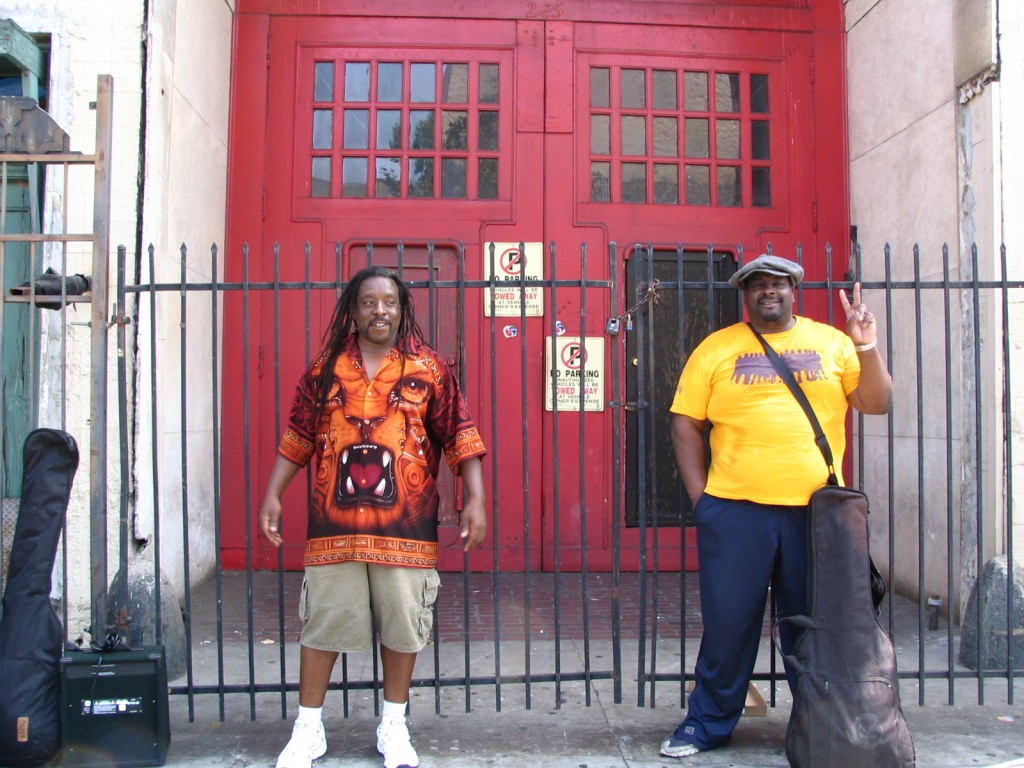 It’s not all toys. There was a place with a million hats. Lee bought three for $20. And a big police station fronted on Wall Street. I saw a cop drive through with his hand on his baton. This is a tough neighborhood.