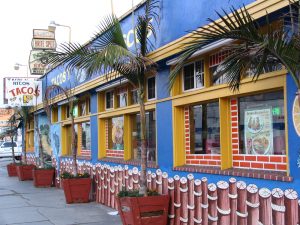 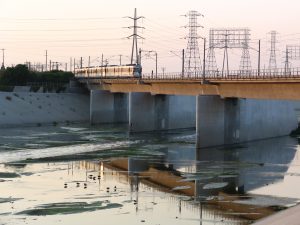 The Red Line to 7th/Metro. The Blue Line to Del Amo Station. Can’t jaywalk across Del Amo because there’s a Highway Patrol car sitting right there, so it’s west to Santa Fe, around three corners of the intersection because there’s no pedestrian walkway where we need to go. Then over a series of dirt paths, lumpy grass hillocks that are very hard on my knees, and 24-inch-wide sidewalks, crossing Compton Creek—which has a bike path that dead-ends at the 710, so we can’t walk there—over the creek, under the freeway, over the river … and at last, onto the bike path. 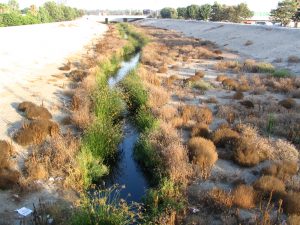 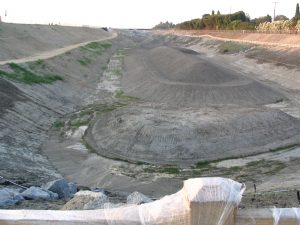 Over there beyond a ditch and behind a fence is the Virginia Country Club and Bixby Knolls, which I am informed is a swanky neighborhood. Did I say ditch? It’s one hell of a ditch. It’s wider than the river and twice as deep. We think it’s some sort of overflow basin for when it rains real hard. There is a flood gauge that tops out at 39 feet, there are floodgates, there is a pumping station.

But it appears that, as it is way up north and west at the Sepulveda Dam, where the land behind the dam is used recreationally, they have something in mind for this ditch. They’ve planted ground covers, and are sculpting the dirt into hills and gullies that look vaguely like a race track. Maybe for off-road bikes and such? Skateboard park? We told ourselves we’d come back in a year or so and see what they’ve done with it. I wonder if we will. 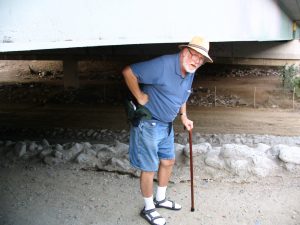 Then under the 405, the San Diego Freeway. Getting so close to the end we can almost taste the sea breezes. We were walking in the evening this time, as the last few walks have been too damn hot even though we set out early in the morning. Leaving at 5:30, an hour and a bit to get there, and it was in the mid-seventies. But we cut it a little close. We didn’t want to be on the bike path when it got dark, and now the sun was setting.

We could tell the path didn’t go under the 710, so we went overland for a bit and into a nice little neighborhood that seemed to have actually have benefited by being cut off when the freeway was built, in that there was no through traffic at all. A good place to raise a family, and the streets were full of kids on bikes.

At last, Wardlow Station, and a short wait for the train. Going south at the tail end of rush hour the train had been crowded. Going back we had our pick of seats. It was dark now, and the Blue Line had a slightly different clientele, a bit noisier, maybe a wee bit less organized. Not people going to and from work, but people without much to do, bent on other errands. Not the smartest folks you’d ever want to meet, either. One dude was blabbing loudly on his cell phone for a while, then looked up and realized he’d gone past his station. So what does he do? He presses the emergency intercom and tells the driver he’s missed his station. So … what? You expect him to back up for you, idiot? The driver was remarkably patient, explaining the complex process of getting off at the next station, crossing the platform, and getting on the next train going … the other way! What a revolutionary idea! You wonder how some people make it through the day, don’t you?

That guy got off—you can probably find him wandering around Pomona or someplace like that, wondering how the hell he got here—and was replaced by a small, very fat woman, who took the seat right in front of us. After a short time she informed us that she couldn’t find her hairbrush today. Later, Lee and I agreed she hadn’t been able to find her hairbrush for years. Then she told us she’d misplaced her dentures and was very embarrassed about it. I figure she lost them around 1992. Before long she was showing us family pictures of her as a younger, slimmer woman. “I put on 100 pounds this year,” she said, with an air of puzzlement. She bummed a smoke off me, then dropped a vitamin pill on the floor of the train. Trying to pick it up, I was sure she was going to fall over, but she didn’t. However, the act of leaning over seemed to exert some … pressure … somewhere, and she let loose with a fart that had me ready to switch trains even if the next one wasn’t due for half an hour. Lee didn’t smell it; she was under the air conditioning vent. Lucky her.

Ah, well. Only two more Blue Line train trips and then we may never ride it again. My goodness, will I ever miss that.

Today we saw the cargo cranes of the Port of Long Beach, and later, the tall buildings of downtown. Next stop: The Queen Mary!

We knew there was no entrance to the bike path from Wardlow Street because we’d been down it the day before and had to scramble over dirt paths to even get off it. These bike paths are wonderful, but I do wish they’d provided more entrances. Why do you need unscalable fences that sometimes stretch for a mile or more, and why not have an entrance to the path at every bridge? It’s no biggie for a biker, I know, to go a few miles out of the way, but it’s a long damn way for a guy with bad knees.

Anyway, we detoured down Magnolia Street—which actually is lined with magnolias—then turned west on Spring and started south on De Forest, with the river to our right. Not that we could see it. At this point the mighty Los Angeles River is contained by very high levees on each side, and there’s a pumping station every half mile or so. This is where it all comes out in the rainy season, all those many acres upstream funneled down the valleys and into the channels … to right here. And believe me, though it doesn’t rain much in Los Angeles, when it does rain, it can come down hard! It looks to me like they’re prepared for it, though what would happen in a 100-year flood is anybody’s guess. Finally finding an entrance on Willow Street, we climbed way, way up onto the embankment and found ourselves looking down on the roofs of one-story houses. I’d guess we were forty feet above them. I tried to visualize a break in the levee, and it wasn’t a pretty picture. I don’t think the rushing water would pool and just lie there, as it did in New Orleans, which is below sea level, but it would wreak all sorts of havoc as it found its way to the sea.

It was an ordinary neighborhood, this little corner of Long Beach, with lots a bit larger than the norm in LA to the north, and nice-sized back yards. There was an architectural quirk that I found a little odd. Most of the houses we could see had ornamental eaves that extended the roofs down to within a few feet of the ground. Some were too steep to climb, but with others you wouldn’t even need a ladder to get on the roof. Obviously these houses were all built around the same time, but they’re not identical by any means. It’s just that most of them have these funny roofs. What’s that all about? Later, we even saw a motel with the same theme going. 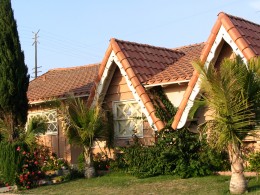 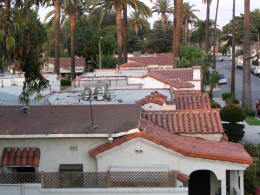 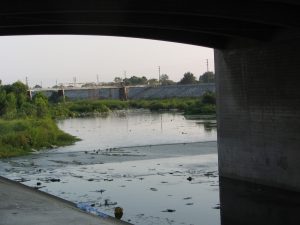 Somewhere along in there the river had widened and it was no longer possible to see the channel down the middle. It filled the riverbed from bank to bank. Just under the Willow Street Bridge we saw something we hadn’t seen in a long, long time: Trees! There was soil down there now, and a few willow trees had taken root, along with a lot of grasses and the low shrubs that sprout up around here where there’s any water to nourish them.

What else? Oh, yeah, in one back yard there was a German Shepherd of the tail-chasing variety. You’ve probably seen them, running endlessly in circles, unable to catch that critter that’s been following them all their lives yet determined to never give up the chase. Well, this fellow had caught his tail, and didn’t seem to know what to do with it. He’d chew on it for a while, look back over his other shoulder to see who was chewing on him, and then move in slow circles until he’d caught his tail again. I guess every life needs a purpose. 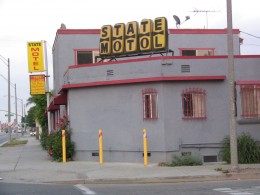 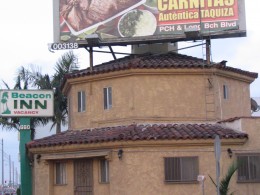 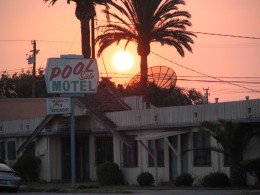 We attained the street again at the good old Pacific Coast Highway, Route 1. It felt good to see it again. We have driven every mile of Route 1, and used to live within a quarter mile of it, in Oceano. Here it is lined with cheap motels (and one motol, whatever that is), some of them pretty much bottom of the barrel, others quite nicely maintained. We were both hungry, so we stopped at a brightly painted place called the Brite Spot. I’d seen others with that name around the area, but I thought they were burger places. This one was Mexican, and surprisingly good. I watched vapid Spanish telenovelas on the wide-screen TV as I enjoyed my enchilada and taco. They were pretty much like vapid English soap operas, only better, because you didn’t have to follow the stupid dialogue.

Then onto the Blue Line once more as the sun was setting. It will be the next to last time we take this route, as the next walk will bring us to the sea!