John Varley Picks Up An OSCAR 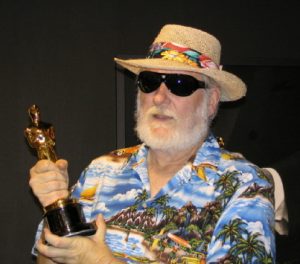 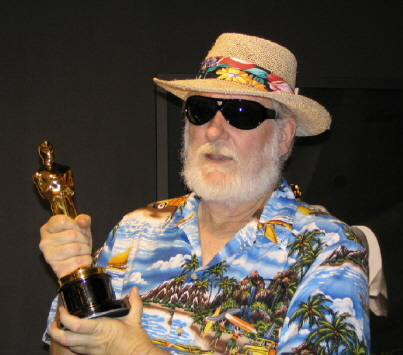 Lee took these pictures at the “Oscar Petting Zoo” at the Hollywood & Highland Center, where they had one award you could handle. I bought the sunglasses for the occasion; I already owned the shirt and hat. The Oscar was attached to a chain so you couldn’t make a break for it. There were 50 others, the very ones that were given out last night … then promptly taken right back so they could be engraved with the winners’ names. The one I am holding will be re-gilded (all those grasping hands probably rubbed off a lot of gold) and awarded to somebody in 2007. Maybe it’ll be me. I’m working on my acceptance speech, which will go something like this:

And I’d like to thank the Academy, and all the little people who helped make me the huge star that I am … and you like me! You really, really, like me! 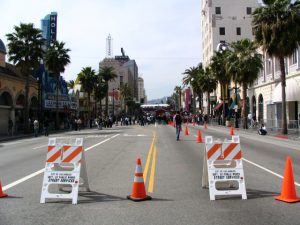 So on Oscar day we went back to the Kodak Theater … or toward it, anyway. Hollywood Boulevard has been closed for a week on that block as the media and cops geared up for the big event. It will be closed for another three days. Seemed like a lot of fuss to me, but it turned out I had no idea. Now it was closed all the way to Highland, about eight blocks. Before the day was over it was closed all the way to Vine. We cruised around the few side streets that were open, and almost all of them were temporary no parking zones. We got incredibly lucky and found a parking space only a block from Hollywood and Highland, and started looking around. 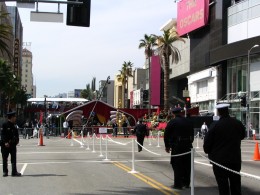 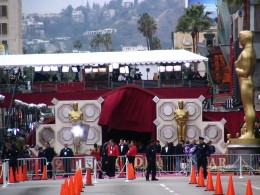 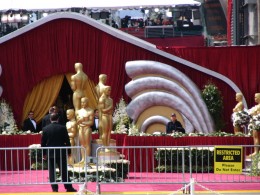 ALL the side streets were blocked off. Huge concrete barriers had been dropped into place during the night. We passed huge squads of police, on foot, in cars, on motorcycles and bicycles. Sheriffs, temporary rent-a-cops … I’d estimate there were well over a thousand. The bomb squad was there. Ambulances and fire trucks were parked all over the place. Cutting right across H’wood Blvd. were three long lines of concrete barriers, offset, cut only by strips of hydraulic-powered spikes that would blow all your tires, making a car-bomb trap.

Orange cones were everywhere. Even Sunset Boulevard had 10 blocks of isolated lanes marked AWARDS PASSES ONLY. We saw dozens of stretch limos headed hither and yon, and an old Rolls-Royce limo on a flatbed truck. All in all, I think the security area covered maybe 25 or thirty blocks, maybe even more.

People were allowed to walk around except in the immediately area of the theater, but the sidewalks are not wide, and each was cut off with metal crowd-control barriers full of people. This was at NOON, remember, with the ceremonies still 5 hours away. All the bleacher seats were full. Good luck if you have to take a pee. 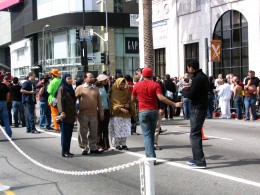 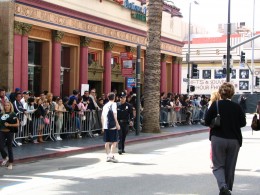 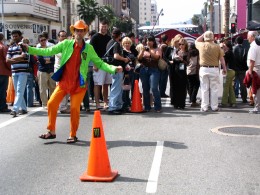 We tried to squeeze around a corner onto H Blvd., and got caught in a crush. It was tough enough for me, and I could see over everybody’s heads. For Lee, it was practically life-threatening. But we got through to easier walking. We took a few pictures of nothing happening, then skedaddled.

Jeez. Do I think it was overdone? Yeah, practically everything is, these days. However, it’s not all post-9/11 paranoia. The rich, powerful, and famous are always roped off and kept away from the rest of us. It’s probably always been like that. I first encountered it in Toronto in about 1990, when a dozen “world leaders” came to town for some useless conference or other, and traffic was stalled for hours every time one landed at the airport, as all the freeways were entirely shut down. Nine square blocks were surrounded by chain link, cops, and Canadian army. 1990, remember. Again, in 2000, Lee and I were held up on a freeway on-ramp for half an hour while Dick Cheney’s motorcade closed the I-84 freeway in Portland. This was not a Vice President (the most useless political office yet invented by man) but a VP CANDIDATE. When the Prez comes to town, it’s much worse.

I have a hard time saying they should loosen up. Just think about it. If you were Osama bin Laden and had a chance to bomb Congress while it was in session, or blow up the Kodak Theater while it was crammed with REALLY important people, which would you pick? The Kodak, hands down.

I just sort of wish they’d kept it downtown at the Dorothy Chandler. Hollywood is a neighborhood; lots of people live here. I resent the hell out of it when people whose egos you couldn’t lift with the Space Shuttle have their shindigs right in the middle of real people.

In fact, it occurred to me in Toronto that we ought to set aside a distant island just so the politicians can have meetings there without disrupting the lives of people better than they are. I guess I feel the same way about celebs. Have the Oscars on one of the uninhabited Channel Islands off Santa Barbara. Helicopter them in and out. TV is as close as any of us will ever get to them, anyway.