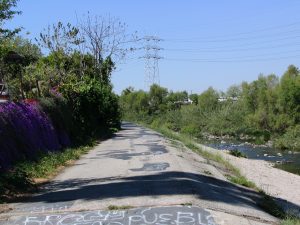 The Los Angeles River is pretty much a joke, especially to people who live in LA. They say that back east there was a river that was so polluted that it caught fire one day. Probably an urban legend.* But it is a fact that, most of the year, you can rollerblade or drive your car on the LA River. You’ve almost certainly seen it in the movies. It played an important part in Terminator 2: Judgment Day (the big truck chase), Repo Man, Grease, Blue Thunder, Point Blank, Grand Theft Auto, Gone in 60 Seconds (the 2000 remake), and The Italian Job (the 2003 version). 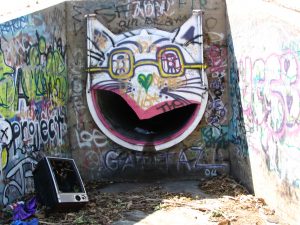 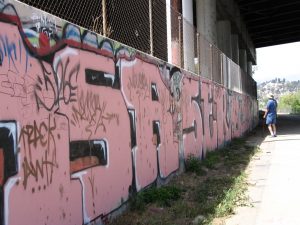 It is also a paintable river, because almost its entire length is lined with concrete. Local taggers and graffiti artists have taken advantage of this, and most surfaces that can be reached are covered and covered again in bright colors from spray cans, and also some surfaces that you just have to wonder how the hell did anybody ever get up there? Taggers are a determined bunch. 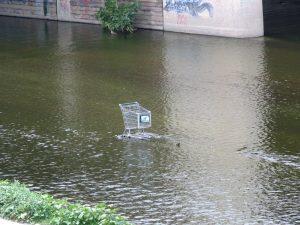 It’s the place where old shopping carts go to die, where the homeless, the hapless, the helpless, and the hopeless set up camps under the thundering bridges of the Golden State, Pasadena, Glendale, and San Bernardino freeways. People say don’t go there, it’s full of gangbangers and drug addicts and they’ll probably kill you … but the fact is it’s not easy to get there at all, even if you want to, which probably not one in 100,000 Angelenos do.

It was not always thus. The river was certainly no joke to the Gabrieleno Indians, who relied on it and the San Gabriel River for survival back when the LA basin was a semi-desert, though they certainly had different names for the rivers, and of course didn’t call themselves Gabrielenos but the Tongva people before the Spaniards arrived to enslave them in the name of Christ.

As late as the 1930s the river was a wild one, nearly dead in summer, overflowing its banks during the short rainy season. You couldn’t even be sure where it was going to go. The San Gabriel used to flow into the Los Angeles, but they both changed course many times. Now they are separate streams. Back then Los Angeles was basically a sleepy little town with one glamorous industry: the movies. There was open space between communities like Glendale and Pasadena, and lots of space between LA and Long Beach. Instead of freeways, you got around on the red cars, which connected all the little towns. The San Fernando Valley was solid orange groves. (For an evocation of this era see Chinatown. The dry river scene was filmed in Tujunga Wash, because none of the LA River looks like that anymore.)

But with the arrival of aqueduct water Los Angeles was growing, and the river kept flooding in the winter. In 1938 there was a very bad one, and the Army Corps of Engineers was brought in to solve the problem. They did, in typical Army fashion, with a lot of earth movers and a lot of concrete. Now it’s under control, but it’s pretty ugly. 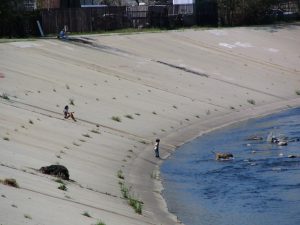 We were casting around for an idea for another epic adventure, like our walk on Sunset Boulevard from Olvera Street to the sea last year. We tried Wilshire Boulevard, but couldn’t get enthused about it. Then Lee suggested we walk the LA River, based on the book Rio L.A. by Patt Morrison with photographs by Mark Lamonica given to us by our friend Random Turner-Jones.

I thought she was nuts. I’d seen the river, of course, everyone who lives in LA sees it from time to time, almost always from a car as they speed over one of the many old bridges or, every once in a while, from the freeway. I knew what it looked like, and it didn’t seem promising. It seemed to be surrounded by cyclone fences everywhere I’d noticed it at all. Could you even get to it?

Well, obviously you could, about a million taggers had made it down there one way or another, but I wasn’t enthused about finding a gap in the fence or climbing up or down steep dirt slopes. But we started looking into it. I was helped by Google Maps and Google Earth, where I could peer down from a satellite and tell a lot about the topography, things that don’t appear on a normal map. I found some places where you could get close, park your car, and then see what’s what.

We decided to start at a point fairly close to our place, so we went up Los Feliz to the entrance to Griffith Park and turned right on Riverside Drive at the place we think of as the Bridal Fountain, because most days there are rented limos and a group of (usually Hispanic) people in gowns and tuxedos getting their pictures taken by the white rose bushes …

But that’s for Part Two. I wasn’t going to write about this great adventure, but as we’ve progressed it seemed more and more interesting so I’ve decided to chronicle it here, after we’ve been at it for 8 days (not every day; we aren’t that idle) as I write this. So I will go back to the beginning, and you are welcome to follow, if you don’t mind graffiti and busted-up shopping carts and homeless people.

Don’t be discouraged. There is other stuff, too, some of it surprising.

*NOT an urban legend, as two kind readers have informed me. It was the Cuyahoga River in Cleveland, and it caught fire more than once.