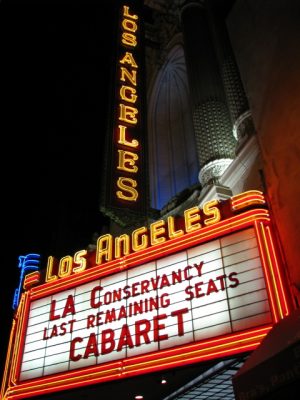 Awhile back we had an eventful 10 days. First, we joined the Los Angeles Conservancy, an organization dedicated to saving what scraps of history remain in this town after the developers have been tearing stuff down for 50 years. It’s too late for the historic Ambassador Hotel, as seen in The Graduate and almost 100 other movies, the place where Bobby Kennedy was assassinated by that little piece of shit, Sirhan Sirhan (who is still whining about parole!). It was torn down by the LA Unified School District, if you can believe that. It’s too late for many other things, but it’s not too late for everything.

The LAC sponsors a program every summer called Last Remaining Seats, in which for six consecutive weeks they screen classic movies in the last remaining movie palaces on Broadway, downtown. They sell out pretty quickly, as none of those theaters are actually in operation anymore, and this is just about the only way to see the fabulous interiors. Plus, the shows are fun! I’d like to have gone to all of them, including:

Pandora’s Box, one of the great silents, directed by G.W. Pabst and starring Louise Brooks, accompanied by the Orpheum Theater’s Mighty Wurlitzer organ.

A Streetcar Named Desire, at the Los Angeles.

The Sting, at the Orpheum.

All these shows have programs of some sort before the movie begins.

We couldn’t see them all, so we chose two. The first was:

Buck Privates (1941), starring Abbott and Costello, at the Million Dollar Theater. We were knocked out by the grandeur of the place as soon as we entered the theater. It is vast, seating a couple thousand people downstairs and in a huge balcony. It was built in 1918, the first of Sid Grauman’s three Los Angeles movie palaces (the later ones are the Egyptian and the Chinese, in Hollywood), and was reputed to have cost one million dollars … a huge sum in those days. He certainly got his money’s worth. The architecture is described as Churrigueresque, which is a mouthful that seems to mean “Toss a lot of ornate styles into a blender and see what comes out.” The outside features things like longhorn skulls and many statues, and the interior is supposed to tell a story, but it’s too complex to easily decipher. They showed movies there until the late forties, when it became the premiere venue for Spanish-language performers, and played host to all the biggest acts, people like Cantinflas (which is probably the only name of those marquee performers I recognize). This seems appropriate, as Broadway these days is about 95% Hispanic in character. The theater is showing its age here and there, and the lobby was criminally re-done and “modernized,” but a friend of ours, Don Solosan, showed us some pictures of the old murals above the dropped ceilings, which are slated to be restored.

The night’s program began with News of the Day: Cavalcade of 1941, which, as you would expect, was a recap of all the horrors of that year in London and at Pearl Harbor. Then they recreated a radio show, a time machine back to 1941 (actually, more like 1942, as much of the material referred to our fighting men overseas). The show featured Dean Mora and The Ft. MacArthur Officers Orchestra plus the Satin Dollz pin-up dancers, with Master of Ceremonies Maxwell DeMille. The band was very good, playing many of my old favorite swing numbers, and the seven tap-dancing ladies were nicely turned out. It was a great evening.

A week later we attended the showing of …

Cabaret, at the Los Angeles Theater. (Click here for a time-lapse video. Thank you, Don Solosan!) This was the last of the big LA movie palaces, built in 1931, and if you thought the Million Dollar was fabulous … well, as Jolson said in The Jazz Singer, you ain’t seen nothing yet! It’s one of those things that really can’t be described very well, like the Grand Canyon: It’s a big hole in the ground, but it’s the details that matter. Of all the theaters I’ve ever seen—and I’ve been in some biggies—only the Pantages on Hollywood Boulevard can compare to the Los Angeles. From the moment you walk in the door you are confronted with a towering six-story lobby that might seem more at home in the court of Louis the Sun King than on Broadway in Los Angeles. Crystal chandeliers, drapes, columns, and at the top of a stairway, a fountain of crystals and mirrors. Inside, the theater curtain shows scenes of western pioneering, and the figures of people are wearing real clothes, and have real wigs. Sounds silly; looks fantastic. And there is a whole world down below, too. There’s a ballroom (I’m not making this up!), and meeting rooms, mirrors all over the place, a huge snack bar (not operating). In the men’s room are marble seats for shoeshines. The ladies’ branches off to the left to a “cry room” that looks like a circus tent, where mothers could watch the movie with their infants, the picture shuttled down there by a series of prisms. Guys were visiting this room. To the right, where gents were forbidden, the story was that each toilet stall was made from a different kind of marble. No detail was overlooked when they built this place! 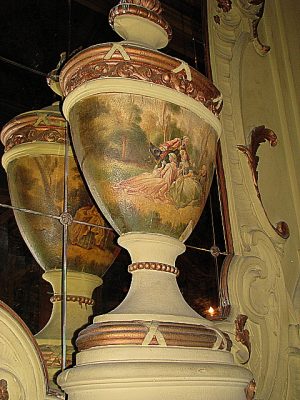 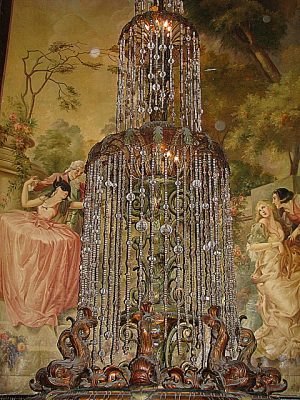 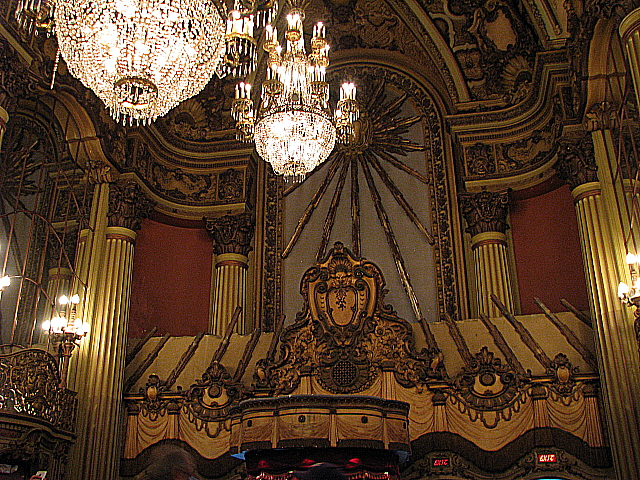 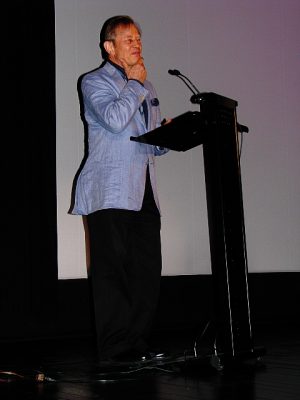 Before the movie we were entertained for about 25 minutes by … Michael York! He is looking very good at 67. He’s a resident of Los Angeles and a supporter of the Conservancy. He had some stories about the casting and making of the movie. And then, on with the show, one of my top 5 musicals of all time. Quite a night.

Only a few days later, on a Saturday, we had our busiest day yet. The Jules Verne Festival screens classic movies in LA and Paris several times a year, hosted by someone with a connection to the movie. Coming up later in the year will be 2001: A Space Odyssey (which I’d love to see again on a big screen), hosted by Keir Dullea, and The Birds, with Tippi Hedren. But today was a double feature at the Million Dollar. At 2:30 they were showing Houdini, and at 7:30, Some Like it Hot. What do those movies have in common? Why, Tony Curtis, naturally! 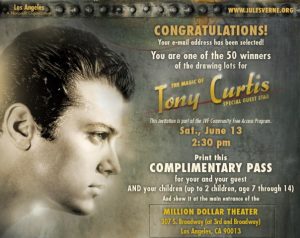 Arriving at the theater, we saw that the sidewalk had been roped off and there was a red carpet. Parked along the curb were several vintage cars, and more arrived as we stood there. A friend told us that, yes, Tony would be arriving out front, so we stuck around and soon enough a Model-T pulled up and Mr. Curtis got out. He was wearing a white cowboy hat and as he left the car it was dislodged, and I saw he was bald as a beach ball. He looked, in fact, not good at all. Well, he’s 84. He’s still walking, but slowly. He seemed to really enjoy the adulation of the crowds, immediately picking out two of the prettiest ladies there and leaning on them for support as he signed autographs. I got some pretty good pictures of him out there. 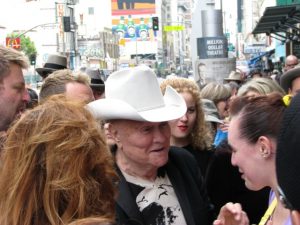 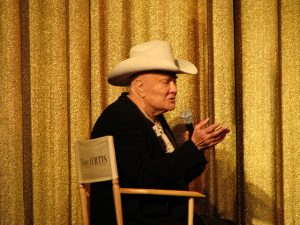 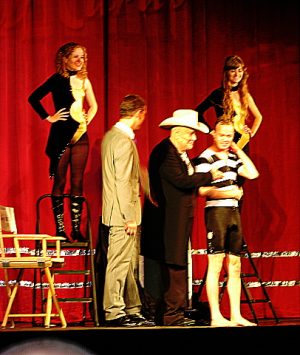 Inside, the highlight of the afternoon was a performance of Houdini’s water escape by Curtis Lovell II—in its classic form, known as the Chinese Water Torture, a trick that did not kill Houdini, no matter what we were about to see in the movie. The main thing you have to be able to do to pull it off effectively is to hold your breath for over two minutes, which is possible, with training. In fact, there are some who can do it for three minutes. (On a good day, I figure I could do forty-five seconds.)

Between shows there was a reception with Tony, but it cost $50 each, so we skipped that and had our dinner elsewhere. We returned for the showing of Some Like It Hot, where Tony was interviewed more extensively. I talk about some of that in my review of the movie.