Annette Bening Gets a STAR 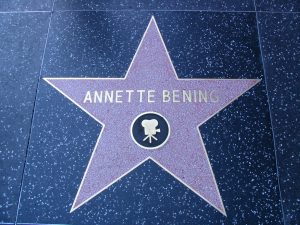 I always wanted a family so when I got to be a grown-up in the movies, I found my husband, and he’s the person I’m the most grateful to, because he makes moments like this take on the proper perspective. I love my work, I love my craft, and I feel that’s a journey I’m still in the midst of.
~Annette Bening

Since this was our fourth one of these, we’d learned our lesson. The real paparazzi have press credentials and get a special area, where they buzz and flutter and do their razzi thing away from the hoi polloi. Being tres polloi ourselves, we are always behind and to the side of the pros in a separate fenced-off area. The crowd is usually about five or six people deep, which is a wall of humanity for Lee. But we’d seen a couple wise guys with those folding three-step ladders that are easy to carry and have a bar on top, like you’d use in the kitchen. So we bought one for $30 and I carried it and set it up … and we found we could easily have made our money back and maybe a small profit by charging a buck or two to let tourists climb up and snap a few shots! Not being mercenary like that, we let a few folks get up there out of the kindness of our hearts … after we’d taken all the shots we wanted.

The ceremony was running late, and Johnny Grant, the “Unofficial Mayor of Hollywood,” who presides at all these things (fairly badly, in our opinion, as he is prone to exhort the crowd to more applause when they give some “celebrity” a lukewarm reception, just adding to the embarrassment), said that Annette and Warren were stuck in traffic. Which they were … and then they did a classy thing. Rather than keep everybody waiting, they got out of their limo a block away and walked down the street together and around the crowd barriers to the podium. They passed about five feet from me (and of course I wasn’t the one with the camera), Warren Beatty in an ice cream suit, Annette Bening in white. 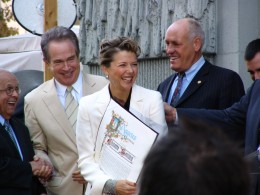 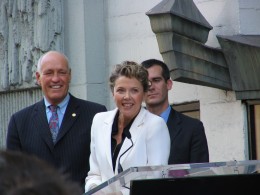 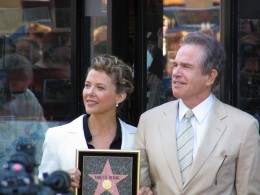 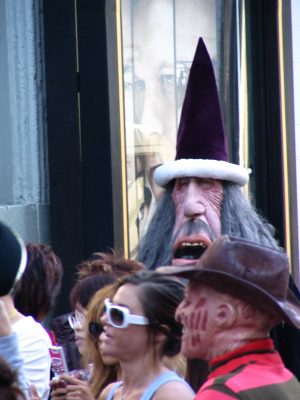