Another One Bites the Ice

You may have seen the viral picture of the traffic jam a few days ago, nearing the summit of Mt. Everest (Known in Nepalese as Sagarmatha, in Tibetan as Chomolungma). What you are looking at is a picture of about a hundred morons … minus the Sherpas, who climb to make a living. If you are on Everest these days you are, by definition, a moron. 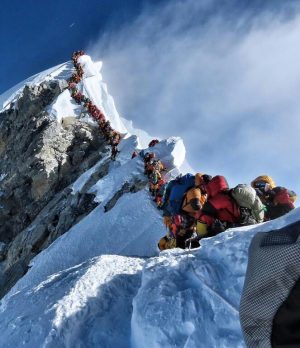 You don’t think so? You think they are “brave adventurers?” Sure enough, when they get back home the hometown paper and TV stations will run stories about them, and describe them as somehow heroic.

When I say “get back home,” it can mean that most of them came back. Some of them left some important bits up there, things like toes, or feet, or fingers, or legs, or arms, or noses. Or IQ points. Chomolungma can inflict brain damage. If Old Man Sagarmatha doesn’t get all of you, he is content to chip away at you.

So far this year eleven people have died in what climbers laughingly refer to as the “Death Zone.” When I started writing this it was ten, then a 62-year-old Boulder, Colorado, lawyer died … on his way down. I’m not going to mention his name. I don’t want to glorify his “tragic” death any further.

Any altitude above 26,000 feet is simply uninhabitable for human beings. Everest is 29,029 feet. If you stay up there beyond a certain time, you will die. That time varies according to what kind of shape you are in. Some of these intrepid mountaineers should never have gone above the height of Pike’s Peak (known to the Arapahoe people as Heey-otoyoo!), alt. 14,115 feet. You can drive to the top. In 1961 my family did that. Highest point I have ever been, outside of a plane. I got a nosebleed. That was the end of my mountaineering days.

Still have trouble with me describing them as morons? Consider this: They all knew about these human gridlock conditions before they got on the plane for Katmandu. They knew that people were waiting three, four, five hours for the traffic to move on so they could have their pitiful little moment taking a selfie at the top … along with a group of twenty rude Chinese, pushing and shoving. (I’m not being racist; several people mentioned these summit-hogs in their accounts.) To get there, you must not only wait in line, you have to literally walk over the frozen corpses of previous morons.

The dead bodies are way points on the climb, gruesome trail markers. They even have names: The German Woman (Hannalore Schmatz), Green Boots (possibly Tsewang Paljor, no one is sure), Sleeping Beauty (Francys Arsentiev). “Oh, sure, when you get to Green Boots make a hard left up the slope to Sleeping Beauty.” 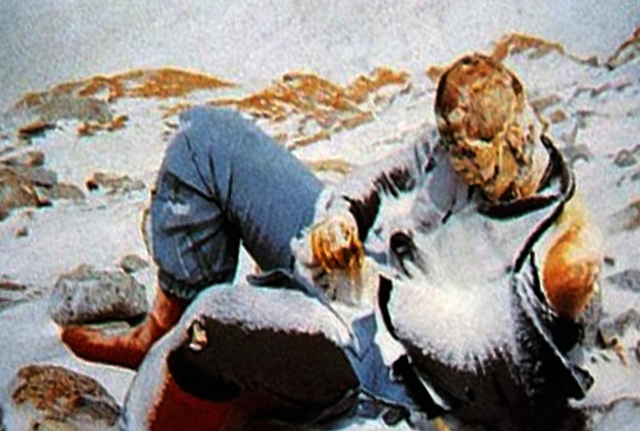 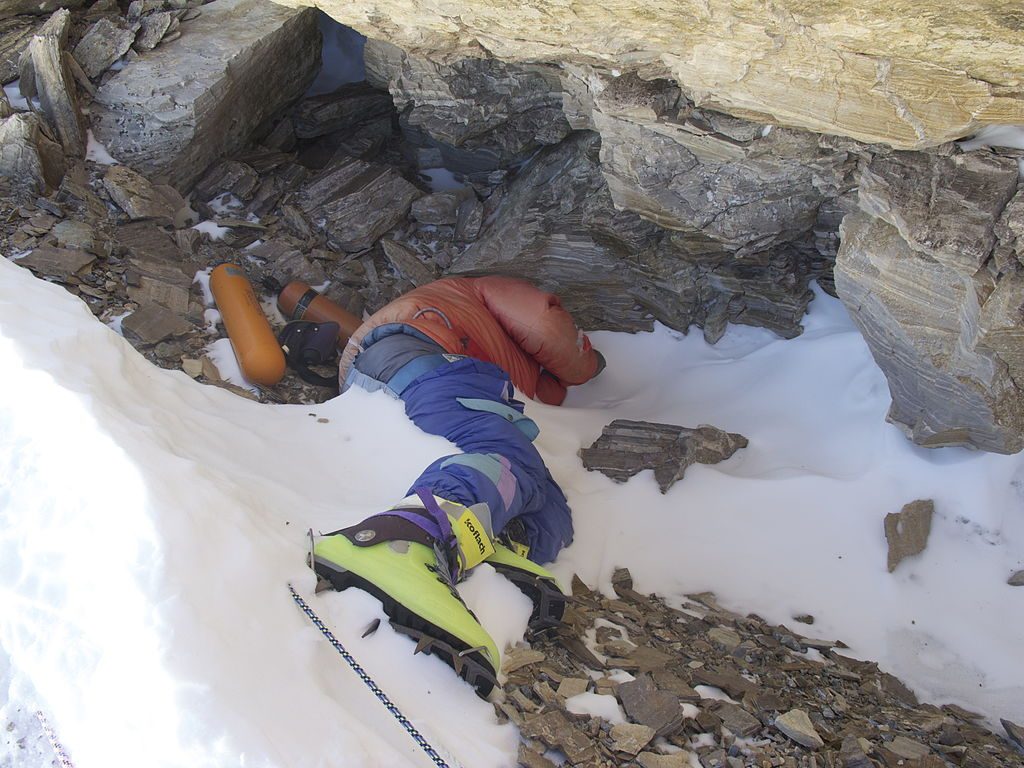 Then, once up there, getting down involves threading the needle of morons still heading up the mountain. Does that picture look like there’s a lot of room to get by? Do you think any of those morons who paid $100,000 for this bottled “adventure” are eager to get out of your way?

I say $100,000 (you can easily spend much more than that), but these days there are what I think of as “Motel 6” companies that offer to get you to the top for as little as $20,000. Shit, you can spend more than that taking a family of four to Disney World for a week! The hundred-grand-and-up crowd stay in what are almost luxury resorts at Base Camp. I don’t think the accommodations, or more importantly, the guides, are quite as good for the Motel 6ers.

The poster child for this sort of lunacy is an asshole named Beck Weathers. “Left For Dead On the Mountain!” His companions figured he was a goner, though he was still breathing, one of the eight people who did die that day. Someone wrote a book about him! They made it into a movie, Into Thin Air. Then they made another movie, Everest. Beck was played by Josh Brolin.

They made it seem somehow heroic to make a pointless trek into the Death Zone and lose most of one arm, all the fingers on the other hand, parts of both feet, and your nose. I’m attaching a picture. Look at the hero! He’s a doctor. Luckily for him he is a pathologist, so he didn’t really need those hands, anyway, right? He’s a motivational speaker now. God help you if he motivates you to pursue your dreams like he did.

I guess this seems like a lot of bile to spew over something that really isn’t all that important. I mean, aside from their families, who is affected by the deaths of these eleven people? It just pisses me off no end to see morons like this glorified.

I guess that picture got to me, as it did to so many others. This is what our planet has come to. The first stage of the climb, known as Base Camp, where everyone pauses to acclimate as best they can, is drowning in garbage. Last year 25 tons of trash and 15 tons of shit (I mean literal shit, which is dumped at the bottom of a glacier) was hauled out, by Sherpas, because the climbers themselves can’t be bothered … and it was only a small fraction of what’s up there. The trail to the top is choked with discarded equipment, candy bar wrappers, and corpses.

When Tenzing Norgay and Edmund Hillary did it, it was awesome, something that was thought to be beyond the limits of human endurance. Now, up to 234 people reach the top in one day. People have made it to the top with one arm, no arms, one leg, no legs, one lung. Hemophiliacs have made it, as well as diabetics and blind people. They have summited with cystic fibrosis, multiple sclerosis, Hodgkin’s disease, and Crohn’s disease. I’m sure it was satisfying to those folks. It shows that the disabled “can do anything if they set their mind to it!” Which is pure bullshit.

What do I want to do about it? Absolutely nothing! I am a firm believer in the right of people to risk their lives doing any damn fool thing they want to. Lots of people are pressuring the governments of Nepal and Tibet to cut down on the number of climbing permits issued every year. I don’t think they should. Keep issuing them, and more, for all the traffic will bear. I love it when wealth flows from people with too much money and into the pockets of people who work for a living. The local guides and outfitters need the cash, which comes to many millions per year.

The only thing that I really object to when one of these morons gets himself or herself in trouble, whether it be on Everest or doing some other damn fool thing in any wilderness, is the cost of rescuing their stupid asses. The money such a rescue costs is only part of it. Sometimes there is a cost in human lives. People have died trying to pull “adventurers” to safety. 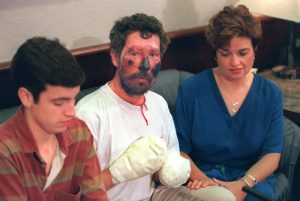 Take Beck Weathers, for instance. When they finally realized he was still living it was clear that if he didn’t get to a hospital very soon he would die. But he was way beyond the safe limit for a helicopter. Yet a pilot in the Nepalese army risked his life in a stripped-down chopper to reach 22,000 feet and take Weathers away. This man was Colonel Madan Khatri Chhetri. You want a “hero?” There he is, right there. Everest should have been made about him, not the foolish man whose life he saved. 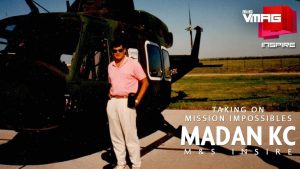 I will give Dr. Weathers one thing here. He agrees with me that Col. Chhetri is the hero.

I do have a suggestion for anyone who is thinking about making the climb. Don’t be a moron! If you plan to stand in a line for five hours, why not go to Disneyland? Their largest expansion ever, 14 acres of Star Wars: Galaxy’s Edge, opened yesterday. Lines at least that long are anticipated. You won’t freeze your feet off, and you’ll have a cool ride in the Millennium Falcon at the end!