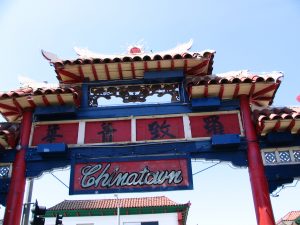 No disrespect to Mr. Chavez, but I don’t think they should have changed the name of part of Sunset Boulevard to Cesar E. Chavez Avenue. This is a general principle with me, not changing the names of well-established streets, buildings, or places. (The only thing worse is to name something like that after somebody who is still living.) I was opposed to Cape Kennedy (though I like The Kennedy Space Center at Cape Canaveral). I didn’t like it when they re-named Union Avenue in Portland to Martin Luther King Jr. Boulevard. Sorry, I just don’t like it. Commemorate these people with something new. 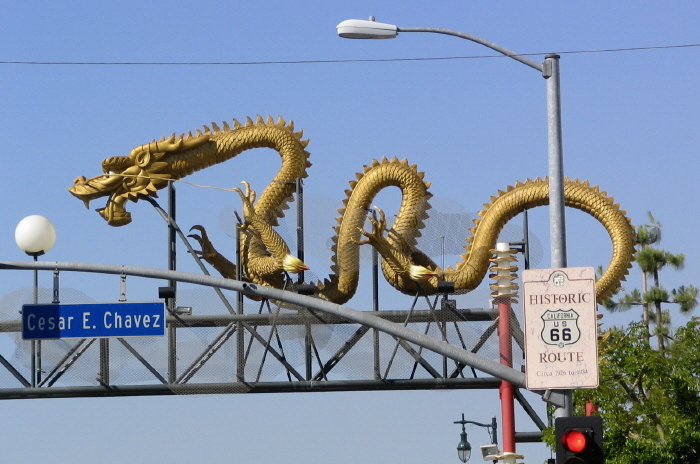 Sunset used to become, believe it or not, Brooklyn Avenue when it crossed the river. (You know, the Los Angeles River. You’ve seen it used in a hundred car chases. It’s basically a wide, deep, concrete ditch that is usually dry as a desert … except in the rainy season, when you see why it has to be so wide and deep.)

Brooklyn Avenue went through the heart of Boyle Heights, East Los Angeles, which has been a predominately Hispanic neighborhood for a long, long time. (See My Family, one of our favorite films, for a good picture of its history.) I’m still opposed to the idea of re-naming streets, but if you’re going to do it, that’s a logical one. Brooklyn doesn’t have much to do with the lives of the people who live in Boyle Heights.

And they did do that, it’s now Cesar Chavez … but they added on the eight blocks on the other side of the river, and that makes very little sense. Yeah, it borders Olvera Street and passes through the site of El Pueblo de Los Angeles, the oldest part of the city, but what that stretch of street mostly is … is Chinatown.

Anyway, we decided we were going to ignore the edict that changed the name, and treat that part of CC Avenue as what it used to be: the beginning of Sunset Boulevard. So for our second day we doubled back and walked it. 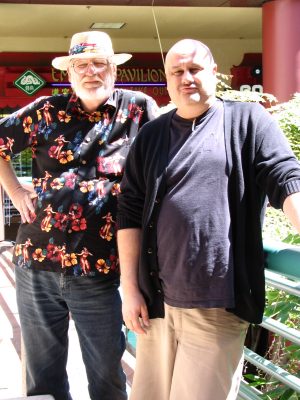 Conveniently, we were meeting our friend Random (not a typo) Taylor-Jones for dim sum at the Empress Pavilion on Hill Street. So we took the Red Line to Union Station, switched to the Gold Line, and got off at the first stop, which is Chinatown.

Los Angeles Chinatown isn’t much like Grant Street in San Francisco. There aren’t a lot of shops with pressed ducks hanging in the windows. The streets are broad, and flat. There are a hundred tiny shops crammed full of stuff and spilling out onto the sidewalk, sure, and a lot of Chinese people, but that’s about it. It’s not crowded. The Empress Pavilion is on the second floor of a Chinese mall. It’s a huge room full of rattling, steaming carts, and I understand that most days you may have to stand in line for a while, but that day we were shown right in and seated at a window. I thought the dim sum was excellent, and the company was great. Thanks, Random. 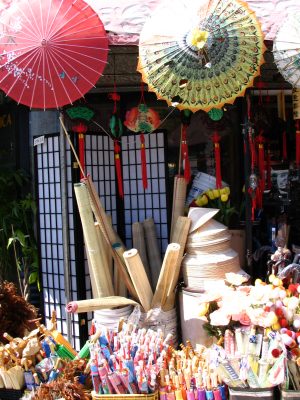 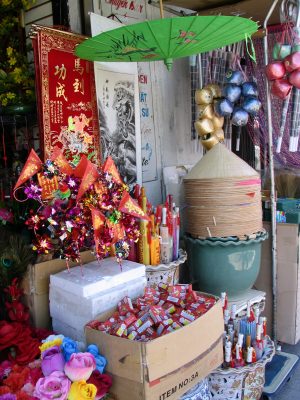 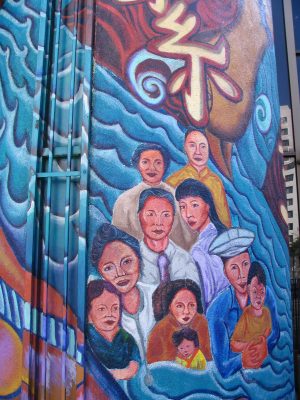 We went down Broadway, the main street of Chinatown, until we reached old Sunset, and started up the hill. 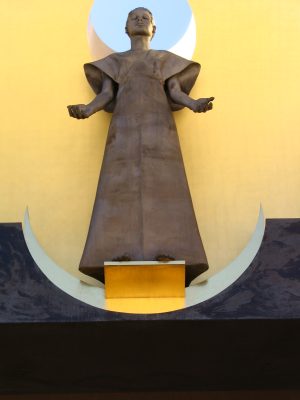 Not much to see on this stretch of street. There’s construction, empty lots, and not much else. So when we reached BBQ King we turned around and when we hit Grand Avenue we turned south and went up the hill to the Cathedral of Our Lady of the Angels. Nuestra Señora de Los Angeles.

It’s big, I’ll give it that. It seems to have been designed by the same people who did the Vehicle Assembly Building at Cape Canaveral, only in concrete instead of aluminum siding. Not what I’d call an architectural triumph.

The 151 million pound Cathedral rests on 198 base isolators so that it will float up to 27 inches during a magnitude 8 point earthquake. The design is so geometrically complex that none of the concrete forms could vary by more than 1/16th of an inch.

The Cathedral is built with architectural concrete in a color reminiscent of the sun-baked adobe walls of the California Missions and is designed to last 500 years.

Yeah, good idea taking earthquakes into account, since that’s what finally did in the old one. And adobe-colored? Yeah, I can dig that. But … 500 years? 500 years?

This first Roman Catholic Cathedral to be erected in the western United States in 30 years began construction on May 1999 and was completed by the spring of 2002.

Okay, so we’ve got a big barn of a cathedral, built in 3 years, expected to last 500. I realize this is the 21st Century … but how does that stack up, in the world of cathedrals?

New York’s St. John the Divine, the world’s largest Gothic cathedral, has been under construction for 118 years (and may never be finished). In Europe, it often took 500 years to build a cathedral, and as for how long they expected them to last … well, forever, as they understood the term. They expected that when Gabriel blew that last set, when the tromp of doom finally stomped, their creation would still be there. If it were to be destroyed, it would be in the battle of Armageddon.

I’m not putting it down completely. The interior is tasteful, there are some very nice tapestries … but no stained glass, and if there are Stations of the Cross we couldn’t find them. No … actually, I am putting it down completely. It has no soul. I didn’t feel even a scintilla of the awe I felt (and I’m not Catholic, not Christian, not a believer of any kind) in St. Pat’s or St. John’s in New York, or Notre Dame in Paris, or the cathedral in Metz, the only other cathedrals I’ve visited. It seems a shame to have spent all that money for so little result. I find myself wishing they have to mortgage it to pay for all the child molestation lawsuits the Archdiocese currently faces. 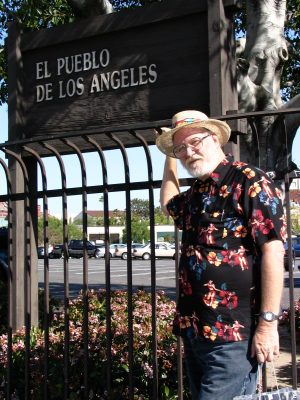 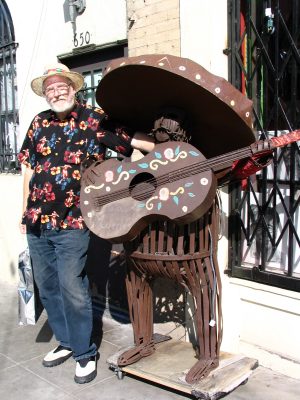 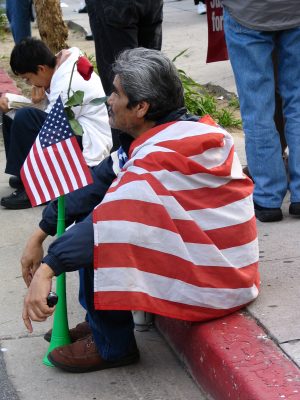 So back down the hill and eastward, to the Pueblo and Olvera Street. We’ve never been inside the Pueblo, it always seems to be locked up when we go there, and Olvera Street is a tourist trap, plain and simple, but we love it. It’s narrow, with dozens and dozens of shops and booths crammed into one small block. There are three decent restaurants (though overpriced) and a bunch of taco stands. You can get good deals on Mexican blankets, and not much else. At the other end is a circular plaza where there’s always music, and that day some sort of festival was going on, with a bunch of people in bright, fancy Mexican costumes. Nothing like the huge crowd the last time we were there, protesting the US immigration policies. I’d seldom seen so many American flags being waved, along with the flags of just about every other country south of the Rio Grande. We were there to witness the march, but like the war protest we attended a while back, they couldn’t stop talking! And talking and talking and talking … Lee said “How many ways can they say ‘We’re all Americans!’?” About 1000 ways, apparently, none of them true, as it was evident that at least half the crowd were illegals. And, sorry, folks, I appreciate your plight, and I don’t know what to do about it, but you’re not an American until you’re sworn in. 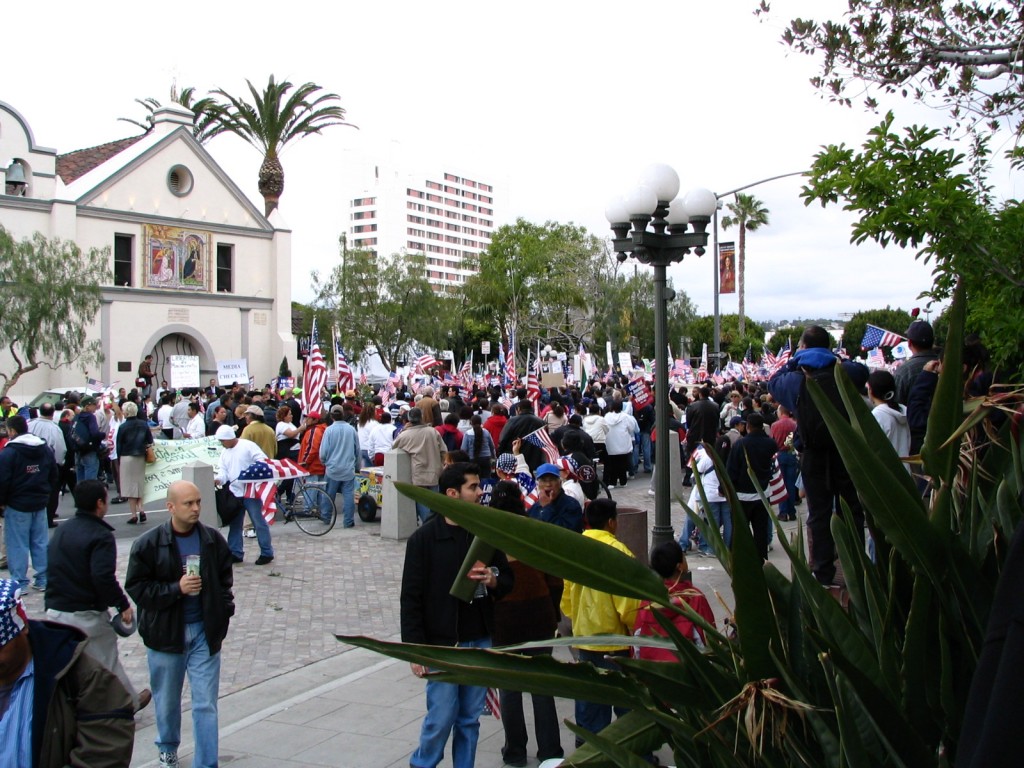 And so ends the second day of our marathon trek.