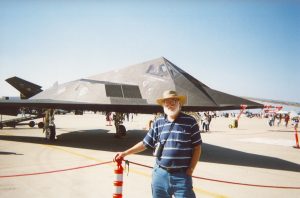 Lee’s been working hard on the website, going back over the old postings and updating the links, adding stuff from our boxes and boxes of albums and loose photos. But here and there she decides she needs a new picture, so we took off for Lompoc to fill in some of the gaps. You can see that day’s work at the VarleyYarn titled “The Great Mardi Gras Temperance Disaster.” 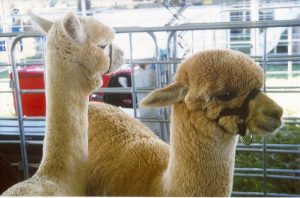 On the way back we stopped at the Fess Parker winery to take another picture, and came across an alpaca fair. Several hundred fuzzy animals, a bit smaller than llamas, and their besotted owners, and tables full of stuff made from alpaca wool. It’s about the softest stuff in the world, I guess. If you close your eyes and move your hand toward an alpaca’s back (I tried this), you can’t tell when you start feeling it, it’s that fine.

It was the day before Halloween, and all the exhibitors had bowls of candy. I ate too much.

During our drive I saw a sign for an air show at Vandenberg, Oct. 30 and 31. I decided I’d like to go, as much to get onto the base, where I’d never been, as to see the show. But the next morning Lee was having problems with a pinched nerve or strained muscle or something, that had been getting worse for days. On Halloween she could hardly walk. I decided to go on without her.

Post 9/11, military bases all make at least a gesture at security, even though at most of them thousands come and go every day. They checked my driver’s license at the gate and waved me on. The parts of the base I saw, following the MPs stationed along the route to the parking lot, looked like a college campus and a housing subdivision. Lots of homes not dissimilar to ones you’d see for civilians, and dorm-type structures named after the old rockets of my elementary school days: Atlas, Jupiter, Thor, Matador. 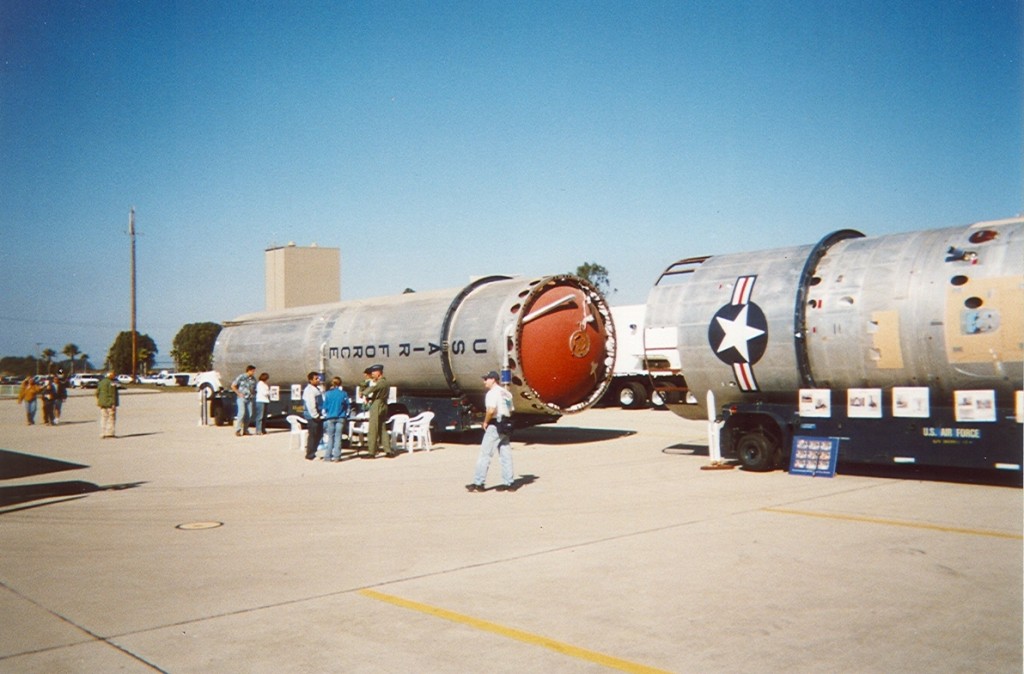 I was directed to the big concrete parade ground, where there were lines of yellow school buses that loaded us up and took us over the vast base, about a 20 minute drive, and dumped us by a large hangar. Several old biplanes were already buzzing around, trailing smoke, doing aerobatics.

The star of the show was front and center, surrounded by yellow tape and patrolled by three very serious-looking fellows carrying very serious weapons: an F-117 Nighthawk Stealth fighter. I had hoped it would fly, but was told it was static display only. Well, the thing wasn’t designed for fancy flying, anyway. It couldn’t fly at all without computer guidance. The names the pilots give this plane tell you a little about how it flies: the Frisbee, and the Wobblin’ Goblin. 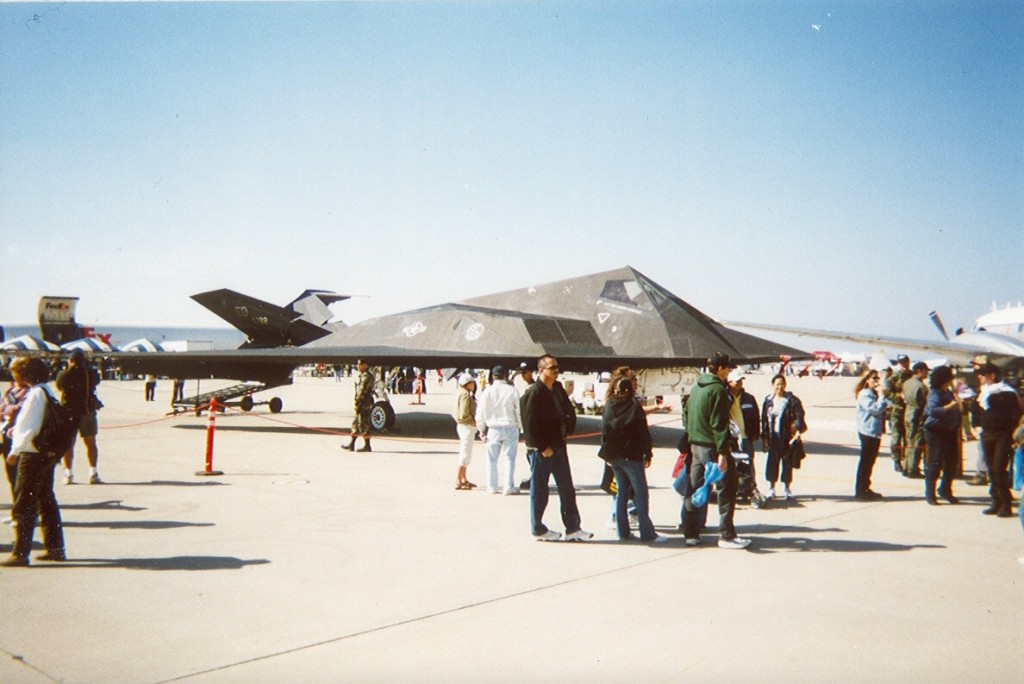 Even now, all these years later, I still can’t get over how that beast looks. Sheer science fiction. The last great aviation coup of the fabulous Kelly Johnson’s Skunk Works.

I grab our old faithful Canon Photura camera, the barrel-shaped thing that most people assume is a videocam, to snap a few pics … and it dies. Nothing, no zoom in or out, no snap, just … dead. It’s got a fairly new battery, and later we found the rewind motor worked, so we salvaged the 14 pics in it. But we probably won’t get it fixed anytime soon, as we plan to go digital this weekend.

So here I was at Vandenberg, staring at an F-117, with no camera.

It was half an hour later that I stumbled on a souvenir booth that had three (overpriced: $10!) throwaway cameras left. I grabbed one. Thus … for this one VarleyYarn the photo credits go to John Varley instead of Lee. Except for the two where I persuaded a stranger to take my picture. 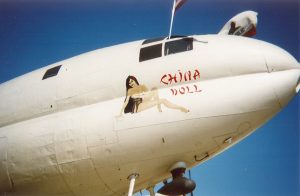 After the Stealth, the most interesting plane there was a Curtis-Wright C-46 Commando cargo plane named “China Doll.” I’m a bit proud of being able to name it, since there was no sign of any kind concerning the plane. I didn’t know what it was. But when I got home I googled around a little and found a picture. Then I typed in “C-46 China Doll,” and there was a picture of the plane itself. Ain’t the Internet wonderful? 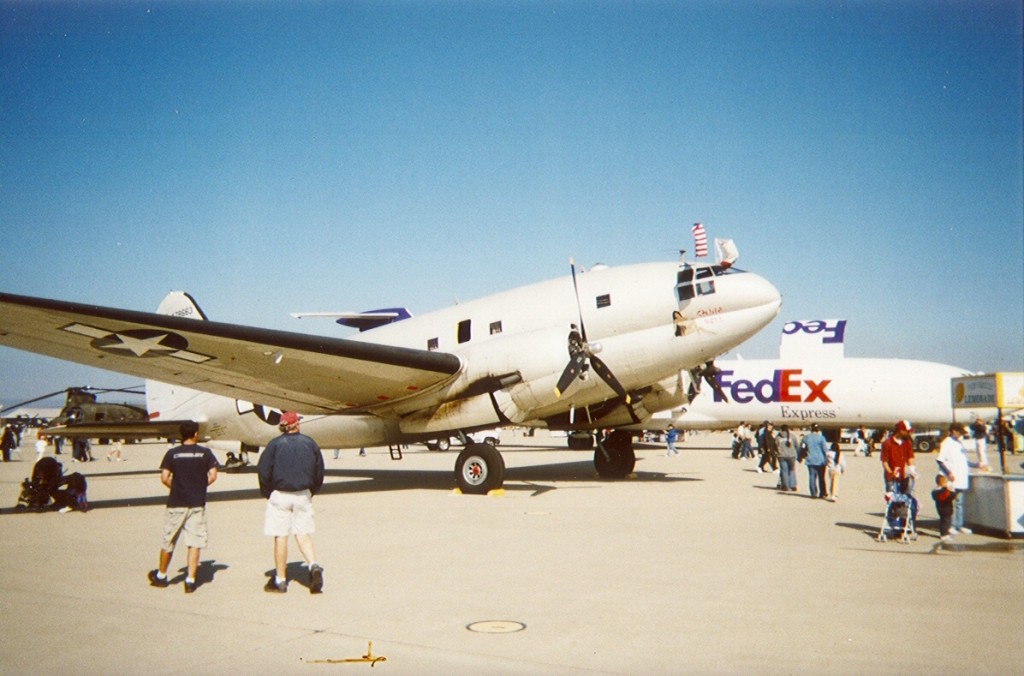 The day’s really interesting stuff got under way with the take-off of an F/A-18 Hornet, the plane the Blue Angels fly. It gets in the air very fast, comes along the flight line level at about twenty feet, then stands on its tail and goes straight up until it is almost out of sight. A display of raw power that never fails to awe. 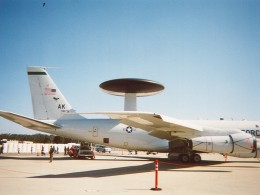 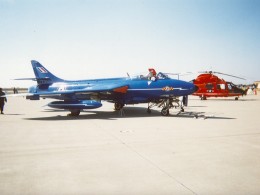 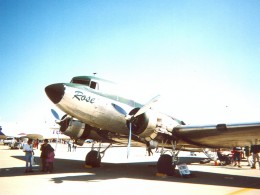 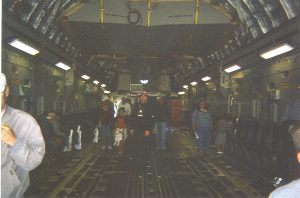 Then there was the C-17 1B Globemaster, which was open for walk-throughs. I remember one day at the little Mid-County Airport in my hometown of Nederland, Texas, when an old (not all that old, then, I guess, but certainly an antique now … like me) Fairchild C-119 “Flying Boxcar” came by and was opened to the public. I went in and walked around and remember thinking it was pretty damn big inside. 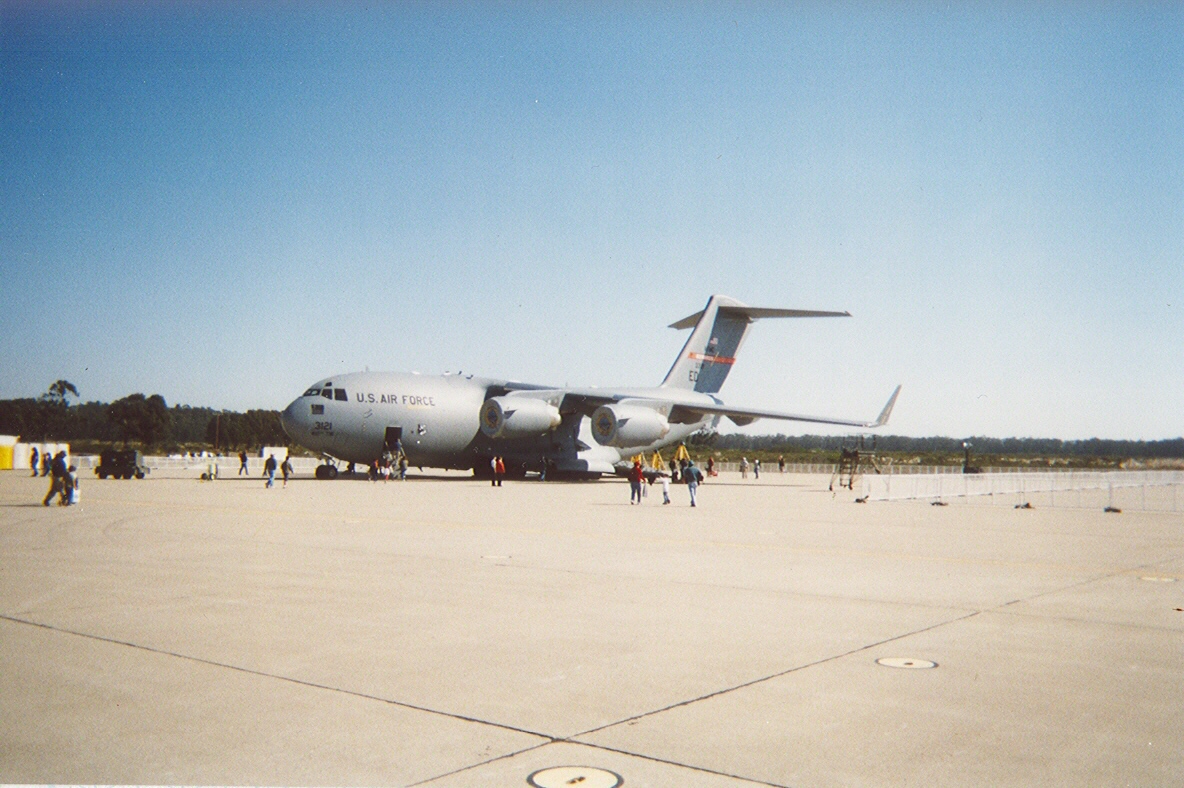 If you chopped off the wings, you could have fit the entire C-119 inside that C-17. You could play a pretty good game of tennis in there. Well, badminton, anyway. 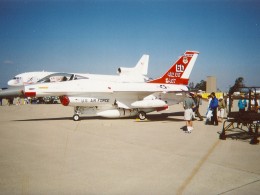 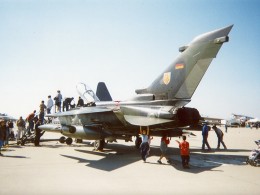 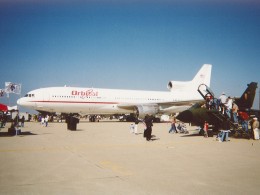 There was a cherry B-17 on static display, and my personal favorite of the W.W.II bombers, the B-25 Mitchell. This is the plane that Yossarian flew from the tiny island base of Pianosa, scared out of his wits every time he took off. When I see a B-25 I always see him up there in the nose, hunched over his Norden bombsight, dumping his bombs as quickly as he could, any which-way, and then grabbing his mike and shouting “Turn, turn, turn, you sonuvabitch, Nately! Turn! Turn! Turn!” 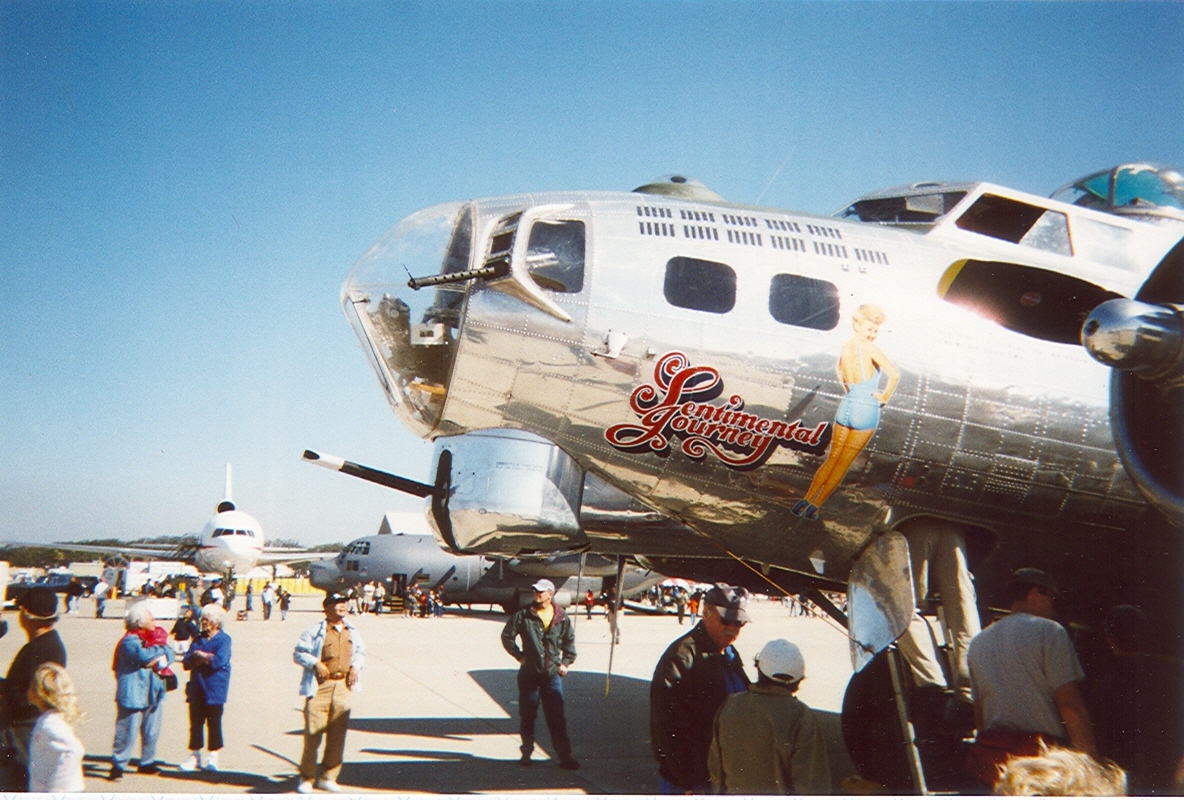 If you’ve ever seen the film version of Catch-22, you might remember General Dreedle’s B-25, the one with the picture window in back and the whitewall tires. Believe it or not, years before that movie was made that very plane was based at the Mid-County airport for a couple of years. We assumed it was owned by some oil millionaire. 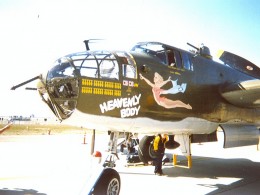 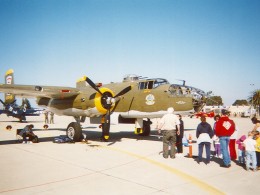 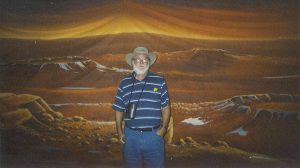 I had intended to stay for the whole show, but it was very windy … and I just don’t have as much fun at stuff like that alone as I used to. I was missing Lee. So I headed for the buses, stopping long enough to go through the hangar where NASA and other aerospace companies and military recruiters had set up displays. I got my picture taken on Mars and watched as children were invited to lie down on their tummies and let an 8-wheeled Mars rover roll over them. The most interesting people there were an outfit called JP Aerospace (“America’s OTHER Space Program”).

They have a hare-brained scheme to build quite large balloons to carry people up to an altitude of 140,000 (about 26 miles) to rendezvous with … get this … 2-mile-wide starfish-shaped balloons called Dark Sky Stations, and from there, transfer to a third inflatable, this one a mile long, which will use flotation up to 200,000 feet, then ion engines to accelerate into orbit. Which will take 5 days.

And you know, I haven’t been able to figure out why it wouldn’t work.