At about 11:13 yesterday morning UPS delivered a package to me here in the RV. I took it inside and opened it, saw it was a copy of a manuscript I’d asked for from Susan Allison at Penguin/Putnam. I was looking at the first page at 11:15 when everything began to shake. Our first thought, it being Condition Orange and all, was “Al-Qaeda!”

Our second thought was:

We stumbled outside (and I do mean stumbled, EVERYTHING was bouncing up and down and shifting back and forth) and tried to find something to hang on to. Lesson number one: there IS nothing to hang on to in an earthquake. That’s what’s so frightening. I put my hands on the hood of the car to steady myself, but the car was moving back and forth as much as two feet. Lee danced around, trying to stay on her feet, and behind her I saw the RV moving even more than the car, and this with the emergency brake set. I kept thinking it ought to make some noise, you know, “It sounded like a freight train going by!” But except for the creaking of the RV springs I don’t remember hearing much of anything. I saw three of the semi-feral cats that infest this park STREAKING off in whatever direction they happened to be facing, wanting to be anyplace but here. I saw tall trees waving back and forth and back and forth like grass in a high wind.

It lasted about 20 seconds (we heard that later; it seemed a lot longer). Everybody in the park was outside, shouting and laughing and generally pumped up with adrenaline, like we were. The guy across from us, who owns a ferret that got away a few weeks ago, ran down the road shouting “See? See? Didn’t I predict this? Was that a great earthquake or WHAT?” When things settled down again, we had our third thought (actually, it was Lee that had it):

From the first week we moved here, we doped out the tsunami situation. We are about four feet above maximum high tide here at Ocean Breeze RV Park. All over this county here are sirens on high poles. You are never out of range of at least one, no matter where you are. (We know, they tested them a few months ago.) Notices are posted everywhere: If you hear a sustained siren note for three minutes or more, head for high ground. Well, we figured that if we waited three minutes we’d better be prepared to swim for our lives, as every street and highway would be jammed in about 90 seconds. So we hurried back into the RV, grabbed our computers, hopped in the car, and lit out. We intended to watch any tidal wave from a great height, not from a car stuck in traffic. We drove up to the mesa just a few miles to the east.

(Oddly enough, on our way out of the park we saw the most dramatic damage we would see all day long. Our street, Pier Avenue, was cracked in several places, making bumps about two inches high, and a concrete drainage channel that crosses the road in front of the nearby liquor store had sunk more than that. We crossed it very slowly.)

We drove around, listening to FM radio, which didn’t seem to have noticed anything had happened. Most of them are pre-taped, anyway. So we switched to AM and found an all-news station where they were hard at work, enjoying the hell out of it all, as most people do in a disaster if they haven’t been hurt or lost their homes. The DJs soon assured us that the epicenter of this quake was under land, and thus would not cause a tsunami. So we relaxed, and drove around a bit. Traffic lights were all out, everywhere. Very few places had power. Employees were standing outside every business, many of them with BIG messes to clean up when they were allowed back inside.

We listened for news of the Diablo Canyon nuclear power plant, which is about 15 miles from our front door. The county sends out maps of where to go if there is some little mishap up there, and the state of Cahleefornia will send you free potassium iodide tablets to take if there is a radiation release. The news came in quickly that the nuke was okay, had never stopped generating. Whew!

We drove up to San Luis Obispo, learning along the way that the epicenter was only a few miles from the Hearst Castle. Damn, I’d hate to hear that gigantic old pile had fallen down. We soon learned that it was just fine. The lady who designed and built it had used concrete, and apparently they didn’t even lose any roof tiles. We heard of big boulders in the road on the Cuesta Grade, north of SLO, so we didn’t go any further. Power was out here and there in the town. We turned around and went home. 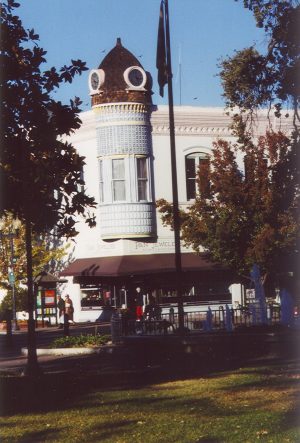 I’m sure you’ve all heard by now that most of the damage was in Paso Robles, where we lived for a month a year ago. It is a great old town, full of historic buildings. We had been in most of them during last year’s Xmas celebration, when downtown had a big open house with free food and carolers and so forth. We had loved the old clock tower of the building that collapsed. Gone now. I’m sure there will be a lot of retro-fitting in the months to come.

We got home to find that our power was still out. Also water. Also gas. We walked down the street to Pier Liquor, run by a sweet little man named Raj, from Gujurat state in India. What a mess! Behind the counter were rows and rows of booze bottles, and about a third of them were now on the floor, many of them broken. Stink? Believe it. And he couldn’t even start the clean-up with no water to mop with. 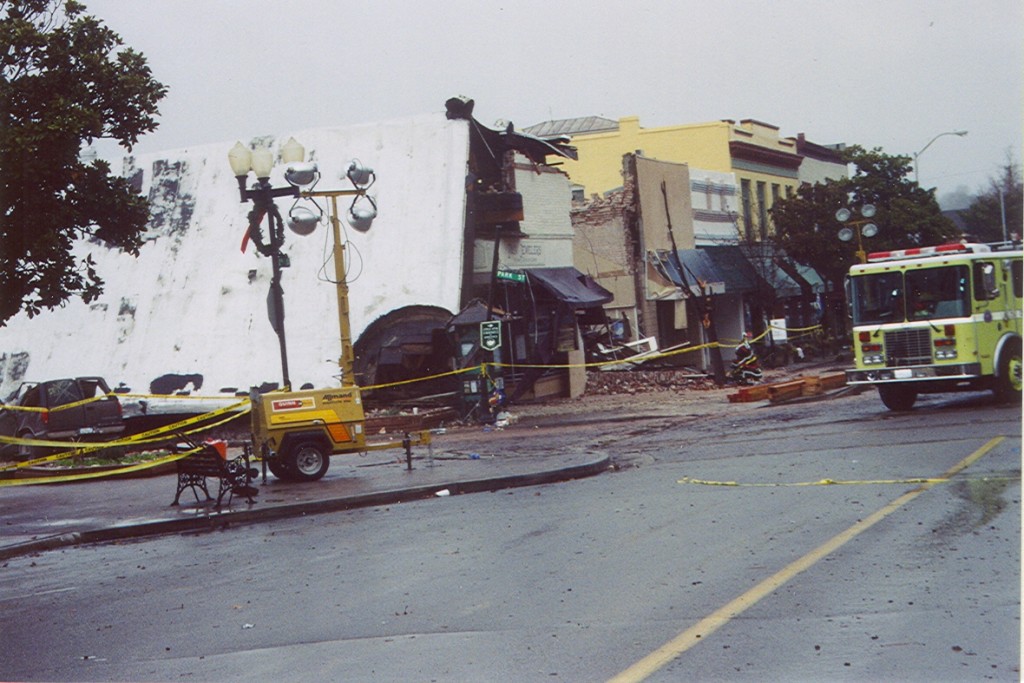 Believe it or not, an RV is a great place to be in an earthquake. Sure, it bounces a lot, but it’s designed to. No worries about structural damage, falling brick walls or chimneys. Everything is more or less battened down, cupboards fastened, not enough room for a lot of breakable knick-knacks or priceless family heirlooms. When we got back we found that only a plastic storage box fell over in the bedroom, and an electric toothbrush and a bottle of deodorant fell in the bathroom. Otherwise, everything was copacetic. Even the stacks of book on the counter in the bedroom were intact, which was ASTONISHING considering how far the damn thing moved back and forth. The only problems we had were shared by all our neighbors in houses, namely …

It started to get real cold. We have a propane furnace that hasn’t worked for a while, so we use electric space heaters. (Even if the furnace WAS in working order, it needs electricity to run the blower.) We went out to eat dinner, came home to an RV that was even colder than before. It was supposed to get down to about 40 that night, and I’m pretty sure it did. Probably no better than 45 inside. No TV except a teeny Casio with a 2-inch screen that I keep in the car for emergencies. No computers, no phone. So we bundled up, spent the night, got up and seven AM … and STILL no power. It actually seemed WARMER outside. We were hearing that 75,000 customers lost power and now all but 1600 were back online … and we were in the 1600. We went out to IHOP for breakfast, but mostly to get warm. Back home and … power! … after 21 hours.

Water came back a few hours after that, but we’ve been told not to drink it until further notice, I presume because sewer lines broke along with the water main and the two mixed together … So we bought drinking water and at LAST we can take showers.

They’ve told us to expect aftershocks during the next week. I hope not. And there’s about a 10% chance that what happened … gee, exactly 24 hours ago … will in the future be seen as a FORESHOCK to the REAL quake …

The good news: The seismologists really don’t expect another quake of this size in this area for another 50 years. But as of now, we survived the biggest quake ever measured in San Luis Obispo County!