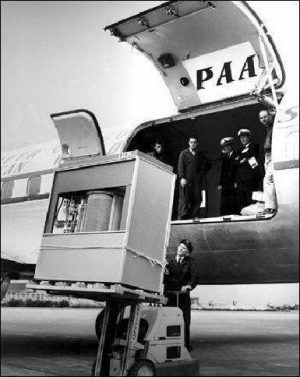 Some of you may have seen this photo that’s been circulating on the Internet, purporting to be a 5MB hard drive from a computer in 1956:

Don’t worry, I’m not going to bust any bubbles. I’ve verified it at Snopes.com, and it really is the hard drive from an IBM 305 RAMAC, one of the last computers to use vacuum tubes, in use until 1961.

This little baby measured 60 by 68 by 29 inches, including the 50 heavy aluminum disks, pneumatic controls, and an air compressor. It weighed about a ton. It was state-of-the-art for its day. Before this, data was stored on punch cards or magnetic tape, making access pretty slow.

It got me to thinking. My first desktop computer came with a 200MB hard drive, but I got into the game rather late. (Lee’s first computer didn’t even have a hard drive.) That’s 40 times the capacity, and it all fit into a unit about the size of a paperback book.

Now look at this picture: 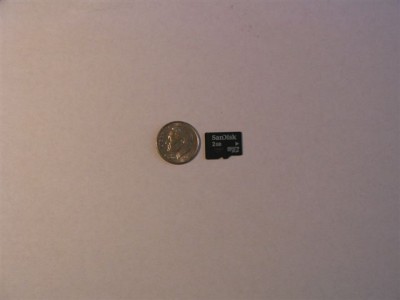 On the left is one thin dime, one tenth of a dollar. With it and $4.90 you can get a cup of coffee at Starbucks, or with $3.40, a gallon of gas. On the right is the 2GB memory chip from my new cell phone. You can store many thousands of pictures on it, or record video pretty much until the battery runs down.