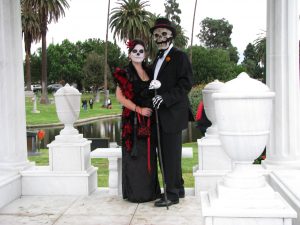 We had a lot of fun last Halloween at the West Hollywood street party, which happens on about mile of Santa Monica Boulevard and features some of the wildest costumes you’ll ever see, some by make-up professionals, many by WH’s vast gay community. Last year we arrived quite early, when nothing much was happening, and stuck around for a few hours. I recall it took us a while, but we eventually found a parking place on the narrow, crowded streets only a few blocks from the Boulevard. But things weren’t really jumping until around the time we left, so we decided to go a bit later this time, and pay to park in the Pacific Design Center, at the west end of the event.

Now, I don’t want to brag, but in the almost three years we have lived in Los Angeles, I’ve learned my way around pretty well, especially in the Hollywood and Glendale areas, and on west into Santa Monica and Culver City and Venice. So I set out, not consulting the map, and we were soon mired in traffic.

They estimate that 500,000 people go to this shindig. Half a million! I have no reason to doubt it. Pretty soon I was turning off the main streets every chance I got, hoping for some luck, squeezing past other cars also looking in vain for a spot on the very narrow streets, but none was forthcoming. After about an hour of frustration we decided to pack it in and head out. And I never even came in sight of the PDC. I know it was there somewhere—it is probably the most ostentatious architecture in Los Angeles, one gigantic bright blue glass building and one gigantic bright green glass building, both illuminated at night—and I never even saw it. Amazing.

We decided to go to Norm’s, our favorite all-night diner, on La Cienega, but it was too crowded, so we went back to our neighborhood and had dinner at the Sizzler four blocks down Hollywood Boulevard from our apartment. Then we headed home and …

Maybe the worst I’ve ever seen. We tried Franklin, and it wasn’t moving, and I already knew Sunset was bad, and so were all the main cross streets. So we had no choice but to crawl down Hollywood Boulevard along with a thousand carloads of people whose intention, apparently, was to get to the famous blocks of the Boulevard starting at Vine Street and party all night. Most were in costumes. There are many, many nightclubs down there. And then there were the smart ones, who had somehow found a place to park or arrived by train and were walking. We didn’t have that option. So we crawled. One hour, one solid hour to get four blocks to our street!

Next year I figure we have two options:

But the next day was Dia de los Muertos, the Day of the Dead, a largely Mexican celebration which has also become a big deal in this town which is now almost 50% Hispanic. There’s a big one in MacArthur Park and an even bigger one—maybe even bigger than the West Hollywood Halloween—in East LA, but we decided to return to what may not be the most authentic but is certainly the spookiest Day of the Dead, at the Hollywood Forever Cemetery. Ever been in a graveyard at night?

In case you’re not familiar with it, the Day of the Dead is a two-day celebration where the dead are remembered and honored. Traditions vary, but some constants are marigolds (flor de muerto), sugar skulls (calaveras), and pan de muerto (bread of the dead). People wear calacas, skeleton faces. In Mexico, part of it is very much like Halloween, with children going house to house for candy or small change. 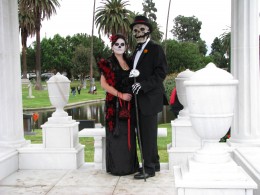 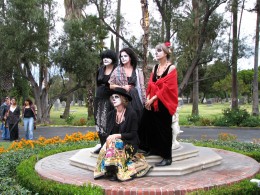 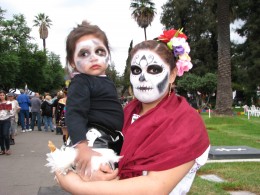 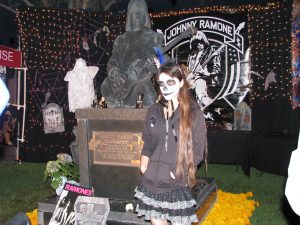 But the centerpiece is the altar, which can be a simple stand with a picture and maybe a picture of Jesus or the Virgin and a bottle of tequila or Corona cerveza, or incredibly elaborate constructions. In Mexico people visit graveyards, but I’m not sure if they erect their altars there, or spend the night. I suspect it varies with local tradition. The Wiki article singles out the Hollywood Forever event as a blending of old and new sensibilities. Well, what would you expect from Hollywood Forever, where both Rudolph Valentino and Johnny Ramone are among the dozens of celebrity corpses? There are some fairly traditional altars … and then some like last year, where we saw one devoted to dead rock and roll stars—with skeleton faces inked in over their own faces on album covers—and Mel Blanc’s cartoon characters. (Mel resides here: Epitaph, That’s All, Folks!) Some altars are political, such as the large one honoring Iraq and Afghanistan war dead, and clearly opposed to the war. There were two altars devoted to saving unwanted pets. 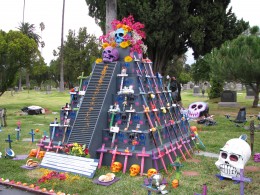 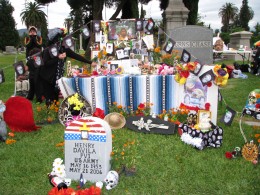 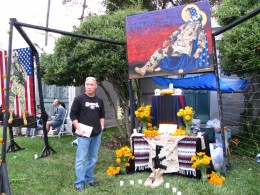 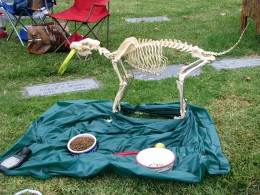 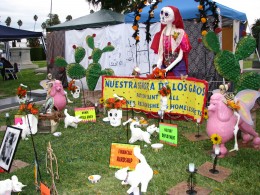 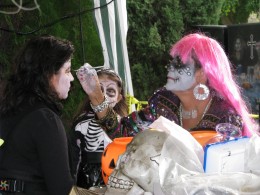 Burritos and churros are sold, along with souvenirs. There are three large stages and a couple smaller ones. The stage out on the island in what I think of as Swan Lake—because it’s ruled by a few very territorial and aggressive swans—is mostly devoted to performances by children, and the one at the far end of the pond that is the centerpiece of by far the most ostentatious memorial in the cemetery—the tomb of Douglas Fairbanks, Sr. and Jr.—is for more professional dance troupes. The third is behind the Valentino mausoleum, and is more Mexi-pop oriented. We were watching a group from Vera Cruz, six men and six women, putting on a dynamite dancing show when suddenly the music system broke down. They didn’t even pause, they continued pounding the wooden stage with their feet in perfect synchronization. Now, that’s professionalism, that’s show biz! And how well they must know these routines! In some ways it was even more striking without the music than with it. 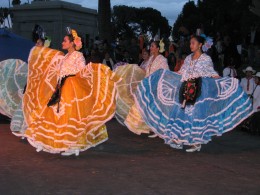 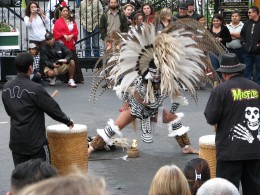 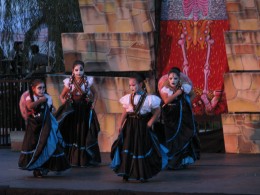 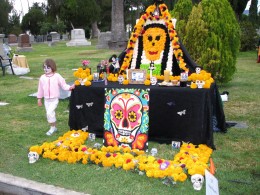 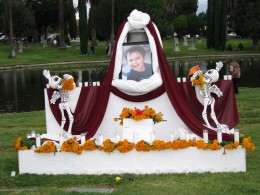 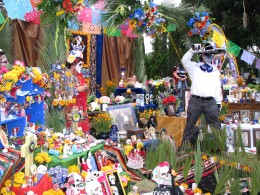 Even the most confirmed phasmophobic (look it up) wouldn’t be too freaked out at the festival itself, where the crowds soon reached the point of discomfort. But walking in and out of the place … well, they don’t have streetlights in cemeteries (who would need them?), and as we left it was very, very dark, with the looming shapes of tombstones and the ghostly, ghastly white faces of people arriving … BOOO!! Creepy! 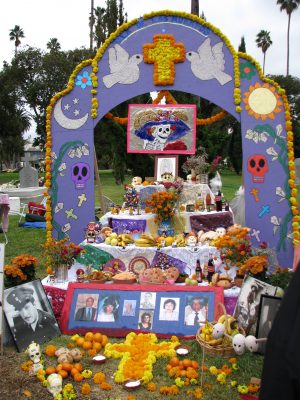 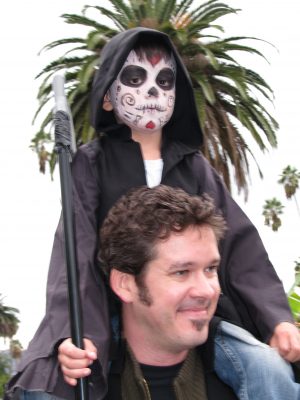 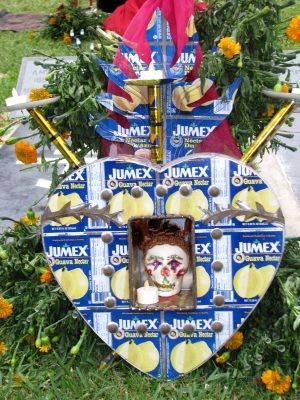 There’s not much point in more descriptions from me. Lee will post a lot of pictures of the altars and the people. Don’t be frightened!