We end with self realization 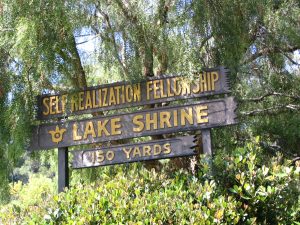 I’d like to say we came down the hill, around a corner … and there it was! The blue Pacific Ocean, looking much the same as when Balboa was the first white man to lay eyes on it. If Sunset had sidewalks all the way, that’s how it would have happened. But since we’ve had to skip large chunks, and elected to skip others, and since we like to end a day’s walk going downhill … we started at the ocean for our last day. 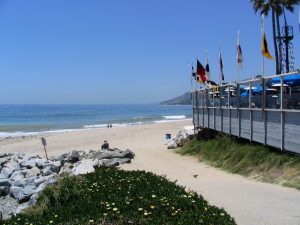 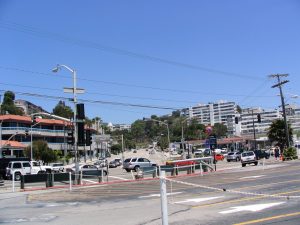 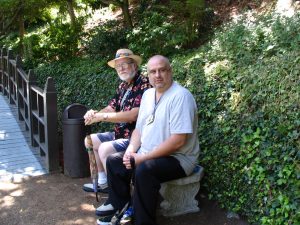 We met our friend Random at the intersection of Sunset and Pacific Coast Highway, decided we were all feeling a tad hungry, so we went to Gladstone’s to get a bite to eat. After almost half an hour we were seated outside on the edge of the sea, and …

OUCH! The tabletops and seats were made of concrete that had been baking in the sun all day. After a minute I started to feel like my ass was being poached. Lee and Random felt the same way. I don’t know how all those other people out there were handling it. Maybe it’s a Cahleefornia thing. Maybe they have better insulation on their butts out here. I’m from Texas, Random is from New Orleans, and Lee’s from Oregon. We moved back inside and sat in a booth in the bar.

There we feasted on crab cakes, lobster rolls, and fishin’ chips. We feasted so well that I thought of suggesting that we might now be too heavy for the trek up the mountainside … but I thought better of it.

Soon I was waiting outside, and was approached by a man pushing a grocery cart full of garbage. He had about three teeth. I expected I was about to be hit up for some money, but no. He started discussing Gladstone’s, asked if I’d enjoyed my lunch. I said I had, though it was a bit overpriced. He extolled the virtues of another restaurant just up the beach in Malibu, and said they also had a branch in Marina del Rey. No shit, I thought. Soon, I’m not quite sure how, we were discussing the Michigan State/UCLA Rose Bowl game of January 1, 1966. I told him UCLA won, 14 to 12. He was sure it had been the Spartans who prevailed. He said Bubba Smith had been on that team, right? And I said, yeah, I met Bubba once, briefly, at MSU, and he had gone to high school near my home town, in Beaumont, Texas.

It was all a little surreal. Before we got away from him he did hit me up for some money, though, which brought it all a bit more down to earth. 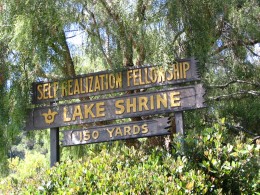 Then it was up the hill. Before long we reached our goal: The Self-Realization Fellowship Lake Shrine Temple. This is the jewel in the crown of the SRF, which we had visited previously at its Hollywood Temple on Sunset. The church was founded in 1920 by Swami Paramahansa Yogananda in Los Angeles. The Swami died (or whatever swamis do in place of dying) in 1952, but before that he made some extremely astute purchases in real estate. I don’t know what the church’s land in Hollywood is worth, but their acreage there in the Palisades, a stone’s throw from the beach, must be astronomical in value. And all tax free!

I’m not implying he was a scoundrel, like his Hollywood neighbor L Ron Hubbard. In fact, from the little I know of his philosophy, he seems okay. He wanted to combine all the world’s five major religions—probably impossible, but it’s worth a try; think of the suffering that could be avoided! 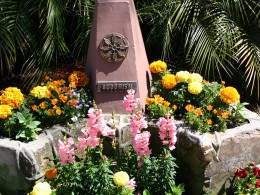 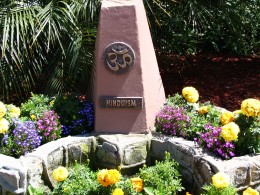 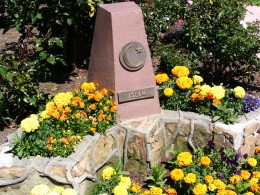 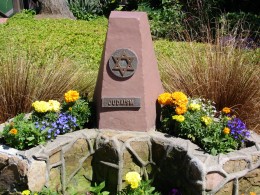 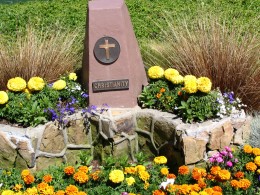 Anyway, the Lake Shrine has been there quite a while. I visited it several times in the ’60s, and back then it was full of hippies. I don’t know what Yogananda would have thought of the various substances these folks had smoked and ingested before coming there, but this was supposed to be a place of meditation, and there was some meditation going on, mostly to whispers of “Groovy!” and “Oh, wow!” and “The colors! The colors! I’m a butterfly!” 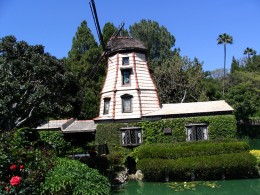 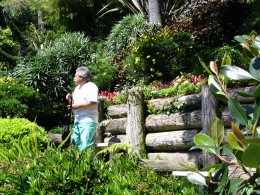 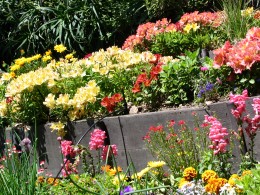 We had thought of bringing a picnic lunch, but when we got there we were glad we’d eaten before. Not that it wouldn’t be a wonderful spot for al fresco dining, but the signs were pretty explicit. This was a place for silence and meditation, not really to be disturbed by the sounds of munching. 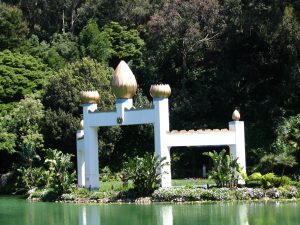 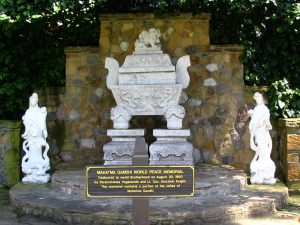 It is one of the most incredibly beautiful places I have ever visited, and I’m seen some doozies. You get the impression that every blade of grass has been set out there after careful consideration. Random pointed out that somebody had been sweeping the dead leaves from the surface of the green lake, and it probably wasn’t the swans. There were massive koi lurking just below the surface or resting in the shade of overhanging shrubs, and turtles, red-eared sliders, slowly paddling around doing their turtle thing. Flower beds burst with the radiant colors of annuals. 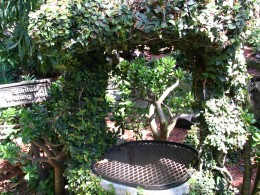 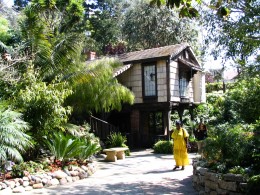 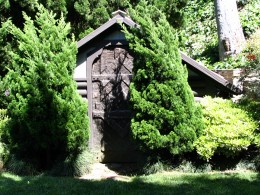 The whole place is arranged so that there are dozens of places for relative privacy. You turn a corner of the path and there is a bench slightly up the hill with someone sitting on it, doing nothing. There is a shrine to Gandhi, which claims to contain some of his ashes. There are quotes from the Bible, the Koran, the Bhagavad Gita. This is my kind of church. No hard sell, just a few pamphlets scattered around. Nobody shoving his hand into your pocket. There are donation boxes here and there. I dropped in some change. 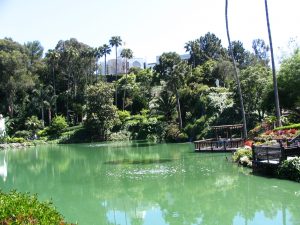 The temple itself is at the top of the hill, up a very long staircase, and the gate was locked when we were there. The sign says the public is welcome on Sunday from noon to 4. Maybe we’ll amble up there one of these days … but the garden and lake is the main attraction, unless you’re one of the faithful.

I’m a wordsmith, but I’m not up to the Lake Shrine. Lee will do a better job with her pictures. She took some great ones.

So back down the hill … … and there it was! The blue Pacific Ocean, looking much the same as when Balboa was the first white man to lay eyes on it. We burst into a spontaneous song—in Spanish! Which I don’t even know!—and sprinted heedlessly across eight lanes of traffic to a chorus of blaring car horns. We vaulted over the retaining wall, kicked off our shoes, and plunged fully-clothed into the sparkling crystalline waters (which we had just heard on the radio is the fourth-most-polluted beach in Cahleefornia, but never mind that!) and cavorted like dolphins as John Williams music swelled in the background and the credits began to roll …

We did none of that, of course. But it’s a swell ending, don’t you think?