Once Upon a Time … in Hollywood

… or, The Ninth Quentin Tarantino Film. QT has said that he will probably make ten films and then retire. Actually, by my count, if you consider Kill Bill, Part One, and Kill Bill, Part Two as one film, and that he only directed the Death Proof part of the double feature Grindhouse, he has directed … 8½ films. How about that? 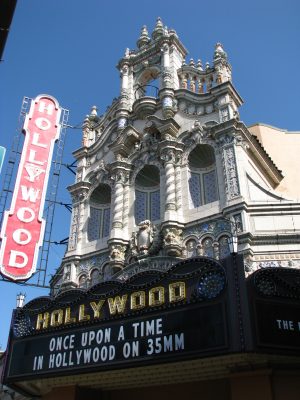 I believe that QT is a cinematic genius, but he is definitely not for everybody. Like those other geniuses, Kubrick and Kurosawa, there are elements in his films that will not appeal to everyone. With QT it is violence, of course. I guess Jackie Brown was his least violent film. Reservoir Dogs is probably the bloodiest. This one goes along amiably and peacefully for over two hours of its 161-minute run time. But then …

I have to issue a MAJOR SPOILER WARNING here, because if you have not heard how it ends, it will stun you. Like Inglourious Basterds, this is history as it should have been.

It’s 1969 in Hollywood. I was there! I was living mostly on the street. And on my 22nd birthday four followers of the deranged cult leader and would-be messiah, Charles Manson, drove up into the Hills of Beverly to 10050 Cielo Drive, where they butchered Jay Sebring, Abigail Folger, Wojciech Frykowski, eight-and-a-half-month-pregnant Sharon Tate, and shot eighteen-year-old Stephen Parent.

(I have to pause here for a weird aside. Stephen Parent just happened to drive up as the murderers were about to enter the house. He was there to visit William Garretson, who was the caretaker of the property. He was confronted by Charles “Tex” Watson and shot four times in the chest. He was a good friend of a man I would later get to know as a good friend of my own. I shouldn’t mention his name, and so I won’t.)

(One more aside. The house was frequently rented out, as it was to Roman Polanski and Sharon Tate. Previous residents included Lillian Gish, Cary Grant and Dyan Cannon, Henry Fonda, Paul Revere and the Raiders, and Candace Bergen.)

I remember learning about the massacre. Manson was described in all the coverage as a “long-haired hippie.” In other words, he looked like me! Holy shit. People started looking at those of us who were promoting peace and love in a different way. Shortly after that I moved to San Francisco.

The killers were Watson, Susan Atkins, and Patricia Krenwinkle. Linda Kasabian waited at the car and served as a lookout. But what if someone else had confronted them before they entered the house …

That someone else is Clint Booth (Brad Pitt), a stunt double who happens to be stoned out of his mind after smoking a joint dipped in LSD. Clint can take care of himself, as we saw previously when he threw an arrogant Bruce Lee into the side of a car, denting it severely. The man he doubles for is Rick Dalton (Leonardo DiCaprio), a star of B-movie westerns who is now slipping into C-movies and TV guest spots. Clint is happy-go-lucky, seems to have not a care in the world, and is satisfied with his friendship with and role in Rick’s life, which is basically gofer, driver, and all-around handy man. Oh, yeah, and stunt double. Rick is desperately insecure, as he reveals to an eight-year-old child actress he is about to shoot a scene with. (Julia Butters, who is frighteningly good.) Clint just happens to be at Rick’s house next to the Polanski-Tate house, with his pit bull Brandy. He berates the killers for their smoking, clattering POS Ford Galaxie, and they decide to kill him before the main event.

Bad idea. They enter the house, and Brandy chews Tex’s balls off, as well as other slightly less important bits. Clint kills Patty by repeatedly bashing her face into a wall-mounted telephone, and messes up Susan Atkins almost as badly. I mean, they basically have no faces left when he’s done. Then Rick finishes Susie off with … wait for it … a flame thrower! And yes, there is a reasonable explanation for why he just happens to have a flame thrower in the pool shed.

It was glorious. I could watch their deaths over and over and over, and plan to, when I get the DVD. Why oh why did those innocent people have to die, and those scum-sucking dirtbags live?

Two of the killers are still alive. Tex has found Jesus. Fuck him, and fuck Jesus if he’s forgiven Tex, too.

Krenwinkle has now become the longest-serving female prisoner in California. She achieved that status after Susan Atkins died. She has now been denied parole 14 times, but poor Debra Tate will have to drag herself back to another hearing in 2022 to point out that her sister Sharon is still dead, and unless Patty can rectify that, she deserves to fucking rot for the rest of her life.

Susie’s story is the most satisfying. She was denied compassionate parole in 2008, on her deathbed. Those in favor of letting her go pointed out that she “posed no threat to the public,” since she was so fucked up they had already cut off one of her legs. I don’t dispute that. Debra Tate and others opposed it, as did I. When it comes to people like this, it’s all about the punishment, to me. There is no possible rehabilitation, no possible atonement. My views are totally Medieval in this regard.

So, now that I have that ranting out of the way, what about the film? How was it, as a work of art? I think it is a masterpiece, and one of QT’s best. The script is as tight and wicked and unexpected as his writing always is. The acting of both the stars is among their best, particularly Leonardo D. Margot Robbie is wonderful as Sharon Tate. She is played as a little naïve, and still enchanted by this Hollywood life. At one point she decides to go into the Westwood Theater and take a look at herself in The Wrecking Crew, which I recall as a real stinker, the worst of Dean Martin’s Matt Helm movies, which is a very low bar indeed. But it must look different if you are in it. She has a blast, putting her feet up, and looking around happily when people laugh.

The production design is out of this world. Like I said, I was there, I remember this! The designers dressed several blocks of Hollywood Boulevard to look as seedy as they were in 1969. There was resistance to that from some of the businesses, but when filming was done a lot of them kept the facades up, as they were kind of neat! The entire look of the film is retro. QT famously has refused to get on the digital bandwagon, and shoots on 35MM film. It has been processed to have that slightly grainy, slightly off-color look of films of that period. We were lucky enough to see it at Portland’s Hollywood Theater (how about that? Hollywood!) with a 35MM print.

There was not a lot of CGI. Mostly it was real. You want to know what kind of clout QT has in Los Angeles? They closed down part of US 101, the Hollywood Freeway for two hours, noon to 2 PM, so scenes could be shot of Pitt driving Clint’s huge Cadillac among period cars! The city had never done that, and may never do it again. A big party scene was filmed at the Playboy Mansion, where Mama Cass, Michelle Phillips, and Steve McQueen can be spotted. Several scenes were shot at Musso and Frank’s, where we dined from time to time.

Another scene was at the El Coyote on Beverly Boulevard, our favorite Mexican restaurant, where all the waitresses wear folk costumes and most of them seem to be fat and jolly. It used to be quite the gathering place. Sadly, it is where the four murder victims ate their last meal. I hadn’t known that. Wiki says the scene was shot in the very booth where Sharon Tate sat with her friends.

As always, the music QT has chosen is perfect, taking me back to those innocent days, and always appropriate to the scene.

I’ve probably gone on too long already, and all I can say is that I find no fault in this film. I know some will object to the alternate history, but I’m a science fiction writer, I am familiar with dozens of alternate histories. They don’t bother me. It is a love letter to Hollywood, which is a place I also adore. It is full of inside jokes about Tinseltown and the things that have happened there. I’m sure I got only half of them, if that.

Finally, I’d like to suggest a setting for The Tenth Quentin Tarentino Film, another example of how history should have been. Clint and Rick and Brandy (definitely Brandy!) go to New York City to film an episode of Taxi. The production company rents them a small suite in the Dakota. And on the night of December 8, 1980, Mark David Chapman arrives as Clint is walking Brandy …