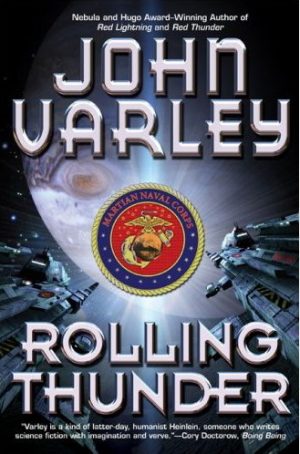 Lieutenant Patricia Kelly Elizabeth Podkayne Strickland-Garcia-Redmond – otherwise known as Podkayne – is third-generation Martian with a planet-sized chip on her shoulder. Her grandfather Manny was one of the first men to set foot on Mars. So Poddy has some equally planet-sized shoes to fill…

That’s why she’s joined the Music, Arts, and Drama Division of the Martian Navy. Though some may say her voice is a weapon in itself, Poddy passed the audition with a little help from some higher-ups. And now she’s going to Europa, one of Jupiter’s many moons, to be an entertainer. But she’s about to learn that underneath the song and dance routines, there can be plenty of danger to go around in the Martian Navy, even if you’ve just signed on to sing….

This is well-crafted science fiction, written by a master, enjoyable by all. Although reading the two preceding books of the series is recommended, enough of the back story is conveyed to enable anyone to enjoy this book on its own.

….it’s a sweet space romance, a kind of comic idyll following on Red Thunder and Red Lightning, the hard SF actioners that preceded it. Sure, there’s action, and there are amazing, mysterious, musical aliens that only Varley could create. But mostly it’s the Freaks and Geeks-style story of a late teenager discovering herself, getting laid, and starting a band.